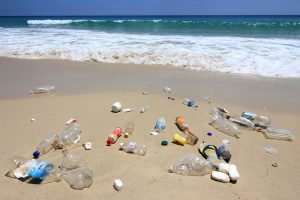 Companies from throughout the plastics value chain have committed more than $1 billion to reduce plastic waste by improving waste management systems and cleaning up existing pollution.

The Alliance to End Plastic Waste will focus its significant resources on developing waste collection infrastructure, innovating in recycling and product design, educating consumers about waste, and cleaning up plastic in the environment.

The group has committed at least $1 billion and has a goal of investing $1.5 billion over the next five years.

The project was officially announced on Jan. 16 in a broadcast live from London, where representatives from several companies expanded on the impetus behind the alliance and what it will focus on.

A key component of the group is its collaborative approach, explained Bob Patel, CEO of LyondellBasell, a global plastics manufacturer.

“If we did it by ourselves, we couldn’t possibly have the impact that we can now have through this alliance and be able to prioritize where the impact can be the greatest,” he said.

The project will involve researching new technologies to improve waste management. Dow Chemical Co. CEO Jim Fitterling noted that’s an area in which industry can be very helpful, because companies bring research budgets and the ability to scale up projects.

Peter Bakker, CEO of the World Business Council for Sustainable Development, described the new effort as “unprecedented.” The project was discussed a year ago at a meeting in Montreal. There, stakeholders envisioned a framework where companies could work together to develop solutions to plastic waste, Bakker said.

“It’s unprecedented in size, in scope, in positions in the sector and geographic spread,” he said.

Laurent Auguste, senior executive vice president at waste management and utilities company Veolia, added that the alliance is not just about making “lofty commitments” before going back to business as usual. Instead, he said the group will focus on real projects harnessing the skills each company brings to the table, in engineering, material design, resource optimization and waste management.

Although the project represents a broad coalition of plastics stakeholders, it received quick criticism from environmental groups. Environmental activism organization Break Free From Plastic released a statement even before the official launch of the alliance, describing the effort as a way for companies “to preserve their ability to produce cheap single-use plastics.” The release included perspective from Greenpeace, the Global Alliance for Incineration Alternatives (GAIA), UPSTREAM and more.

The group will initially focus on five Southeast Asian countries, where some 60 percent of marine plastic waste is estimated to originate. Auguste explained that many countries in the region have seen fast-developing economies and a growing middle class, all of which has changed consumption patterns.

“At the same time, there has been a lack of investment in waste management infrastructure,” he said.

The project’s work in Southeast Asia will draw on the work of Circulate Capital, a project of Closed Loop Partners and the Ocean Conservancy. Circulate Capital provides financial resources for entrepreneurs to develop collection, processing and other infrastructure solutions in Southeast Asia. The organization will continue to act as a business incubator as it works with the alliance, CEO Rob Kaplan explained during the roundtable discussion.

The alliance will have four key areas of emphasis. First on the list is infrastructure development, primarily building up waste management systems. “We’ve got to collect the waste at the source where it occurs,” Patel said.

Education and engagement with the public will also receive significant attention. “We’ve got to educate consumers about the impact of how plastic waste is collected and so on, and governments on how collection systems can be instituted,” Patel said.

Lastly, the alliance will include efforts to clean up existing plastic waste in the environment, Patel said.

“We’ve got to move on all four fronts,” he said. “It’s not just one but all four at the same time.”

The alliance has already begun working on specific projects. One partner organization is pyrolysis company Renewlogy and its ocean plastics-focused project Renew Oceans.

Renew Oceans focuses on collection, conversion and compensation for waste pickers in the Ganges River region in India, explained Priyanka Bakaya, CEO of Renewlogy and Renew Oceans. The project uses a “bio-fence” system to capture plastic as it flows down the river, and it also involves installing reverse vending machines to capture plastic waste on land.

Collected material is processed using Renewlogy’s pyrolysis technology. When the resulting fuel is sold, the waste pickers receive compensation from those proceeds.

Renew Oceans is one of the first collaborations the alliance is working on. Fitterling said the project stood out for its high-impact potential, and its results will be scalable in other parts of the world, Fitterling said.