For well over a decade, there has been a steady stream of information and concern over the plastic gyres and marine debris in the ocean.

But the issue took a significant turn in 2015. That’s when the academic journal Science published Jenna Jambeck’s seminal paper “Plastic Waste Inputs from Land into the Ocean,” which quantified the amount of plastic leaking to the environment from countries around the world.

Among other findings, the research team concluded that 80 percent of marine debris plastics come from land and that one of the primary mechanisms contributing to plastic in the environment is mismanaged waste.

As this article will lay out, since Jambeck’s publication, a wide range of actors have made significant commitments and organized themselves to push for improvements. And many of the actions have included priorities tied to plastic recycling – either through boosting use of recycled resin or setting goals for higher recovery rates.

However, real progress on a global problem calls for real buy-in from all global players and nations. Much of the world is coming together to combat an issue that threatens the seafood chain (the source of protein for more than a billion people) and a wider marine economy worth hundreds of billions of dollars to nations around the globe. Unfortunately, the reality now is that the collaborative work being put forth could be advanced faster if not for the apathy of one key stakeholder: the U.S. government.

As noted above, Jambeck’s research analyzed the impact of “mismanaged waste” – that is, material improperly disposed, dumped or littered and that ends up released to land and water due to the lack of appropriate waste management and infrastructure.

In the countries where plastic leakage is high – notably, China, Indonesia, Vietnam, Thailand and the Philippines – there are population centers near coastal areas or waterways, and those communities often lack adequate solid waste management and collection systems for municipal waste, especially in poorer areas. 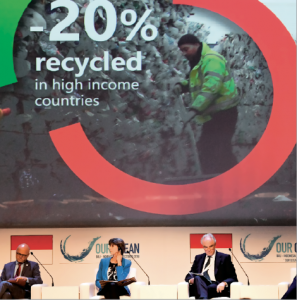 The Our Ocean Conference in Bali in 2018 brought together government leaders and other key stakeholders for dialogue around the global marine debris issue. A number of noteworthy commitments and collaborations were announced at the event.

The data points offered by the Jambeck study provided a launching point for a wide range of industry- and nonprofit sector-funded research projects to identify solutions. Examples include the Ocean Conservancy’s “Stemming the Tide” and “The Next Wave” reports as well as a privately funded follow-up report from Jambeck and her colleagues called “Sea of Opportunity,” published in early 2017.

Later in 2017, the David Attenborough-narrated series “Blue Planet II” was released by BBC. If pictures are worth a thousand words, the episodes might be described as an epic poem – they elicited visceral reactions from viewers using images such as an albatross feeding plastic to its baby chicks.

The resulting backlash from individuals around the globe has been enormous. A recent consumer survey from Waitrose & Partners Supermarkets indicates shifting consumer attitudes – and actions – toward plastic packaging. According to Waitrose, 88 percent of people who watched “Blue Planet II” say they have changed their lifestyles as a result. Some of those individuals moved to action are in positions of influence. England’s Queen Elizabeth, for instance, banned single-use plastics from the royal estates.

Not surprisingly, companies are responding to the concerns of their consumers. The Ellen MacArthur Foundation and the U.K.’s Waste Resources Action Programme (WRAP) have sponsored the U.K. Plastics Pact, a take on the New Plastic Economy principles, which aims for the following by 2025:

More than 40 companies in the U.K. have signed on to the initiative, and as intended, the model is spreading, with Chile set to launch its own Plastic Pact later this year.

Anti-plastic sentiment is also driving voluntary corporate actions in the U.S. Grocery giant Kroger announced this summer it will be phasing out plastic bags at checkout across its chains by 2025. Similarly, Starbucks, Sandals Resorts International and Caesars Entertainment have all announced efforts to end use of plastic straws or bags.

Going after marine debris at its source

While those individual initiatives certainly have the potential to improve society’s use (and end use) of plastic items, the most impactful efforts may be those being developed through international partnerships.

For example, the Our Ocean Conference was hosted in Bali, Indonesia in late October. While focused on ocean conservation in general, the conference included substantial focus on marine pollution. It was there that the Ellen MacArthur Foundation announced The New Plastics Economy Initiative Global Commitment, a collaboration with UN Environment to “eliminate plastic waste at source.”

More than 250 companies have signed the formal endorsement of the framework for a circular economy for plastics. Those companies represent more than 20 percent of all plastic produced globally. The list includes consumer goods businesses such as Danone, H&M Group, L’Oreal, Mars Inc., PepsiCo, The Coca-Cola Company, Unilever; major packaging producers such as Amcor; resin producers like Novamont; and resource management specialist Veolia – to name a few.

Another noteworthy collaborative development is the Circulate Capital impact fund, which will be dedicating $100 million from companies including PepsiCo, Procter & Gamble, Dow, Danone, Unilever, and the Coca-Cola Company to incubate and finance ocean plastics solutions. The goal of the fund is to remove some of the capital-related barriers to waste and recycling infrastructure development in regions where mismanaged waste is a major source of plastic leaking to the environment.

Several nations also stepped up at Our Ocean in Bali, making substantial financial commitments to combat marine plastic pollution. Norway committed $38 million between 2019 and 2022 to the WorldBank ProBlue initiative. The EU earmarked $10.2 million to support a transition to sustainable consumption and production of plastic. The European government body’s contributions also will help to significantly to reduce marine litter by supporting European approaches, policies and business models. An additional EU contribution of roughly $19 million will support Pacific countries in addressing issues related to health and well-being, marine litter and biodiversity conservation.

Meanwhile, the Netherlands committed $11.4 million between 2018 and 2022 to promote innovations to reduce microplastic emissions from plastic litter, car tires, paint and clothing into the aquatic environment and for research into the effects of on human health. Japan made a commitment of $167 million toward marine litter monitoring technology and international cooperation with Asian countries.

Beyond commitments, government bodies are also taking tangible steps on the issue. The EU Parliament voted on Oct. 24 to support a ban on some single-use plastics (straws and cutlery) and reduce use of others. Malaysia, which is the fourth-largest largest plastic exporter in the Association of Southeast Asian Nations (and 25th largest globally), has launched a roadmap toward zero single-use plastic packaging by 2030. The strategy is recognition of the severity of mismanaged waste and plastic in Malaysia and is part of a set of policies and incentives designed to improve waste management there.

Similarly, both Costa Rica and India are poised to announce similar national efforts to eliminate single-use plastics by 2021 and 2022, respectively. According to UN Environment, more than 60 countries have introduced bans and levies to curb single-use plastic waste.

And finally, of course, there is China and its National Sword policy, the ultimate example of the global adjustment and refocus on self-management of plastics. China’s ban on many types of recyclables imports is certainly about more than ocean plastics, but it is a clear example of a country taking strong action to respond to environmental concerns among its own population. In this context, it’s also notable that the 14th Annual International Conference on Waste Management and Technology will be hosted in Beijing in March 2019, and the theme is building a zero waste society.

The cost of staying on sidelines

The point of this litany of initiatives is to show just how much momentum has been gained in regards to marine pollution. It is an issue that has truly gone global with participation from countries around the world, with one major exception.

Representatives from the U.S. government, though present at the Bali Our Ocean event (through USAID), did not play a leadership role. This is an unfortunate fact, since at one time, the U.S. did have this positioning – the conference was founded in 2014 by the U.S. State Department and former Secretary of State John Kerry. The lack of participation by the U.S. participation was contrasted by activities spurred by ministers from the EU and other nations, who hosted side events and gatherings to address ocean plastics.

It is true that at Our Ocean, the U.S. State Department, via USAID, committed two $500,000 grants between 2018 and 2022 to communities in Indonesia and the Philippines, subject to the availability of funds. But that spend is just a fraction of what has been put forth by nations with much smaller economies.

Also, at the G7 Summit in Canada this past June, all members except for two, the U.S. and Japan, pledged to combat ocean pollution through the G7 Ocean Plastics Charter. However, it appears that despite not signing the charter, Japan still plans on being financially committed in the region (see the earlier commitment at Our Ocean). The U.S., meanwhile, seems apathetic at best.

Standing on the sidelines as the mismanaged waste and ocean plastic conversation moves ahead does not position the U.S. or its business sector well.

U.S. companies and groups can get involved in initiatives on their own, and numerous examples of this have been laid out above. But governmental stakeholders nevertheless have an important role to play.

At Our Ocean, for instance, the German Federal Ministry for Economic Cooperation and Development worked to set up programming to showcase German companies using recycled content as well innovative recyclable packaging design and recycling technologies coming out of their country. German representatives also put forth policy positions to nations that are actively seeking solutions for their plastic waste issues.

That’s the kind of dialogue in which the U.S. has chosen to not engage. The private sector is clearly ahead of U.S. policymakers in understanding the need for action as they sign commitments and invest money in impact funds. However, the isolation of the U.S. from these conversations is ultimately going to create competitive disadvantages for U.S technology providers, recycling companies and others.

And all the while, the ocean plastics issue – and its anti-plastic repercussions – will continue to grow.

Anne Johnson is a principal and vice president at consultancy RRS (Resource Recycling Systems). She is an expert at applying life cycle thinking to products and systems, and she has served as a strategic advisor for numerous companies, government panels and trade groups. She can be contacted at [email protected]