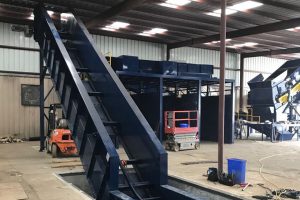 Upgraded fiber sorting equipment was recently installed at a MRF in Florence, Ala.

In different corners of the country, recycling facility operators have recently upgraded their lines as markets shift and the material stream continues to evolve.

Spending for a cleaner stream

On the coast of New Jersey, a county government is collaborating with a local materials recovery facility (MRF) operator to invest millions in facility upgrades. The spending is a direct response to global recycling market fluctuations: 2018 marks the first year the 30-year-old recycling operation in Ocean County, N.J. operated at a loss.

The Northern Ocean County Recycling Center MRF in Lakewood, N.J. will receive several significant equipment shifts that county officials anticipate will produce cleaner materials. According to county officials, the spending was spurred by China’s import restrictions, which have stifled material movement, lowered prices significantly and led to a market in which buyers can ask for higher-quality material.

“Some changes to the recycling program and upgraded processing equipment are now needed to ensure the operation is financially secure for the future,” said Ernest Kuhlwein, Jr., director of the county’s solid waste management department, in a press release.

The county government recently allocated $4 million to the improvements. The MRF operator, Atlantic Coast Recycling, is expected to contribute about $1.5 million, according to a press release.

The upgrades include a glass removal and cleanup system, optical sorters for the paper line, additional screening technology, a new paper baler and other equipment.

In conjunction with the equipment upgrades, the county will fund “stepped up enforcement and educational programs,” added Gerry Little, an elected county official.

Besides the export market disruptions, material shifts, including the increase of OCC in the residential recycling stream due to the rise in e-commerce, have significant ramifications for the industry.

Those are clearly visible in Boulder County, Colo., where the county recycling center recently invested in facility improvements to handle the changing OCC stream.

The Boulder County Recycling Center, which is operated by Eco-Cycle, recently upgraded from a double-deck to a triple-deck OCC screen. The upgrade will help the facility “maintain high production rates while mechanically capturing increased amounts of cardboard, in particular, smaller pieces of cardboard the facility has been receiving more of recently,” according to a press release.

According to Darla Arians, resource conservation division manager for the county, typical e-commerce boxes are smaller than the type of OCC the older screen was designed to process.

“Now, we can spend less time on the fiber line pulling out small pieces of cardboard and focus our attention elsewhere,” she said in the release.

Besides the equipment, the recycling center expanded its presort station from a two-person to a six-person staff. The upgrade included additional chutes and conveyor equipment to handle contaminants. The county described these improvements as “a huge efficiency gain.”

A nearly $500,000 investment has brought upgraded sorting equipment to the recycling center in Florence, Ala., a city of about 40,000 residents in the northern part of the state.

City owned and operated, the Florence Recycling Center recently installed a FiberSort screen to help separate fiber from other recyclables.

“The fiber sort screen will change the game for us,” Rachel Mansell, recycling coordinator for the city of Florence, told Resource Recycling.

Three years ago, Florence switched from bins to carts with help from the Alabama Department of Environmental Management and The Recycling Partnership. That switch increased the amount of material collected through the curbside program, Mansell said.

The new equipment, she added, helps the recycling center properly process the increase in volume and gives it room to grow even more.

“With labor being the most costly part of recycling, automation is vital to the health of our program,” she said.

The upgrade was made possible by grant funds issued over three years from the state department. The first two years facilitated the equipment purchase, and this year the system was installed in its entirety. David Koonce, manager of solid waste, street and recycling for the city, added that the grant funding has “dramatically” improved the program.

The investment was first profiled in the Times Daily newspaper.

To the west, a Texas MRF recently installed equipment that will allow it to continue producing the same amount of material with less overhead.

The Rivers Recycling MRF in Kilgore, Texas is a small regional facility that processes between 1,200 and 1,500 tons per month, owner Jeff Craine told Resource Recycling.

The company recently installed a new infeed conveyor, replaced belts in a number of components and upgraded the rotors in its OCC screen. All told, it cost nearly $160,000.

“We just kind of took the time to get everything else up to speed,” Craine said.

Although the equipment installation wasn’t directly a result of the market downturn, it will help lower costs for the MRF, which has been hit by the market downturn for at least the past year. Having the new infeed conveyor means the facility can process the same amount of material with fewer workers, Craine noted.

The upgrades were first reported in the Kilgore News Herald.

Although the facility has been hit hard by prices, the company is under contract to supply recovered fiber to the Pratt Industries paper mill in Shreveport, La., about 80 miles away. So although prices remain low, the MRF can move its paper to market without having to landfill anything.