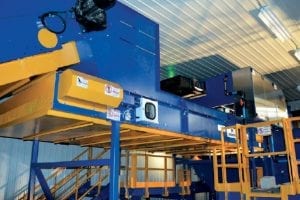 When it first opened more than a decade ago, the Durham Region Material Recovery Facility (MRF) in Ontario was Canada’s first dual-stream facility to use an optical sorter.

But the recyclables stream changes fast, and just a few years later the facility needed upgrades. When Miller Waste Systems took over its operation in 2012, the company immediately went to work installing a residue cleanup system to recover missed recyclables and upgrading the air compressors to improve optical sorter performance.

“Miller recognized the need to change the design of the container line to handle the ever-changing material composition within the Blue Box program,” according to Miller Waste Systems. “These continued Blue Box composition changes had resulted significant increases in both labor and equipment costs as it led to the implementation of a second shift.” 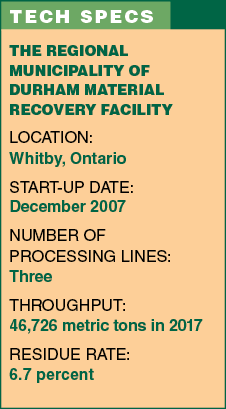 The retrofit boosted the container line throughput from six to nine metric tons per hour. It also allowed Miller to cut the evening shift, allowing it to sort more material on a single day shift.

“This upgrade enabled Miller to increase productivity by a minimum of 35 percent,” according to the company. “It increased the diversion rate while decreasing the residue levels, as well as decreasing the overall labor and equipment costs.”

The 70,000-square-foot MRF accepts curbside recyclables from about 211,000 households in eight communities near Toronto. Of those households, about 25,000 are in multi-family units.

For this year, the Regional Municipality of Durham estimates the MRF will market 42,072 metric tons and dispose of an estimated 4,237 tons of residue.

The biggest issues the MRF continues to deal with are cross-contamination between the fiber and container streams; problematic items such as film, straws, coffee cups and nursery pots/trays; and potentially dangerous materials including batteries, propane and helium tanks, and syringes.