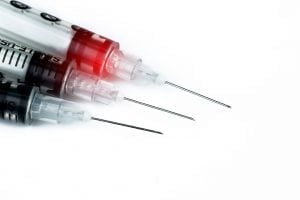 The hazards of needles to MRF sorters are well recognized, but new research puts an estimate to just how many workers are injured by them each year.

In a survey, more than half of MRF operators said they had employees injured by needles in a given year, according to a study by the Environmental Research & Education Foundation (EREF). Extrapolating survey results, researchers estimated that hundreds, if not well over a thousand, MRF workers are injured by needles annually.

“MRFs across the U.S. are working to decrease contamination in order to meet China’s new standards, putting more pressure on picking line workers to remove contamination and increasing the possibility of injury,” Bryan Staley, EREF CEO and president, stated in a press release. “Given the limited data available on needlesticks, this study aims to inform discussions and decision making related to worker safety.”

For the study, EREF collaborated with the Solid Waste Association of North America (SWANA). In the press release, David Biderman, SWANA’s CEO and executive director, noted that needlesticks are a growing occupational hazard at MRFs and other solid waste facilities.

Who participated in the survey?

The survey was conducted online, with follow-up emails and phone calls to clarify reported information. A total of 28 MRFs and seven combined MRF/transfer stations participated in the survey (no responses were received from mixed-waste processing facilities). Most were in the U.S., with a smaller number from Canada.

The respondents included a range of facility sizes, from small ones with limited operating hours  to large, highly automated MRFs working 20-plus hours a day. Nearly all accepted both residential and commercial material, although, on average, the majority of recyclables came from households.

The needlestick injury information, specifically, was provided by 32 MRFs. It was specific to incidents in 2016.

How common are needles in recyclables?

Almost all facility operators reported seeing needles or syringes at least once a year, and more than half of them reported seeing them daily or a few times a week. The two more common places for them to be seen and reported were the plastics line and with the fines/residue. Nearly three-quarters of the facility operators said their staff pull them off the line as contamination.

“Given the frequency with which needles are observed on sort lines, and the common practice of removing needles as contamination, it is unsurprising that 97 percent of MRFs indicated [needlestick injuries] were a ‘very important’ or ‘important’ concern relative to other incidences at their facility,” according to the report.

The number of household needles in the garbage tripled from 2001 to 2011, according to the Coalition for Safe Community Needle Disposal. And they may become more common in garbage and recycling bins in the future.

“There are concerns that [needlestick injuries] will increase in the coming years due to factors such as an aging population, home management of increasingly prevalent medical conditions (e.g. diabetes, migraine), confusion surrounding proper disposal, and lack of access to take-back programs,” the document notes.

How many people were hurt?

In all, facilities reported a total of 57 needlestick injuries in 2016, according to the report. In a survey, 56 percent of MRF operators said one or more workers had been poked in the hands with needles in 2016. Not surprisingly, picking line workers accounted for nearly all incidents, with a much smaller number of maintenance workers reporting injuries.

The researchers then extrapolated the numbers to come up with a rough estimate of how many MRF workers are injured by needles across the U.S. each year: between 781 and 1,484.

The report noted the actual number of injuries is probably higher than the study’s estimates. That’s because other research show most needlestick injuries are never reported to management.

How much does this cost facilities?

After an employee is poked with a needle, costs are incurred for initial testing and treatment, pharmaceuticals to prevent virus transmission, and follow-up testing for viruses and drug side effects.

The available data shows a wide range of direct treatment costs per needlestick incident. The median in the literature was $173 per injury, but the average was three times that dollar amount. One reported cost was as high as $1,516.

And those dollar figures don’t include other costs related to treatment of any infections that are contracted, employee turnover and lost productivity, damage to equipment or revenue loss associated with downtime, according to the report.

One piece of good news for facility productivity is most needlestick injuries don’t translate to days away from work. Of the 57 injuries, only four resulted in the employee taking one or more days away from work. That comes out to a nationwide estimate of 0.18 days away per 10,000 FTE because of needle injuries.

How can injuries be reduced?

They also touched on how needles with retractable and self-blunting designs can help prevent injuries, as can the use of needle destruction devices.

In addition to having workers wear gloves and other personal protective equipment, most MRFs reported in the survey that they’re taking other steps to reduce injuries. They’ve established protocols for needles seen on the line (“stop, call, wait” procedures), increased staff safety training and education, changed operations (added pre-sorting inspections or equipment, such as a bag breaker), reinforced to employees the importance of reporting injuries, and collaborated with outside groups to provide disposal options for sharps.