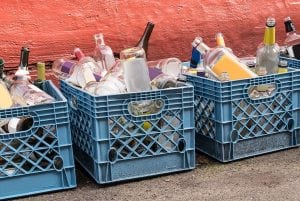 Nine percent of MRF operators say glass is accepted in their recycling program but they landfill it with garbage anyway. On the other hand, 43 percent ship their glass to bottle markets.

Those were just a couple of takeaways from a recent survey released by the Glass Recycling Coalition (GRC). Conducted this spring, the online survey queried more than 300 public employees, glass industry professionals and MRF operators. It was the second year in a row the poll had been undertaken (year-over-year comparisons of attitudes were difficult to determine, however, because of a significant increase in respondents in 2018).

A report on the survey includes detailed results. Among the major findings, 93 percent of residents expect to be able to recycle glass, according to respondents.

Additionally, nearly 80 percent of respondents from each of the three groups said they believe the cost of collecting and processing recyclables should be shared among various members of the recycling chain, a substantial increase from sentiment expressed the previous year.

The survey results were announced Aug. 7, one week after the U.S. EPA released its estimate of the U.S. recycling and composting rate in 2015. The federal agency calculated the following glass-specific recycling rates: beer and soft drink bottles (41.9 percent), wine and liquor bottles (27.6 percent), and other bottles and jars (15.1 percent). Overall, the glass container recycling rate in 2015 was 33.2 percent, up from 32.5 percent the year before.

The GRC survey provided an interesting look at conditions at MRFs. In 2018, the number of public and private MRF operators participating in the survey increased to 82, up from 31 the year before.

The results showed that 27 percent of MRF respondents use specific glass cleaning equipment (some reported using multiple types of dedicated glass equipment). Most of them, 64 percent, use air knives, vacuums or blowers to remove paper and organics. Other equipment and facilities commonly used for glass are sizing screens to remove fines, magnets, and covered storage areas for glass. Much less common were eddy current separators on the glass line or polishing screens.

According to the report, 10 percent of MRF respondents said they had considered glass clean-up equipment but found it too costly, and another 7 percent said they would consider it.

End uses for glass were also explored. The most common use – reported by 43 percent of MRF representatives – was sending glass into the bottle market. After that was “other” (23 percent), alternative daily cover at landfills (21 percent), fiberglass (16 percent), road base (15 percent), any option other than landfilling with garbage (11 percent), sandblast medium (11 percent) and sending it to landfill with garbage even though glass is accepted in the recycling program (9 percent). Another 11 percent said glass isn’t accepted in their programs (percentages don’t add to 100 because facilities were allowed to choose multiple options).

The GRC has scheduled a webinar titled “How Commercial Glass Recycling Programs Are Thriving” on Aug. 16. Survey results will be discussed during the webinar.