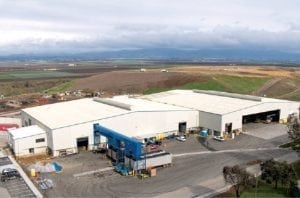 Monterey Bay is known for its whales, dolphins, seals and other sea life. Accordingly, the Monterey Bay Aquarium is famous for its living kelp forest and early success in Great White Shark care.

But a nearby materials recovery facility has been preoccupied with a very different type of creature: owls. When deconstructing the old MRF to make way for the new one, crews discovered barn owls nesting inside the building. Instead of evicting them, the Monterey Regional Waste Management District worked with local high schools to build 10 owl boxes to put in nearby.

“The boxes were installed in late February 2018 and by April we discovered several nesting owl pairs had taken up residence,” said Tim Brownell, operations manager for the district. “The barn owls are voracious consumers of rodents and now provide the MRF with a natural method of pest control.”

Of course, owls aren’t the only noteworthy feature of the recently opened facility.

The $24 million MRF sports one sorting line to handle single-stream recyclables and mixed waste, and a second line to tackle construction and demolition debris. The equipment sits within a 120,000-square-foot building. The site includes an additional four acres of paved areas for vehicles, C&D unloading and material movement.

Single-stream residential material comes in from about 100,000 households in the region, and the MRF also receives single-stream recyclables from businesses.

In May, 71 percent of single-stream recyclables processed by the facility were fiber and 29 percent were commingled containers. That month, the recyclables residue rate was 15 percent.

The residue rate has been largely impacted by China’s National Sword initiatives, Brownell said. Various plastic and fiber materials that had been accepted in the Monterey County area are no longer able to be marketed. As a result, they’re now counted as residual. Affected materials include film, plastic-coated fibers, PVC, PS and No. 7 other plastics.

The facility has a couple of features that make it unique. First, 100 percent of its power comes from an adjacent landfill gas-to-energy plant. Second, it also salvages reusable goods so they can be sold at the Last Chance Mercantile, located on-site.

“The district has staff on the tipping floor and as reusable goods are spotted in incoming loads those items are removed and loaded on trailers to be delivered to the Last Chance Mercantile,” Brownell said. “The store has a huge following and great reputation in the local community.”