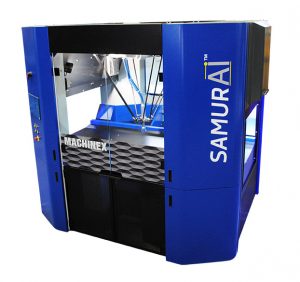 According to Machinex, the robot can perform 70 picks per minute, doubling the average human ability. In a press release, the manufacturer said two of the robots will be installed in recycling facilities in the U.S. and Canada during the coming weeks.

“We developed this technology further to always answer the evolution of the market needs,” company CEO Pierre Pare said in the release.

The Machinex SamurAI product is the latest offering in a growing trend to integrate AI-based robotics in materials recycling facilities (MRFs) nationwide. The technology development is being fueled by increasingly powerful computing capabilities and a a desire among MRF operators to have more stability on their sort lines amid tight labor markets.

The SamurAI uses a camera, artificial intelligence technology and a robotic pick unit, allowing it pull targeted items off a belt containing a mix of materials as well perform quality control once a certain commodity has been separated, according to the company.

The robotic unit has four articulations, or joints, allowing a range of flexibility. SamurAI provides 95 percent precision in its picks, according to the company.

The SamurAI system is designed for use with conveyors up to 48 inches wide. It is 8-by-10-by-8.5 feet in size, and has a modular design to allow use with other robotic systems on the sort line, according to Machinex. For example, it can be lengthened along the sort line to allow for two SamurAI robots in a row.

Besides its speed, the robot is capable of adapting to a shifting material stream. According to the company, SamurAI is “continually improving and learning from operating experience to assure maximum recognition efficiency.”

Machinex is working with AMP Robotics to produce SamurAI. AMP, a Denver-based technology startup, previously worked on the AMP Cortex, a carton-sorting robotic system that’s been operating in a Minneapolis-area MRF since August. Machinex will provide the robotic hardware for the system, using technology provided by AMP.

The SamurAI sorting capacity joins other recent robotic systems, including the Max-AI robot, which uses suction to lift up to 65 items a minute off the belt.

SamurAI debuted this week at Waste Expo 2018 in Las Vegas.