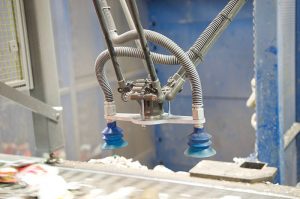 An industry-backed pilot project is taking the next step to develop artificial intelligence on single-stream sort lines.

The Carton Council announced it recently deployed a system from technology startup AMP Robotics at a materials recovery facility (MRF) operated by independent waste and recycling company Dem-Con Companies in Shakopee, Minn., roughly 20 miles outside of Minneapolis. The robotics began operating at Dem-Con on Aug. 21.

For most of this year, the Carton Council and AMP had been testing the system, called the AMP Cortex, at a Denver-area MRF run by Alpine Waste & Recycling. According to project leaders, the AMP robot will remain at the Alpine site, where facility staff and AMP will continue to experiment with the technology on different materials.

The Carton Council, which is backed by five carton manufacturing companies, provided grants to fund installation of the robotic equipment at the Alpine and Dem-Con facilities. Carton Council representatives did not disclose details on the amount of those funding efforts.

“The work we did with Alpine was exciting,” said Derric Brown, who is vice president of sustainability at the Carton Council and director of sustainability at carton maker Evergreen Packaging. “The next step is to see the technology work at another facility. We’re pretty confident in what we’ve seen.”

The technology used in the AMP system, as well as in recently unveiled product offerings from equipment companies Bulk Handling Systems (BHS) and ZenRobotics, leverages a type of innovation called “machine learning” that utilizes cameras and computer software to recognize the visual characteristics of materials on a recycling facility conveyor belt and then target certain items for separation.

Early optical sorting efforts decades ago tried to use cameras to guide mechanical sortation, but the latest wave of artificial intelligence systems can compute data much quicker and execute more picks per minute.

As such systems continue to develop, they could open new pathways in materials-stream data analysis for operators because the robots can store information on all items that pass below them on the belt, and the machines’ recognition capabilities would improve over time.

The use of artificial intelligence could also reduce MRF reliance on manual sorters, a staffing segment known for high turnover and injury rates.

At the Dem-Con site, the system will be placed at the beginning of the container line, which is located toward the end of the overall processing network. The robot will be programmed to isolate cartons from the mix of containers, the same setup in place during the pilot in Colorado.

“It’s a different conveyor belt and a different materials stream in a different municipality,” said Matanya Horowitz, AMP’s founder. “We wanted to test out slightly different conditions. If the results are good, it shows the robot would be ready for prime time soon.”

According to Bill Keegan, Dem-Con president, cartons currently make up just 0.1 percent of the Minnesota MRF’s incoming stream by weight. However, in recent months the company has begun pushing an education program to area residents and haulers to try to move more cartons into curbside recycling.

He noted that up until now, one person on the sort line has been focused on pulling out cartons, and what was missed would be handled by another sorter further down the belt. He said that means the robot will essentially be replacing 1.5 manual sorter slots.

“Those people will be put on other parts of the facility,” said Keegan. “In our area, the unemployment rate has been less than 3 percent, so it’s hard to get people regardless of wage. This will help; it will replace labor we haven’t been able to get.”

According to a press release from the Carton Council, once fully operational, the AMP Cortex will be able to pick up 60 cartons per minute, compared with the 40 per minute the average manual sorter can pick.