Growing group reconciles many funders and one mission 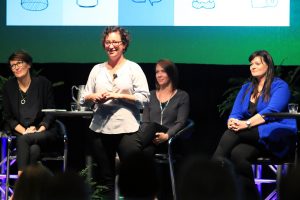 Keefe Harrison, CEO of The Recycling Partnership, at the 2016 Resource Recycling Conference.

The Recycling Partnership now has nearly 40 industry entities behind it. That raises an interesting question: How does one organization balance the needs of so many corporate backers?

When The Recycling Partnership launched four years ago, it had just a half-dozen funders, but that number now sits at 36, with Amazon, International Paper and Starbucks  joining the group last week.

The Recycling Partnership uses the funding provided by these different players to help improve access and infrastructure around U.S. curbside recycling.

Not surprisingly, however, those 36 backers represent a varied mix of needs and perspectives on materials use. Some are direct competitors: Coca-Cola and PepsiCo, for example. Others, such as International Paper and plastics giant Berry Global, have vested interests in promoting the use – and thus recovery of – different forms of packaging.

Keefe Harrison, The Recycling Partnership’s CEO, acknowledged that there’s an inherent challenge when many different types of companies put their dollars into a single initiative. “I often get asked by other nonprofit groups, ‘How do you manage all those corporate limbs?'” she noted in an interview with Resource Recycling.

Harrison said part of the answer comes in the fact that The Recycling Partnership has very clearly articulated its mission – improving recycling access in communities where it is lacking and bolstering infrastructure in places where it already exists. That means backers know the extent of their reach as soon as they come on board.

But Harrison added solid data from projects the group has implemented thus far help instill a feeling of trust among funders. The Recycling Partnership, which will be releasing its 2017 annual report in the coming weeks, says the organization’s work has led to carts and other tangible system components with a value of $29 million across more than 500 communities over the last four years.

“No one has made this much change in the space in this amount of time, so we can really make the case that we have a strong ROI,” Harrison said. “If you remain mission focused and have strong metrics, there’s nothing to push against.”

Harrison also made the point that she’s noticed a trend in the wider business world that when it comes to taking steps to improve the environment, companies are increasingly willing to put differences aside for the broader benefit.

One example she referenced was a recent memo from the CEO of investment firm Blackrock that implored corporate leaders to become more deeply involved in community and environmental issues.

“I definitely think that’s a shift,” said Harrison. “There’s a willingness among companies to link arms when it comes to solution building, even while at the same time they are fiercely competing for sales.”

Look for a full Q&A with Harrison about the evolution of The Recycling Partnership and the industry as a whole in the May print edition of Resource Recycling. Not a subscriber to the print edition? Start a complimentary trial subscription today.