MRF of the Month: Kent County Recycling and Education Center 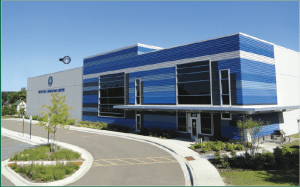 In some ways, the success of a recycling program depends on outreach to residents. In other ways, the key is sortation efficiency and technology.

Officials in Kent County, Mich. are making strides on both fronts.

“We are developing an outreach campaign to help increase the regional recycling rate, improve the quality of materials we are receiving and to further showcase the economic importance of recycling to our region and beyond,” said Nic VanderVinne, resource recovery and recycling manager at the Kent County Department of Public Works.

The effort comes shortly after a $1.5 million upgrade of the county’s materials recovery facility, the Kent County Recycling and Education Center. The project, which was completed last fall, brought in a new OCC screen and an optical sorter. The new CP screen is allowing the facility to sort OCC in larger volumes more efficiently, and the MSS optical sorter is targeting cartons.

The 56,000-square-foot MRF, located on Wealthy Street Southwest in Grand Rapids, got a little financial assistance to help with the optical sorter: The Carton Council in mid-2017 provided a grant to help buy the equipment, which allowed the program to begin accepting cartons.

The MRF, originally built by RRT and Hustler, spent $700,000 to add a Harris Centurion Baler.

All told, the equipment and staff handle about 18 to 20 tons per day. About 70 percent of the volume is fiber, with the remainder commingled containers. 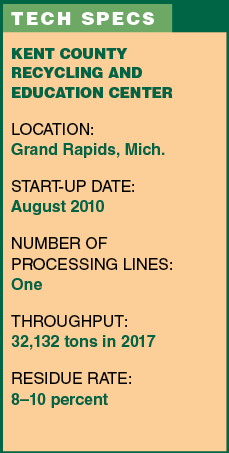 Single-stream material lands on the tip floor from residential curbsides in Kent County and nine surrounding counties, as well as via a handful of drop-off stations operated by the county and private haulers, VanderVinne said. In addition, the facility receives commercial OCC.

Outside of the MRF’s sorting operations, the facility provides educational opportunities for the public. The LEED-certified facility sports a 5,000-square-foot education center with an observation deck. From the platform, more than 5,000 visitors a year watch material separation take place.

“Museum-quality exhibits will be installed in the summer of 2018 to help explain the sorting process in our facility, explain how recyclables get from the curb into a new product and describe the importance of recycling to the economy,” VanderVinne said.

The biggest issue the facility is dealing with is declining values for hard-to-market plastics and mixed paper, issues programs across North America are facing after China’s began restricting recyclables imports in 2017.

Kent County Recycling and Education Center is a critical part of helping the county achieve its goal of reducing material headed to landfill by 20 percent by 2020 and 90 percent by 2030, VanderVinne said. At the moment, the county recycling rate is only 8 to 10 percent.

Another important step is maximizing the effectiveness of a waste-to-energy facility run by the county. And, by the end of this year, the Department of Public Works plans to complete a master plan for a Sustainable Business Park to be built on 200 acres originally set aside for landfill expansion. There, manufacturers would create new products from recycled materials.

The Kent County Recycling and Education Center employs 12 full-time county staff and 18 contract workers, who work the sorting line. They work on one 10-hour shift six days a week.