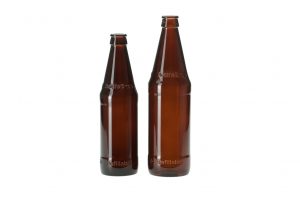 Oregon Beverage Recycling Cooperative (OBRC), the industry-managed stewardship group that runs the Beaver State’s container deposit program, is working with a number of stakeholders to expand what has until now been a fairly limited refillables sector.

Now, the same concept in use by Double Mountain is being offered to other craft brewers.

OBRC collaborated with Owens-Illinois (O-I), a major glass bottle manufacturer with a Portland production facility, to develop a unique container for the expanded reuse program. O-I receives major tonnages of recycled glass through OBRC for container manufacturing, and a high percentage of feedstock for the refillable bottles will come from this recycled glass stream.

OBRC says it hopes that by the end of June, offerings from a handful of breweries will be on store shelves in the new refillable bottles. Those containers will be different in both appearance and construction from traditional glass beer bottles. Double Mountain currently uses its own refillable glass bottle design. Moving forward, under the expanded OBRC program all brewers participating in the refillable initiative will be using a single design.

“We decided we needed to create an industry standard bottle,” said Jules Bailey, chief stewardship officer for OBRC, in an interview with Resource Recycling. “It’s a thicker, heavier bottle with a finish on it, so it can survive the rigors of being out in the marketplace and then getting washed.”

The bottle, which O-I began producing in February, comes in two sizes, one holding 12 fluid ounces and the other holding 16.9 fluid ounces. The bottles will not cost more for breweries than single-use glass products, Bailey said. He noted in some cases the refillables could actually be cheaper.

The bottles will also be visually identifiable as refillable containers. For the program to be successful, it has to recoup as many of the bottles as possible for refilling, rather than having them channeled into traditional glass recycling programs. Bailey said the goal is for consumers to immediately understand the bottle is meant to be refilled rather than crushed.

A diagram of a bottle washer system, courtesy of Oregon Beverage Recycling Cooperative.

Once collected by OBRC, bottles move into a washing phase.

In the short term, they’ll be shipped to Bayern Brewing, a Missoula, Mont.-based brewery with an established bottle wash operation. Bayern, which brought in 700,000 longneck craft beer bottles for refilling in 2016, will wash the bottles and ship them back to OBRC. The stewardship group will move them to partner breweries for refilling.

Bayern will handle the washing initially, but OBRC has longer-term local plans to create a more efficient, localized structure. The stewardship group is in the permitting phase for a bottle wash facility in Clackamas County, Ore., just outside Portland.

Bailey said it will likely take a year and a half to complete the facility, which is slated to be an equipment-heavy operation. Bailey said once the plant is operational, bottles entering the system will receive an initial spray to loosen adhesive labels before moving into a washing machine line from Germany that will be capable of handling 15,000 bottles per hour.

Among other attributes, the machinery features an electronic sensor that uses X-ray equipment to image each bottle, detecting flaws in the glass, as well as mold and other contaminants, Bailey said. That step will reject any bottles that are chipped or contaminated.

Before washing, of course, OBRC will need to ensure bottles are collected. With the current Double Mountain bottles, when consumers put them into reverse vending machines at the OBRC drop-off centers, the machine ejects the bottle back to the consumer with instructions to bring it to an on-site OBRC attendant instead.

But as the program expands, so too will the return options. Besides the reverse vending machine method, consumers can return the bottles using OBRC’s “green bag” convenience program, where plastic bags are filled with containers and dropped off for OBRC attendants to count. OBRC is also planning to offer cardboard boxes that consumers can fill with the refillable bottles and return. Since that method makes it easier for attendants to sort and count the bottles, it will come with a 20 percent bonus on the redeemed deposit, Bailey explained.

Still working to bring brewers on board

OBRC has not yet signed contracts with breweries to use the new O-I bottle, but it has had conversations with a number of breweries that are excited about the concept, Bailey said. He noted some of the smaller local and regional breweries are very interested, but larger craft brewers from Oregon such as Widmer and Deschutes have also expressed interest.

For the larger players that sell significant quantities outside Oregon (and thus would be moving bottles outside the refillable collection jurisdiction), it may be more feasible to incorporate the refillables into smaller batches, such as seasonal or regional beers, Bailey explained.

Bailey also said the ability to launch a statewide refillable program is tied to the fact Oregon has already a unique bottle deposit system in place already, one in which the stewardship group handles all stages of the recycling process, from collection to sale of recycled product to an end user.

“There really isn’t another system that has statewide pickup, collection and processing under one roof,” he said. “We’re just piggybacking on the existing infrastructure.”