East Coast PRF on the road to reopening 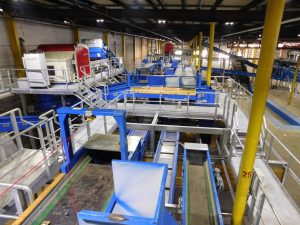 Wheels are in motion to resume operations at an idled plastics recycling facility outside Baltimore. But if it does start up again, it will do so without one of its original partners.

The Dundalk, Md. QRS facility, which launched as a joint venture between QRS Recycling and Canusa Hershman Recycling, suspended operations last summer. As a plastics recovery facility (PRF), the operation had been separating materials out of mixed-plastics bales for sale to downstream outlets.

At the time, the companies said the downtime would “enable an optimization of the equipment” at the facility, and they noted market challenges were impacting operations across the post-consumer resin industry.

Efforts have been progressing over the past six months to bring it back on-line, sources told Plastics Recycling Update. But in the meantime, QRS Recycling exited the joint venture as of November 2017, company QRS CEO Greg Janson confirmed, and the PRF is now owned entirely by Canusa Hershman Recycling.

“We are no longer involved in the QRS of Maryland facility,” Janson stated.

But as QRS exits, another player has expressed interest in acquiring the facility.

The Closed Loop Fund originally provided financial backing to get the PRF operational. Bridget Croke, external affairs director for the Closed Loop Fund, told Plastics Recycling Update the facility has received a letter of intent from “a major company in the industry” and hopes to close on a transaction in the coming months. It would be an acquisition by a new operator, she said.

Few specifics are public at this point, as the parties are operating under a confidentiality agreement, said Jonathan Sloan, president of Canusa Hershman.

“We’ve been working diligently to find various parties who are interested in restarting the facility,” he said.

“We’re hopeful that, in the near future, we have consummated a transaction,” Sloan said, noting the relevant stakeholders would share more details when appropriate.

As for the facility’s moniker, given QRS’s departure, Sloan noted that will likely change as well.

“I would suspect any new owner would re-brand the facility to their name,” he said.

Pioneering in its field

QRS and Canusa Hershman opened the 128,000-square-foot Baltimore-area PRF in November 2015, focusing on separating materials out of Nos. 3-7 bales. The Maryland location was sited to serve regional materials recovery facilities (MRFs) and reclaimers, according to QRS. It had a capacity of nearly 55,000 tons per year.

Under the original partnership, Canusa Hershman’s role was to acquire feedstock for the facility, and QRS was responsible for operating it. Both companies had an equity position in the venture.

The QRS operation has been viewed as a pioneer in the push for domestic processing of mixed-plastic bales, which have traditionally been shipped overseas.

At the Plastics Recycling Conference in Nashville, Tenn. last month, Janson recounted the factors that led to the facility’s development. QRS initially started a PRF to serve the Louisville, Ky. area. Based on the results seen at that facility, QRS expanded with another similar operation in Atlanta.

Oil was trading at $105 per barrel, and PET was priced between 20 and 30 cents per pound. QRS had a “major relationship with some brands on PET supply,” Janson said. With all the positive factors, the company quickly expanded with another location in the Baltimore area, in partnership with Canusa Hershman.

Then, Janson said, oil went to $28 a barrel and the PET market collapsed. The mixed No. 3-7s faced substantial difficulty trying to survive those market conditions, and QRS “ended up having to close our 3-7 PRFs,” Janson said.

Despite the downturn, Janson expressed optimism about the lessons learned through the PRF challenges. QRS is more focused on securing buyers for the material it sorts and sells.

“When you go through a situation like that, it’s obviously going to influence how you look at things,” Janson said. “We’re just a more realistic company, and I think we understand now more than ever how important it is to stimulate demand, so we can have movement of these materials in all market conditions.

Shortly after the PRF idled last summer, the Closed Loop Fund discussed the situation in an interview with Resource Recycling. Rob Kaplan, managing director of the fund, said the organization “knew there were a lot of challenges” for a facility like the Dundalk plant.

“Finding the right opportunity to capitalize the facility and put a business model together that will work in the long term is for the good of the model and is what we want to see,” Kaplan said at the time.