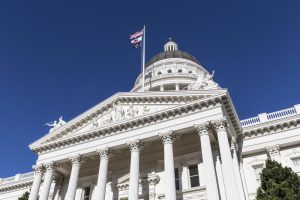 A number of weighty topics are being discussed in statehouses this year, including extended producer responsibility for packaging, gutting of recycling funds and recycled-content mandates.

The following are just a few of the higher-profile bills related to materials recovery that are working their way through three state legislatures:

California: The Golden State is advancing a bill calling for mandates on the use of recycled content in beverage containers. The legislation, Senate Bill 168, requires the California Department of Resources Recycling and Recovery (CalRecycle) by 2023 to establish minimum recycled-content standards for metal, glass or plastic containers (state law already requires glass bottles contain 35 percent recycled content). The bill also requires that CalRecycle by 2020 provide a report to lawmakers about the potential to implement an extended producer responsibility (EPR) program to replace the current container redemption program. The state Senate on Jan. 29 voted 28-6 to pass the bill, which is now awaiting action in the Assembly.

Connecticut: A workgroup convened by the Senate Environment Committee has been meeting for more than a year to consider policies, including EPR, that would reduce packaging waste and boost diversion. The group includes industry representatives, environmental advocates, MRF operators, government regulators and more. It most recently met in December and discussed what should be included in its final recommendations to state lawmakers. EPR, which is on the table for packaging and printed paper, was discussed at length. The group is working to finalize its recommendations and could present them to lawmakers during the current legislative session.

Nebraska: The Nebraska Recycling Council (NRC) is sounding the alarm on a bill, LB945, that would divert money out of state litter and recycling grant funds. The legislation would transfer $700,000 out of the Litter Reduction and Recycling Grant Fund and $900,000 out of the Waste Reduction and Recycling Grant Fund. “These are the same amounts transferred in July 2017 that resulted in greatly reduced funding for 2018 Litter Grant recipients, like NRC and Keep Nebraska Beautiful affiliates, and that will adversely affect 2018-19 Waste Reduction and Recycling Grants due Feb. 1,” according to the group. A hearing on the bill was held by the unicameral legislature’s Appropriations Committee on Jan. 22. It was first introduced by the senator speaker at the request of the governor.