In October of this year, Washington, D.C. was the focus of a major campaign, but this one had little to do with national politics.

The effort, called Zero Waste DC, was instead geared toward pushing forward residential recycling in the nation’s capital. And a major component was expansion of the types of foodservice packaging the municipality accepted curbside. Among the list of newly accepted materials are pizza boxes, to-go containers, plastic deli and bakery trays, and more.

For residents, the shift may have seemed straightforward, but the work behind the scenes involved many partners and years of material and market analysis. Much of that coordination came through the Foodservice Packaging Institute (FPI), an industry association that has a goal of increasing the recovery of cups and other takeout containers.

“We were thrilled to provide technical and financial support to D.C. as they added foodservice packaging to their curbside program,” said Lynn Dyer, president of FPI. “Our approach relies on strong end markets partnering with recycling processors and communities educating their residents to ensure these materials are recycled properly.”

Washington is, in fact, one of several U.S. cities with recently rolled out foodservice recycling efforts that are tied to wider industry conversation and coordination. Chattanooga, Tenn. and Louiville, Ky. are others.

The revamped programs in these three cities represent the culmination of a prolonged industry effort to successfully divert more material in a manner that benefits all stakeholders involved.

Since 2012, FPI has been working to overcome real and perceived barriers to recover foodservice packaging. Designed to operate collaboratively using data-driven and market-based approaches, the organization looked at factors including material, product type and point of disposal to identify solutions and establish a practical and scalable recovery approach.

This led the group to target paper and plastic cups, containers, boxes, and paper bags. These items are all comparable in size, shape and material to other commonly recycled items. FPI has determined nearly half of all used foodservice packaging is discarded in the home, so the organization’s current work focuses on residential collection. And since a variety of common materials are used in foodservice packaging, FPI has been working with numerous MRFs, end markets and associations to identify viable domestic outlets to handle foodservice packaging along with other commonly traded commodities.

Often, cities and processors hesitate to accept foodservice packaging for recycling due to concerns about food residue. To address this concern, two studies were conducted in the last five years to learn whether material such as take-out containers or pizza boxes were more contaminated than other food-contact packaging (like peanut butter jars or yogurt containers) that has traditionally been accepted at single-stream MRFs.

DSM Environmental Services, Inc. conducted the studies in Boston (2013) and Delaware (2014). Randomly selected samples of residential curbside recyclables were collected in different areas of the study locations. Corrugated, mixed paper, plastic tubs and lids, aluminum cans and foils/pans were sorted into two categories: foodservice packaging or other packaging in contact with food (examples include jars, tubs, cans and boxes from prepackaged grocery items). Neither the Boston nor the Delaware study found an appreciable difference between food residue levels in foodservice packaging and other food-contact packaging in this category. And, the majority of both the food-contact packaging and foodservice packaging was ranked as “acceptable” at most MRFs, based on discussions with one of the region’s largest MRF operators.

Those results notwithstanding, FPI recognized that quality and contamination are widespread industry challenges, especially in commingled recycling where “wishcycling” is common. Adding new materials to recycling programs provided an opportunity to address resident education through dynamic ongoing outreach. FPI began to research best practices in resident messaging to improve the quality of incoming recyclables.

In 2016, a survey of 1,000 U.S. adults was conducted to determine where residents get their recycling information, what terminology is most understood and which instruction language most clearly conveys the need to properly sort and prepare foodservice packaging for recycling. Among the findings, FPI learned that while the instructions “clean and empty” should ideally be used for collecting recyclables, the term “empty” by itself is more effective than “clean” by itself in this context.

To maximize the impacts of the survey, FPI published the findings and applied them in developing a kit of model resident education materials and resources for community program staff. The comprehensive kit includes recommended language and graphics for foodservice packaging in outreach material. It is available to communities that are currently taking or are considering adding foodservice packaging items to their residential recycling programs.

Stakeholders have also been encouraged by the fact that some communities have demonstrated successful collection of these materials for many years. Torrance, Calif., for example, in 1992 began a citywide commingled curbside program that included foodservice packaging items among an extensive list of recyclables. In its educational fliers and on its website, Torrance is inclusive and specific about the foodservice packaging items that the program accepts, including sandwich and fry boxes, pizza boxes, clean paper plates and cups, clean aluminum foil and trays, and rigid plastic cups and containers.

The city’s recycling coordinator keeps in regular contact with MRF representatives and drivers of residential collection vehicles to focus public communication on common contamination. Both the MRF currently processing the city’s recyclables as well as its former processor have touted the cleanliness of Torrance’s commingled recyclables and attributed it to the city’s robust outreach program.

Bringing cities on board 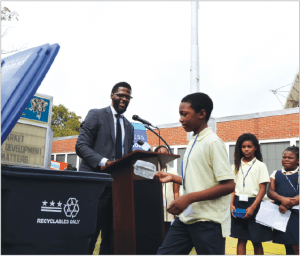 Once it was determined that there was potential for growth in the collection of foodservice packaging, FPI launched a community partnership program to help select municipalities move forward. Partner communities are chosen following a robust screening and due diligence process, during which FPI conducts outreach to relevant MRFs, haulers, end markets and communities. This ensures that partner communities have the resources in place throughout the chain to successfully recycle foodservice packaging. Most potential community partners rely on stable domestic markets for sale of recyclables.

Throughout the collaborative process of adding foodservice packaging to a recycling program, FPI lends technical assistance with markets, operations and communications planning. Partner communities work with FPI to develop a strong strategic communications campaign to complement the programs’ other education and outreach. The campaign materials are consistent with the learnings of the resident messaging study mentioned above, combining best practices in terminology, instructions, graphics and layout with an approach tailored to the needs of each community.

The program’s first community partnership launched this fall in Tennessee after about a year of planning. Chattanooga partnered with a local WestRock recycling facility to incorporate paper and plastic cups, containers, pizza and sandwich boxes, and paper bags. Before rolling out the changes, a residue audit was performed to gather baseline data. 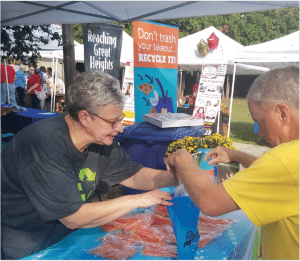 Chattanooga has used tabling events to get the word out to residents about expanded acceptance of materials in its municipal program.

FPI chose this region of the country in part because the WestRock MRF in Chattanooga has viable end markets and processing capability to handle the new items. Leaders from WestRock, one of the country’s largest paper producers, made it clear they saw targeted program expansion as a benefit, not a burden.

“We use recycled fiber as a raw material for our paper mills, and foodservice packaging is good quality fiber,” said DJ Vandeusen, senior vice president of recycling at WestRock. “We are also excited about strengthening partnerships in our communities and focusing on increasing recovery from residents.”

With help from FPI, Chattanooga launched an outreach campaign on Sept. 22, informing residents of the new acceptable materials and how to properly divert them. The campaign included website updates, an advertising campaign and eye-catching educational fliers distributed by volunteers and staff during a tabling event at the Chattanooga Zoo. This event afforded the opportunity to speak to residents face-to-face about the new recycling additions.

“We had been researching how to offer more recycling options for our residents,” said Justin Holland, administrator of Chattanooga’s Department of Public Works. “With this partnership, our community has the opportunity to save resources and avoid sending valuable materials to the landfill through an expanded recycling program right at residents’ doorstep.”

In the first month of Chattanooga’s campaign, the recycling section of the city’s website received 2,342 more unique visitors than the same period a year ago, a 116 percent increase. Facebook ads, meanwhile, reached nearly 53,000 Chattanoogan users, and the city’s recycling page gained 124 new likes, an 814 percent increase over the same month in 2016.

Tailored to municipalities and markets

Like Chatanooga, Washington and Louisville have put a focus on MRF partnerships and outreach in their own foodservice packaging expansions. 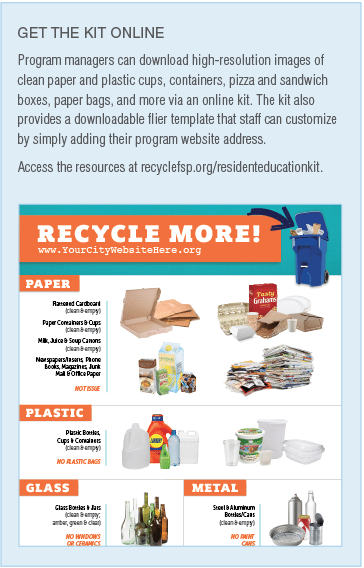 Washington’s updated list of recyclables, which launched alongside the Zero Waste DC campaign on Oct. 5, includes paper and plastic plates, cups, lids and to-go containers; plastic produce, deli/bakery containers and trays; and pizza boxes. These complement the items already accepted in the curbside program: a variety of paper, plastic, metal and glass products as well as cartons. The program expanded after research was conducted at MRFs in the area.

“Education is the key to this initiative,” Mayor Muriel Bowser said, noting the focus city staffers are putting on the zerowaste.dc.gov website. “We all must work together to recycle and recover more.”

Louisville, meanwhile, announced it had added many types of foodservice packaging to its residential recycling via a press conference Oct. 18. At the event, Louisville Mayor Greg Fischer was joined by representatives from FPI and the city’s recycling processor, QRS. A group of school children shared their thoughts on why recycling is important and joined the mayor in an impromptu recycling chant: “Don’t trash your takeout, recycle it!”

Louisville has a goal of diverting 90 percent of recyclable material from the landfill stream by the year 2042. The mayor said the foodservice packaging initiative was in line with that objective.

“This is another step in the long-term plan to create an even cleaner and more sustainable future for our city,” Fischer said during the press conference.

As with those in D.C. and Chattanooga, Louisville’s program includes a strong communications component to ensure that residents only recycle empty cups and takeout containers. After working with the QRS MRF to determine that no significant operational changes would be needed, FPI collaborated with Louisville recycling and communications staff to identify their communications goals and to create an effective campaign.

Louisville’s recycling coordinator reinvigorated the city’s recycling webpage with simple images of acceptable recyclables. A new residential outreach flier and banner mimicked the look of the digital advertising campaign, creating a consistent and clear recycling message. The digital campaign aimed to draw traffic to the city’s recycling page and Facebook page (campaign statistics were not available at press time).

In the current market environment, it is a challenging time to add materials to recycling programs. However, FPI is encouraged by the interest and engagement shown by these communities and markets, and the group continues to evaluate communities interested in partnerships. Rather than advocating a one-size-fits-all approach, the organization engages with a program’s end markets and processors to see which materials can be included. For programs where MRFs and end markets are well-aligned to accept foodservice packaging, FPI is eager to provide technical and educational support to make the transition smooth – and to encourage high standards for residential compliance.

“If your community has a strong recycling program with viable end markets nearby, we want to hear from you.” said Dyer. “It’s a win all around – for communities and their residents as well as for local recyclers, mills and plastics reclaimers.”

RRS serves a consultant partner to the Foodservice Packaging Institute.