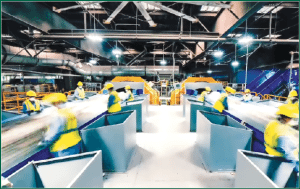 But it didn’t get that large overnight. Instead, expansions to the sprawling complex came incrementally over the past quarter-century. The latest upgrade doubled the capacity to recover recyclables from mixed waste collected at businesses and multi-family housing.

“Orange County has been at the forefront of sustainability practices for decades,” Heath Eddleblute, area president of Republic Services, stated in a press release. “This community was an early adopter of “all-in-one recycling” at home and work, which made recycling easier and enabled greater participation. Now, with the expanded commercial capabilities, we’re positioned to bring durability to local recycling initiatives, and help our customers achieve their long-term sustainability goals.”

Republic Services began operating at the site in 1992. In 1994, a commercial system was added, and an organics-processing facility was built in 2004.
In early 2012, upgrades to the single-stream lines were completed. Eugene, Ore.-based recycling equipment company Bulk Handling Systems boosted the facility’s capabilities from 20 tons per hour up to 50 tons per hour, adding automated sorting technologies. Shortly after, Resource Recycling featured the facility as a MRF of the Month.

The latest improvements were added in April 2016, when BHS and RRT Design and Construction installed a 100-tons-per-hour commercial and multi-family mixed-waste system. The new system replaces the commercial sorting line installed in 1994. And while the two mixed-waste lines are considered separate from the two single-stream residential lines, the mixed-waste segments feed containers into the optical sorters on the single-stream lines.

“When we designed the single-stream system, we built in capacity and design features to process recyclables from the mixed-waste system, particularly with our NRT optical line,” Steve Miller, CEO of BHS, stated in a press release. “Republic has embraced two processing philosophies in tandem to maximize recovery and help the community reach its diversion goals. They have executed on their vision, and it’s fulfilling to see it all come together with the completion of this phase.”

Republic has over 300 employees at the Anaheim Recycling Center. More than 80 of those workers handle quality-control duties.