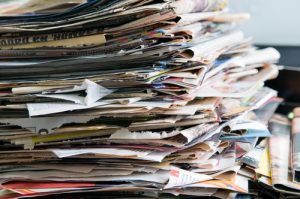 Optical sorter units helped clean up newsprint bales and boost OCC and old boxboard recovery in a region of Ontario. Those involved with the project have shared some important tips for others considering similar efforts.

The goal was to increase the recovery of OCC and old boxboard (OBB) from the newsprint stream and drive down the 30.1 percent contamination in ONP product.

It recently released its report on outcomes and lessons learned from the project.

“With the changing composition of the fiber stream and tighter specifications on the export market, producing an acceptable Sorted Residential Paper (56) grade utilizing a combination of OCC and ONP screens and manual labor will be difficult,” according to a project report. “Optical sorting technology provides the necessary tools for MRFs to produce this grade and open other marketing opportunities to supply newsprint to mills that produce moulded pulp products and fiber insulation domestically.”

At the same time, online shopping is driving demand for OBB/OCC and the market price will continue to reflect the shift. “Therefore, recovering as much OCC and OBB from the ONP stream will increase revenues at Ontario MRFs,” the report states.

Van Dyk was able to meet the technical and throughput requirements but not the ejection targets, according to the project report. The document attributes issues not to the optical sorters, which were accurately identifying materials, but to the high volumes and uneven spacing of material entering them.

“It is interesting to note that the optical units will eject virtually all the missed items if placed back on the accelerator conveyor,” the report states. “The reason why items are missed is due to the throughput level and material distribution. The detection capabilities of the Titech units are excellent.”

As a result of the challenges, Van Dyk reduced its optical sorting capacity for those units from 12 metric tons per hour to 8 metric tons per hour. In June 2015, Van Dyk and the Niagara Region signed an amended agreement that established new minimum targets of 70 percent OBB/OCC ejection and 55 percent plastic/polycoat carton ejection. Van Dyk has met those targets, the report stated. Additionally, as part of the deal, Van Dyk in September 2016 installed a new sorting line allowing quality control sorters to better remove contamination from the ejected stream to generate a cleaner OBB/OCC product.

The MRF is now generating a cleaner newsprint stream and greater volumes of OBB/OCC for sale. Specifically, contamination in the newsprint stream dropped from 30.1 percent to 11 percent. Additionally, the MRF is recovering and selling nearly 60 percent more OBB/OCC than before.

After all expenses and market adjustments, the MRF is experiencing a savings of about $549,159 Canadian dollars ($432,000) per year because of the FOSS. That provides for a total payback period of about 4.67 years; however, when CIF funding is applied to the capital and installation costs, the calculated payback period decreases to 2.8 years.

In addition to sharing the successes of the project, the authors provided tips for others considering similar projects. For example, they stressed that throughput and materials distribution are key considerations.

The Niagara MRF receives fiber collected in bags, a collection approach that leads to surges in material entering the sortation line. “Installation of a bag breaker would address the bag issue, reduce surging and allow sorters to focus more on film and container recovery in the pre-sort area,” the report states.

The system also includes a nine-foot-wide vibratory feeder, which is meant to spread out the material before depositing it on the nine-foot-wide belt leading to the optical sorters. But it is operating at capacity, and a larger or faster feeder is needed to more effectively disperse material, the report notes. Reducing the throughput to 8 to 10 metric tons per hour would also help ensure efficient material distribution across the belt.

With those changes, the Niagara Region MRF could boost ejection rates for OBB/OCC to 80-90 percent, instead of its current 70 percent, the authors concluded.