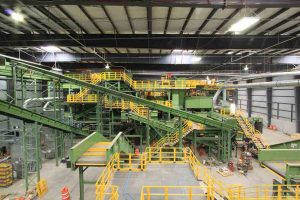 When you hear “mega MRF,” this is probably the facility you should think of: a 1,000-tons-per-day materials recovery facility in the Sunset Park section of New York City’s Brooklyn borough.

Opened in late 2013, the Sims Municipal Recycling Sunset Park MRF is billed as the largest facility of its kind in the U.S. It handles the majority of New York City’s metal, glass and plastics, as well as a portion of its fiber.

The $115 million facility sits on a pier on a bay near the mouth of the East River. The waterside location incorporates 850 feet of dock space, allowing for the use of barges to bring feedstock in and ship bulk commodities (glass and metals) out. It reduces an estimated 240,000 truck miles a year from city streets. The MRF also utilizes freight rail on the Brooklyn waterfront to export baled commodities.

The facility was built and is operated by Sims Municipal Recycling, a division of the Australian scrap metals giant Sims Metals Management. New York City spent about $60 million on the project and Sims added around $55 million.

Sims operates it under a 20-year contract (with the potential for two 10-year extensions) with the New York City Department of Sanitation (DSNY), which collects and delivers more than 24,000 tons per month of metal, glass and plastic to Sims. Under the contract, Sims sorts and sells all of the curbside program’s metal, glass and plastics and about 50 percent of the fiber. The city has a dual-stream collection system. 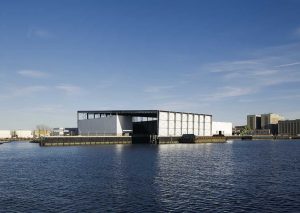 In April 2013, before the Sunset Park MRF opened, DSNY began instructing the more than 8 million residents of the city to begin throwing all rigid plastic packaging, including plastics coded Nos. 3-7, into their recycling bins (Sims had been sorting curbside materials at facilities in New Jersey and Queens before the Sunset Park MRF opened). The change meant increased volumes of items such as yogurt containers, clamshells and shampoo bottles heading to Sims, and the company says it found markets for the majority of added items.

In terms of equipment, the Sunset Park MRF utilizes Bollegraaf systems designed by Van Dyk Recycling Solutions. It features 16 Autosort 4 optical sorters from Tomra as well as balers from Harris, a slow-speed shredder from SSI Shredding Systems, ballistic separators from Stadler and magnets from Steinert US.

Material travels from the tipping area through the slow-speed shredder before it passes over Bulk Handling Systems disc screens, which remove glass. Glass then moves under a drum magnet before going into an air system to remove the light fraction. A trommel separates tin cans from larger metal objects, and an eddy current separator removes non-ferrous metals. Tin cans then travel under an air system to remove any plastic bags before they’re densified in a tin can baler. 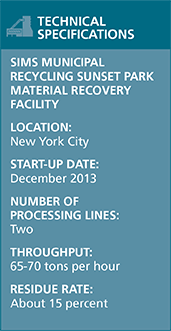 All of the material left on the belt goes to ballistic separators, which remove two-dimensional materials such as film and paper from three-dimensional containers such as plastic bottles, aluminum cans and cartons. The plastics then go through the optical sorters, which generate streams of colored HDPE, natural HDPE, PP, PET and cartons. Film and paper are also separated with dedicated optical sorters.

The 11-acre facility on city-owned property at the South Brooklyn Marine Terminal is billed as “green” because of its other features: a 600-kilowatt solar power installation on the roof, a 100-kilowatt wind turbine, use of recovered glass and crushed stone to raise the site by four feet, and more. The renewable power systems generate roughly 20 percent of the electricity consumed by the facility.
The MRF also includes a Recycling Education Center (REC) with classrooms, a theater, interactive exhibits and an area from which visitors can watch recycling operations. The REC hosts about 8,000 visitors a year.

The facility, which was designed by Selldorf Architects, won a New York City Excellence in Design Award.