MRF of the Moment: Upgraded facility opens in California 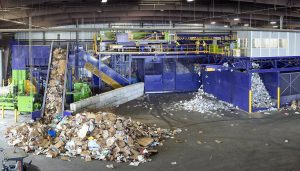 Three optical sorters and a variety of screening technologies form the upgraded backbone of a recently re-opened California MRF.

Mid Valley Disposal, a family-owned recycling and hauling company, started up the new sortation system in Fresno in April. The system, designed and manufactured by San Diego-based CP Group, can process up to 35 tons per hour of residential and commercial material.

“This system includes some of our latest recovery technologies, including glass processing and optical sorting technology,” Ashley Davis, director of sales and marketing at CP Group, stated in a press release. “We are honored to work with Mid Valley on this project and bring this modern facility to Fresno. It is an integral part of the recycling capabilities offered to the county.”

Jonathan Kalpakoff, vice president of Mid Valley Disposal, noted the increase in processing capacity and recovery of more materials will help boost local diversion rates. The MRF sorts recyclables from half of the City of Fresno and tens of thousands of households in neighboring counties.

The original system, capable of sorting 20 tons per hour, was installed in 2001. The bunkers, silos, baling system and tip floor pit were retained, but they were joined by several new sorting technologies. The line now includes three MSS optical sorters, including a Cirrus FiberMax that removes film and other contaminants from the fiber stream, and two Cirrus PlasticMax units separating HDPE, PET and mixed plastics.