This story originally appeared in the March 2017 issue of Resource Recycling. 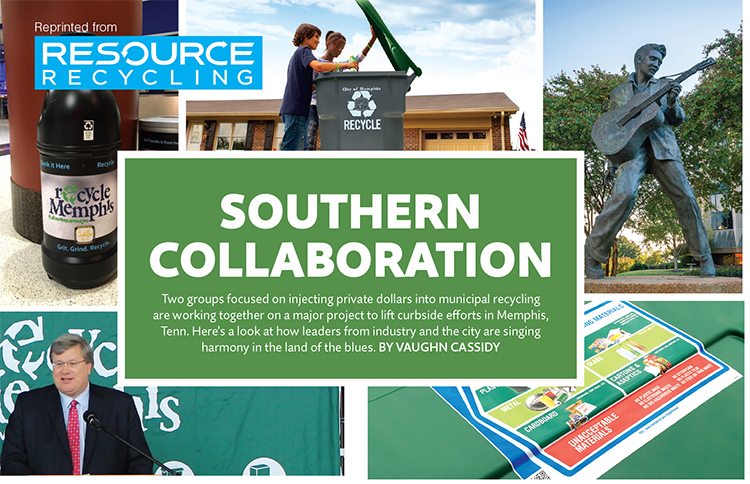 In 2014, two innovative approaches to funding the development of municipal recycling came on the scene almost simultaneously.

The Closed Loop Fund made waves when it was announced by Walmart and a handful of other huge brand owners. The idea was to have those business heavyweights contribute millions of dollars for low- and zero-interest loans that communities and companies could use for infrastructure development.

The Recycling Partnership, meanwhile, emerged as the evolution of a former nonprofit group called the Curbside Value Partnership. The new group’s stated mission: Use industry backing to bridge the gaps between the communities and the industries that benefit from recycling by creating campaigns that power local recycling programs.

In 2014, it was unclear to many in the recycling world how these two initiatives would coexist. Now, nearly three years after the two organizations were born, their complementary characteristics are being seen on the ground in Memphis, Tenn.

In one of the biggest cities in the Southeast, over $3 million in Closed Loop Fund financing, technical expertise from The Recycling Partnership, and dedication from city and state officials are all coming together to bring single-stream carts to residents and significantly lift tonnages of recyclable material diverted from the residential stream.

Leaders also note the unfolding process may be a sign of things to come in other metropolitan areas looking for a lift in materials recovery.

“Memphis is the first major municipality in the South we’ve invested in, and the largest city we’ve invested in so far,” said Bridget Croke, the external affairs coordinator for the Closed Loop Fund. “It’s a great place to create a case study for other similar municipalities to show that recycling should be a priority and makes economic sense.”

The path toward a transformation in curbside recycling in Memphis actually began more than five years ago. That’s when Joy Williams, recycling administrator with the City of Memphis, began an extended pilot study in a 36,000-household region of the eastern part of the city referred to as Area E.

Area E serves as an excellent socio-economic cross-section of Memphis, which has a total population of roughly 653,000 and is the largest city in Tennessee. “We knew if it worked across Area E, it would work city-wide,” said Williams. “It’s a success not only in capacity, availability and participation, but also in logistics.”

The pilot initiative helped demonstrate the power of curbside carts. Previously, Memphis residents relied on 5-gallon totes or bins to put separated recyclables out on the curb to be collected in a dual-stream format.

In Area E, residents were issued large carts by the city, and it became clear that the shift in receptacles would provide much more than just added capacity. For one thing, the carts opened the door to single-stream collection, a fact that streamlined the pickup process. “There is also the strength and durability of the carts, which allows them to be placed outside in all sorts of weather,” said Williams.

Another tremendous advantage is the uniformity of container size as it relates to equipment used to collect materials. The same type of truck can be used on alternate routes to collect regular trash or recycling. 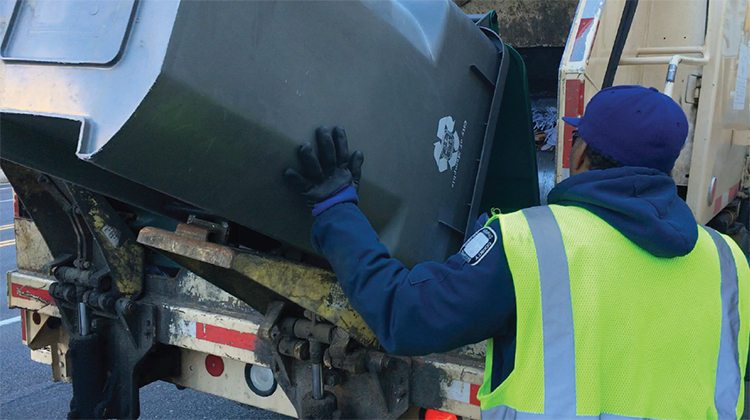 Memphis is shifting its residential recycling system from dual-stream to single-stream collection by moving 100,000 96-gallon carts out into the community. Already diverted tonnages have grown by 60 percent.

During the pilot study in Area E, collection increased from 200 tons monthly to nearly 600 tons, due in large part to automated and semi-automated pick-up. The efficiencies allowed hauler routes to increase from 400 to 600 stops per day to over 1,200.

The pilot project was undertaken by the city with hopes that data from the effort could be used to open the door to grants and other forms of outside funding to lift recycling. When the Closed Loop Fund opened up its application process for potential projects in the fall of 2014, ReCommunity, the primary recycling vendor for the greater Memphis area, encouraged the city to throw its hat in the ring – and include the pilot results.

The Closed Loop Fund liked what it saw. “That pilot study was what won us the attention and funding,” said Joy Williams.

Pouring a $3.25 million loan into Memphis at zero interest, the Closed Loop Fund has allowed the city to purchase 65,000 single-stream recycling carts with a 96-gallon capacity. The capacity is more than five times that of smaller bins residents have been using up until now.

Eventually, with additional funding from the Tennessee Department of Environment and Conservation, the city will be able to bring over 100,000 96-gallon carts to residents.

Carts, of course, are only part of the recycling equation. Education and public awareness, as well as logistics and capacity, are key components of the success of Recycle Memphis, the city’s public recycling program.

It’s in this realm that The Recycling Partnership has worked to push the program forward. The group has worked with Recycle Memphis to design and execute a tailored social marketing campaign to help Memphis increase desirable recycling behaviors.

“The City of Memphis is empowering all of its citizens to participate in the circular economy,” said Keefe Harrison, CEO of The Recycling Partnership. “We are proud to call them a partner.”

The initiative also includes an education grant from The Recycling Partnership and resources to kickstart the effort. 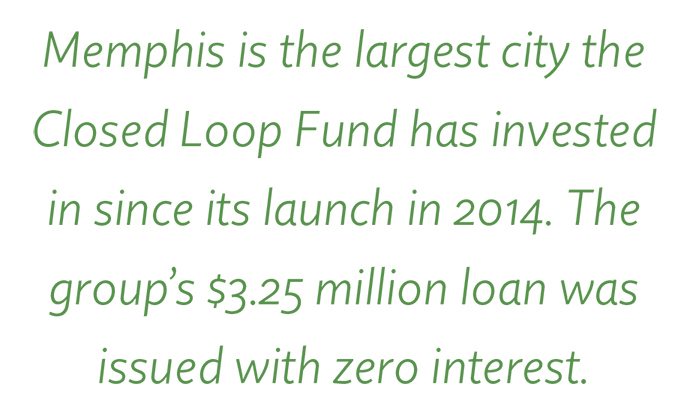 An assist from pro hoops team

The funding partners, the city and other stakeholders have also been finding unique ways to get the recycling transformation out in front of the community.

The Recycling Partnership, the Closed Loop Fund, and the City of Memphis announced the commitment to take recycling in Memphis to a greater capacity in early November last year. A press conference was held at FedEx Forum, home of the Memphis Grizzlies professional basketball team.

“As a city, we are strongly committed to recycling and that’s why we are powering forward to roll out over 100,000 additional 96-gallon carts,” Robert Knecht, director of the Memphis Public Works Division, said at the press conference. “Ideally this will increase our annual tonnage to over
45,000 tons.”

Jim Strickland, the city’s mayor, also voiced his support for program growth at the event. “This is a big benefit to us,” he said. “My wife and I both work full time, and we have two kids. Sometimes it’s hard to remember to recycle. These carts … will make a difference to busy people.”

On Dec. 3, a month after the formal unveiling of the initiative, 100 special arena recycling containers were placed around FedEx Forum. The receptacles helped grab the attention of fans who were at the building to see the Grizzlies play the Los Angeles Lakers.

“We know just setting them out is half the battle,” said John Walker, the executive vice president of business operations for the Grizzlies. “Education is key to this initiative, so we will be running public service announcements through all Grizzlies games and other events at FedEx Forum.”

The Grizzlies will also work with the local organizations Clean Memphis and Memphis City Beautiful to create recycling incentives for kids at schools across the city.

These different layers of education and advocacy in Memphis are crucial to the success of the program, according to Harrison of The Recycling Partnership. So is the staff of Recycle Memphis.

“Our members are companies from all across the country and globe who believe recycling is fundamental to a healthy environment and economy,” Harrison said. “We engage with communities like Memphis that have an active staff. Without the team on the ground it won’t go as far as it can.”

The anticipated impact of the program is that over 45,000 tons of recycled material will be collected annually within the city of Memphis. According to program leaders, the reduction in emissions from diverting that level of material from disposal would be equivalent to over 50,000 tons of greenhouse gases, or emissions from 110,000 homes.

Williams, the city’s recycling administrator, said she is grateful to the Closed Loop Fund, The Recycling Partnership, ReCommunity and other city partners. But she also gives credit to a now-retired city employee named Andy Ashford who began the entire recycling program in Memphis.

“Andy was a champion of recycling back when it wasn’t the standard thing to do,” Williams said. “He kept it going and we wouldn’t be this far along if it wasn’t for him.”

Currently, the impact of the shift is beginning to be felt throughout the city. The larger, more durable 96-gallon recycling carts have been delivered to about 50 percent of residences. Recycling tonnages have already increased by 60 percent.

“Recycling is nothing new for Memphis,” Mayor Strickland was quoted as saying in a recent Memphis Daily News article. “We’ve had an active program for many years, but we think we can do it better. With the new carts providing single-stream recycling, it’s now easier than ever.”

And if similar collaborations continue, recycling could soon be easier for households in other areas of the nation as well.

Vaughn Cassidy is an environmental specialist with the Tennessee Department of Environment and Conservation. He can be contacted at [email protected].