Piecing together a plan

This story originally appeared in the March 2017 issue of Resource Recycling. 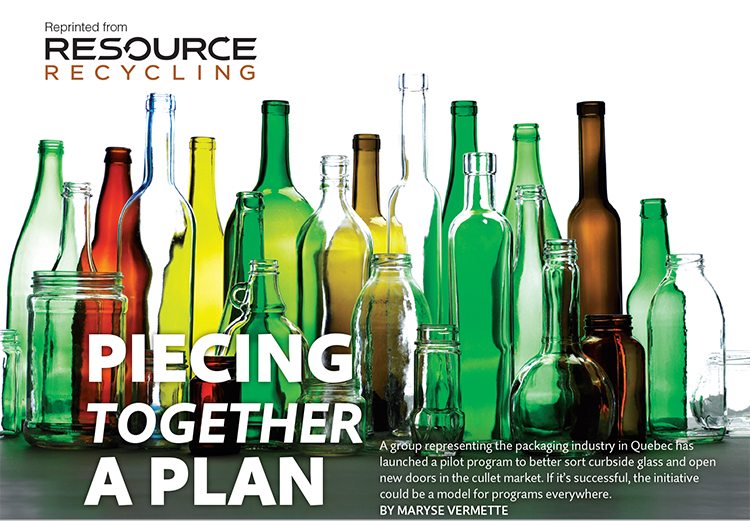 The challenges of glass recycling know few borders. Many U.S. jurisdictions have recently struggled with the economics surrounding curbside glass collection, and the Canadian province of Québec has encountered similar issues.

Despite a curbside recycling system that has been in place since the 1980s and high recovery rates overall, Québec has seen concerns when it comes to glass containers. For instance, the quality of most glass treated by materials recovery facilities (MRFs) does not meet the expectations of the processors that target traditional recycled glass markets, such as bottle production and sandblasting. Furthermore, the high cost of shipping glass long distances has limited development of new markets.

This complex situation led Éco Entreprises Québec (ÉEQ), the organization representing brand owners in the province’s extended producer responsibility framework, to try to find a glass solution. What follows is an overview of the recent investments made to improve the glass sortation process at Québec MRFs as well as a look at emerging market opportunities for glass that is sufficiently clean.

The steps taken in Québec could offer a roadmap for others in North America who are searching for ways to make glass a reliable revenue stream for recycling programs.

Though Québec’s glass struggles are similar to what’s been seen elsewhere, the context in the province is unique. Québec’s 8.3 million inhabitants are spread across a vast territory of 650,000 square miles (a land area just smaller than Alaska). In total, 99 percent of the population is currently served by single-stream curbside collection.

Also important is the fact that in Québec, the curbside recycling system is based on the principle of extended producer responsibility: Legislation stipulates that the businesses that market packaging recovered through single-stream collection must cover all the net costs of municipal curbside recycling services, including the costs associated with transport and sorting activities.

Within this system, ÉEQ is certified by the Québec government to represent brand owners. The organization collects the required sums from producers to be redistributed to the municipalities that oversee curbside recycling through a government corporation. Funded by industry, ÉEQ is a private nonprofit organization that collects nearly US $115 million annually.

Because they finance the curbside recycling service, packaging producers seek to make the system as efficient and effective as possible. To help on that front, ÉEQ hosted the Solutions That Matter forum in January 2015 to identify potential actions to address curbside recycling issues. At the event, issues pertaining to glass, its processing in MRFs and the use of recycled glass in a wide range of applications came out as top priorities.

To achieve optimization, stakeholders knew they had to upgrade Québec’s MRFs to increase the quality of processed glass and work in collaboration with processors, recyclers and other decision-makers to foster demand for glass collected through curbside recycling. Looking upstream, ÉEQ knew it was critical to ensure the backing of its contributing companies.

The incentive for brand owners to optimize the system is simple. Any revenues generated through a bolstered glass recycling system would reduce costs. The goal is a return on investment in the medium term, and businesses understand that funds are required today to get a higher price for materials tomorrow. 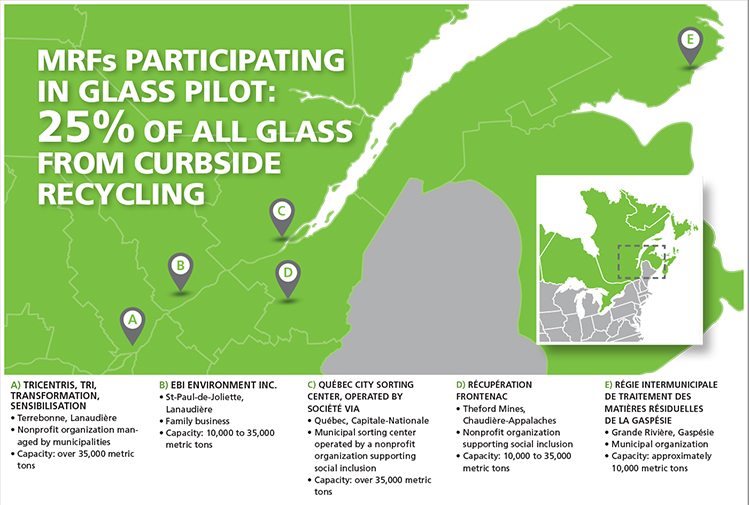 From this analysis arose ÉEQ’s Innovative Glass Works plan, which aims to find a concrete solution for 100 percent of the glass collected via curbside recycling in Québec. With a budget of US $5.1 million, entirely provided by businesses, the project’s first phase got underway last year and contained two components: the modernization of MRFs to produce better quality glass and the stimulation of new markets for glass in the system.

To accurately measure the success of the Innovative Glass Works plan, ÉEQ is working with RECYC-QUÉBEC, a government corporation, to assemble a follow-up committee. Tasked with selecting and closely monitoring a set of performance indicators to ensure coherence with the main objectives of the pilot projects, the committee will be a key factor in the plan’s success.

From the beginning of this effort, it’s been clear adequate processing of glass from single-stream collection requires innovative equipment that is adaptable to different types of sorting centers, since Québec’s 24 facilities are all designed differently.

ÉEQ was able to implement a solution through a three-way partnership with Krysteline Technologies, a British company that has developed an implosion technology for glass processing, and Machinex, a Québec equipment manufacturer that distributes and integrates Krysteline’s technology in North America.

ÉEQ chose Krysteline after researching different technologies used around the world. Krysteline’s system was observed handling glass efficiently in single-stream MRFs similar to those in Québec, and ÉEQ is covering the costs to install the equipment in five MRFs across the province for a pilot project that is currently underway.

The implosion technology at the heart of the process is key to improving the quality of material. Traditional sorting methods all begin with grinding and sifting, an approach that creates a tremendous amount of fine glass particles that are often difficult to separate from contaminants.

Instead of shattering the glass, implosion generates a shockwave that breaks up the pieces of glass and reduces the material to cullet, leaving labels and other contaminants intact. These contaminants can then be more easily removed and eliminated by aspiration and vibratory screening. (See the box below for additional operational upsides to the implosion technology.)

In addition, the system enables the production of two sizes of glass cullet. For instance, a MRF could produce larger glass fragments that a secondary glass processor could then sort again in order to produce glass cullet that is suitable for the remelt industry to manufacture bottles or mineral wool. Smaller, finer fragments could be transformed into new products, such as abrasive substances or glass filter media. The processor could dry, re-implode and calibrate the size of the glass cullet using a series of sieves before bagging tow create a finished product for the North American market.

At the five MRFs participating in the Québec pilot initiative, the implosion technology is used in combination with a magnet and suction system and sifting system to remove metal, fiber and plastic to produce high-quality, sharp-free glass cullet. Together, the five MRFs handle 25 percent of all curbside glass collected in the province.

As part of the second component of the Innovative Glass Works plan, our teams are currently working with Québec-based processors and recyclers to ensure that the glass deposited in the curbside bins is recycled into new products.

In March 2016, ÉEQ initiated a measure to support the commercialization of added-value outlets. Québec-based businesses were invited to apply for financial, technical and commercial support to bring to market products that integrate recycled glass collected through curbside recycling.

Nine organizations submitted a total of 15 applications. About 10 market studies were then conducted to increase knowledge of the markets in Québec and in neighboring regions. After going through a processor, glass produced through implosion may be used to manufacture high value-added products such as cement additives, foam glass, water filtration media, infill for synthetic turf, abrasives and mulch.

One notable finding was that manufacturers’ growing interest in glass from curbside recycling is driven by the material’s many properties as well as by the imminent shortage of processed sand. Several experts predict that demand for processed sand in the construction and hydrocarbon production industries will rise and considerably reduce the availability of this non-renewable resource. Like sand, glass is made from fused silica, which means glass in particle form could be used as a sand substitute in many applications.

Still, the true business potential of glass stems from its added value: its technical, economic and environmental performances. While some recycled end markets are already established and growing, other end-use applications are at the research and development phase and show promising potential.

Glass already finds a second life in the sandblasting industry. One of the key advantages here is the fact that glass does not contain any metal, unlike several more traditional options. Sandblasting is widely used to clean metal structures such as bridges, ships and refinery tanks. Finding non-metal ingredients for the process is important because sandblasting only works if it uses materials that are different from the material being treated. In addition, glass is an amorphous material that eliminates the silicosis risk for workers, which is a significant issue with sand in light of its crystal structure and free silica content.

Glass may also be used as ornamental mulch. Beyond its attractive hues, tumbled glass mulch has a technical edge: By preserving heat from the ground and preventing insects and crawling molluscs from devastating plants, it acts as a natural insecticide. It is also flameproof and protects ornamental installations from potential fires caused by discarded cigarettes and other sources. 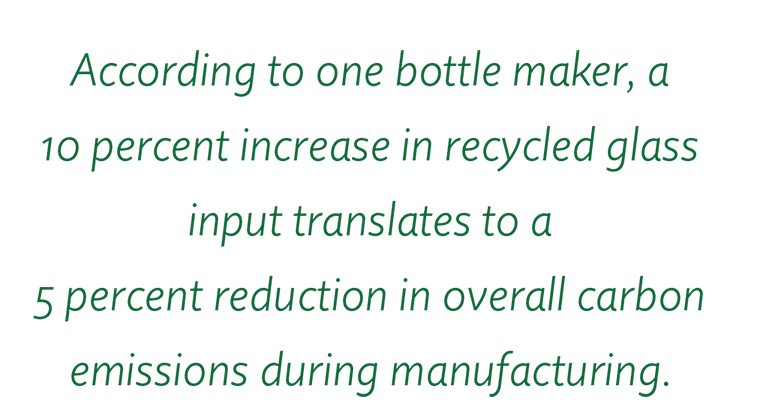 Glass may also help limit wear and tear on sidewalks. De-icing salt, which is often used in northern regions, is critical in winter but causes infrastructures to deteriorate more rapidly. Research at Québec’s Université de Sherbrooke has demonstrated that when glass powder is added to concrete formulas, it decreases the material’s permeability to chloride ions – a component found in salt – and increases its resistance to freeze/thaw cycles. When used as a cement additive, glass powder also improves the durability of sidewalk concrete.

Furthermore, recovered material can be used in cellular glass, a pumice-like product obtained by adding a blowing agent to glass powder and heating it to high temperatures. Because cellular glass is very resistant to the compression caused by passing vehicles, it is common in the road sector.

Finally, the moisture and fire resistance of glass allows the material to be used as insulation in the building and road sectors. Indeed, mineral wool from recovered glass has been available for several years. It is also possible to recycle glass to insulate conduits (used in infrastructures for water, electricity and gas) instead of relying on standard gravel.

Building an example of green economy

Though recovered glass is being looked at in more markets due to its technical and economic attributes, the environmental component remains crucial. With many public and private contracting authorities seeking to move forward on climate change plans and promote sustainability in general, glass diversion can play a quantifiable role. 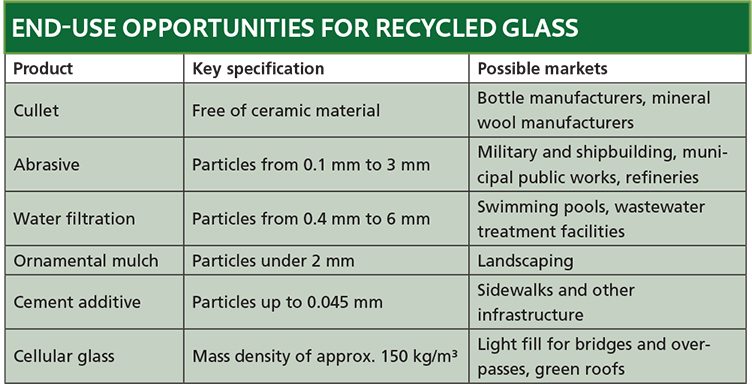 For example, the use of glass as a substitute in the creation of some products leads to major gains in terms of greenhouse gas emissions. According to glass bottle manufacturer Owens-Illinois, a 10 percent increase in recycled glass input translates to a 5 percent reduction in overall carbon emissions generated during manufacturing. The use of glass powder as a cement additive yields similar results.

Transport emissions are another factor that must be taken into account. Because the products that compete with glass for bottle production or used as a cement additive may originate from distant areas, the local availability of glass can mean a reduction in emissions generated through transportation.

The economic and environmental upsides of leveraging recycled glass in local economies underline the importance of finding sustainable solutions to cleanly capture glass from the curbside stream. It is now up to us in the industry to step up and build a shining example of how to develop a green economy.

ÉEQ’s Innovative Glass Works plan is the application of a market diversification strategy based on efficient materials processing. The initiative is still in its early stages, but it’s becoming clear the strategy may also be implemented in similar settings across North America.

If you are interested in this innovative approach, be sure to keep up on how the effort unfolds and reach out to ÉEQ for additional information and perspective.