Solutions for cleaning up glass at the MRF 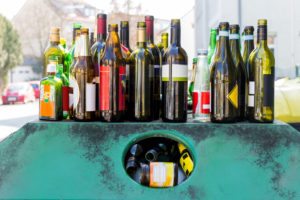 Resource Management Companies (RMC) wasn’t chomping at the bit to get into the glass beneficiation business. It was more or less forced to by the realities of glass collections and markets.

But then the Midwest operator of materials recovery facilities (MRFs) found that it liked cleaning up glass for downstream users, said Cal Tigchelaar, company president.

“We used to have very large costs of getting our material handled and taken away. That’s gone to zero now,” he said.

Glass recycling has been stressed in various parts of the U.S., and some programs, including Houston’s, have removed the material from curbside collections. Challenges and solutions were also explored in a glass-focused session at the 2016 Resource Recycling Conference.

In the webinar, Tigchelaar and Angel acknowledged the difficulties of recycling glass: Insufficient downstream capacity in some markets, stringent specifications for processing it into products and a relatively low value with inputs costing more than for some higher-value materials. But they touched on ways MRFs can navigate those challenges. They also highlighted the financial and environmental benefits glass recycling yields.

RMC says its MRFs, mostly in the Chicago and St. Louis areas, are among the largest in the country in terms of volumes handled annually. In Chicago, an RMC MRF also operates as a secondary glass processor.

Before 2005, RMC supplied single-stream glass to an outside glass processor, but RMC wasn’t able to get the company to take all it needed to ship, so the material piled up at the MRF. The mound reached 15,000 tons, leaving staff to walk around it “with a sense of futility,” Tigchelaar said. Additionally, the tip fee costs were high: One RMC facility alone was spending $80,000 a month to send glass to a downstream processor, he said.

Then RMC invested in glass beneficiation equipment from Austria-based Binder & Co. The equipment has allowed it to remove contamination and sort glass by color. The line includes screens, magnets, dryers and vacuums, all of which works to remove lids, rings and labels before material enters the optical sorters for color separation.

“All of this is to say that there’s a lot of contamination in the glass,” Tigchelaar said.

Machinex has partnered with U.K.-based Krysteline Technologies, which makes glass clean-up systems. Angel, from Machinex, spoke about the Krysteline systems it provides in North America to reduce contamination and sort by size, boosting recovered glass values.

The first system is strictly an air classification system, which uses a vacuum system to remove paper and labels. The second is an additional size-classification system relying on trommels, which separate material by size. Glass pieces between three-eighths of an inch and two and one-quarter inches can be sent to a secondary processor.

Tigchelaar said he sees a future in MRFs processing glass to create their own products, including for lower-value applications such as road bed filler. Some MRFs, or even collaborations between several MRFs, may go further and supply cullet to bottle and fiberglass manufacturers.

When MRFs transport recovered glass to secondary glass processors, they’re moving a substantial amount of trash, including up to one-fifth of the stream, he said. That results in additional carbon emissions, and it hurts the economics of glass recycling.

“The thing to do is to have that cleaned up at the MRF level,” he said.

With half a million dollars, a MRF may be able to install equipment to reduce glass contamination from 20 percent down to 5 percent, he said.

Machinex is working with Krysteline and an extended producer responsibility group called Éco Entreprises Québec (ÉEQ) on what ÉEQ calls its Innovative Glass Works Plan. It includes installing $5.5 million Canadian (about $4.2 million) in glass clean-up equipment at five Quebec MRFs. Angel said the systems would be installed over the next couple of months. By early to mid-summer 2017, the partners should have good data on the MRFs costs to run the equipment, types of products they’re producing, markets they’re selling into and, most importantly, the prices they’re fetching.

Angel said Machinex is working on the development of markets that may be easier for MRFs to enter than bottles. Those include water-filtration media, cement additives, road base filler and sand blast alternative, Angel said. Those markets don’t require color sorting.

Tigchelaar sees recycling into bottles as the highest and best use, because they can be recycled again. RMC sends color-sorted amber and flint cullet to local bottle manufacturers, fetching in the area of $60 a ton and $80 a ton, respectively.

The next best use for recovered glass is in fiberglass insulation, Tigchelaar said, a product that won’t be recycled but is expected to last a long time. Up to 60 percent of the stream consists of green glass and fines, or material less than three-eighths of an inch. RMC doesn’t have a Chicago area market for it, so it dries, crushes and screens it to seven-one-hundredths of an inch before shipping it via rail to out-of-area fiberglass manufacturers.

Further down in his ranking is processing glass into a sand blasting media to replace that made from coal slag. RMC produces a small amount of this product, selling it in 3,000-pound bags.

Tigchelaar acknowledged the cost challenges. For example, OCC can fetch $130 a ton while glass can fetch half that. A MRF can create an OCC bale by dropping it straight into a baler, but glass requires more equipment, which adds operating and maintenance costs.

Still, RMC, which has a high enough volume of glass to justify the investments, has generated adequate returns and considers glass a “good core business.”

And he pointed to the benefits of recycled glass for manufacturers: lower energy costs, greater material yield compared with virgin resources and reduced carbon emissions.

“The environmental benefit of it when it’s recycled, that should be given very high marks and it should be approached from that perspective,” he said.