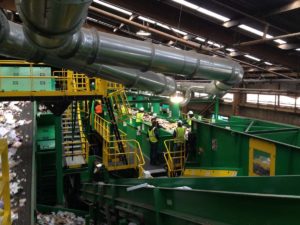 Upgrades to a San Francisco materials recovery facility have boosted throughputs by nearly 40 percent and ensured the adaptability needed to confront an evolving ton. Recology, which operates the state-of-the-art facility, provided Resource Recycling with details of the major upgrade.

Recology, one of the country’s largest haulers, recently completed an $11.6 million upgrade to its Recycle Central MRF in San Francisco.

An employee-owned company headquartered in the city, Recology calls it the “most modern recycling line in the country” and “the backbone of San Francisco’s recycling program for bottles, cans, paper, cardboard, and other recyclables.”

“Recology and the city of SF together are choosing to invest in the improvement of our recycling systems so as to recover more resources in our community,” according to a statement from Recology. “As others are slowly divesting from recycling plants or potentially recycling in general, Recology and San Francisco feel it’s important to not only maintain recycling infrastructure but enhance its abilities so that more of the materials being discarded can be recovered and put to their next best and highest use.”

– Glass clean-up: Separation of glass from similarly sized paper, metal and plastic occurs in Titus’s patented glass cleaning system, which utilizes screens, magnets and air to generate a three-mix glass commodity. The system replaces one more than a decade old.

The improvements were completed by two companies, Titus MRF Services and Van Dyk Recycling Solutions. They ensured the MRF continued to operate during the upgrade, the new system was integrated with the existing one and the project was completed within a tight timeframe, according to Reed.

The improvements allows the City by the Bay to adapt to the evolving ton, including an increase in small- and medium-sized boxes from e-commerce and lighter plastic food and drink packaging, according to a Recology press release.

“The new line will also provide the flexibility to recover new materials in the future,” the release states.

The MRF on Pier 96 has drawn interest internationally. Over the past four years, delegations from 82 countries have toured Recycle Center.

A large investment at a MRF in Quebec, Canada has allowed it to produce cleaner streams of paper, plastics and aluminum.

“For EBI Environnement, continuous improvement of our way of doing things and equipment are the center of our preoccupations,” Audrey Castonguay, director of communications at EBI, stated in a press release. “With our new equipment we can increase the overall quality of material recovered, particularly with fibers, plastic and aluminum containers.”

Previously, employees had to manually sort an enormous quantity of materials, according to Machinex. The equipment allows clean streams so the downstream manual sorters can now focus on quality control.

The $1 million project at Rumpke Waste & Recycling’s Dayton, Ohio glass facility has meant cleaner cullet bound for bottle and fiberglass manufacturers. The facility processes about 60,000 tons of glass per year.

The project included the installation of extended conveyors, an enhanced dust-collection system and technology to remove fines such as paper labels, dust, dirt and other organic materials. Rumpke held a grand opening ceremony for the improvements on America Recycles Day, Nov. 15.

“By creating this system Rumpke has developed the infrastructure to reduce the amount of trash going to the landfill while creating jobs and raw materials needed by our manufacturers,” Steve Sargent, Rumpke’s director of recycling, stated in a press release.

Glass entering the facility comes from residential curbsides and commercial customers in Ohio, Kentucky and Indiana. Glass accounts for up to one-fifth of the recycling weight collected by Rumpke.

The retrofit project received financial assistance from the City of Dayton and the Ohio EPA in the form of a collaborative $50,000 grant. Rumpke also benefitted from intellectual and research support from University of Dayton students who have helped assess the process and material quality and identify improvements.

The Dayton glass processing facility was featured in the print edition of Resource Recycling as the August 2016 MRF of the Month.