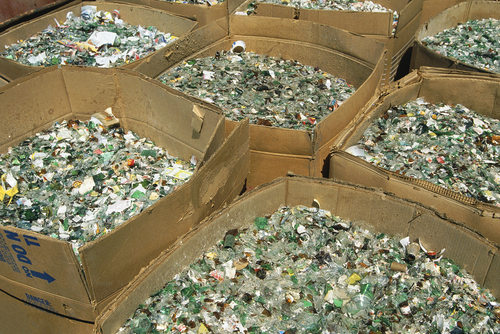 California Department of Resources Recycling and Recovery (CalRecycle) staff say existing state regulations force them to shut down secondary glass processors with residue rates above 10 percent until those plants receive solid waste facility permits. But, to avoid doing that, CalRecycle staff have drafted emergency regulations calling for periodic inspections instead.

The dirtier downstream mix of recovered glass is one consequence of fewer container redemption opportunities in the Golden State. It’s also been cited as contributing to a lower statewide recycling rate.

Under financial strain, container redemption centers around the state have been closing, reducing opportunities for consumers to redeem their bottles. That has led to households placing more of their glass in curbside carts for delivery to materials recovery facilities (MRFs). By the time the glass leaves MRFs and heads to secondary glass processors, it’s more contaminated than the glass originating at redemption centers.

“Redemption centers are closing, more material is going into the blue bin, so our percent of material coming in is shifting to higher levels of single stream versus redemption material,” Bucey said. “Which has compounded the fact that premix is getting dirtier.”

“The result of glass getting dirtier with more and more contamination has put us against the thresholds in California,” he added.

With its six locations in California, SMI processes most of the state’s recovered container glass.

The issue came onto CalRecycle’s radar after other public agencies saw contamination in loads of glass during site visits and notified the department, Oldfield said.

“The other agency staff were aware of the definitions of solid waste facility and thought we should look into the situation, which we did and confirmed the findings,” he said.

Under existing state rules, glass processing facilities disposing of more than 10 percent of incoming material must be regulated as solid waste handling sites, said Mark Oldfield, CalRecycle spokesman. Those sites can’t operate without permits, so the department would have to shut them down until they receive permit approval, a process that can take years if there are complications in environmental reviews or lawsuits.

“Preliminary information indicates that this issue may be true for up to 90 percent of the state’s glass processing infrastructure,” according to a department memo.

Regulations require permits for facilities with high residue rates because that waste can present public health and environmental issues.

CalRecycle staff wrote that temporarily shutting down six facilities handling 90 percent of container glass would mean “a crippling interruption in the state’s ability to divert a major recyclable waste stream from landfill disposal.” It could mean more than 900,000 tons of glass going to landfill and would also threaten the viability of the glass businesses necessary to accommodate the state’s recycling needs, they wrote.

Under the emergency regulations, glass processing facilities with 10-plus percent residue would fall into what’s called the “notification tier” of regulation, the least onerous level of regulation, other than a full exemption. They would be required to file paperwork and undergo inspections as often as quarterly or as infrequently as once per year. Inspectors would be looking for potential threats to public health and the environment.

“I don’t anticipate any problems, but we are in a little bit of uncharted waters,” he said.

CalRecycle Director Scott Smithline on Sept. 26 approved submitting the emergency regulations to the department’s administrative law office, which must review them before they can go into effect.

Oldfield noted that permanent regulations will follow. Permanent ones will “determine the appropriate level of oversight needed to ensure any potential public health and environmental concerns continue to be addressed.”