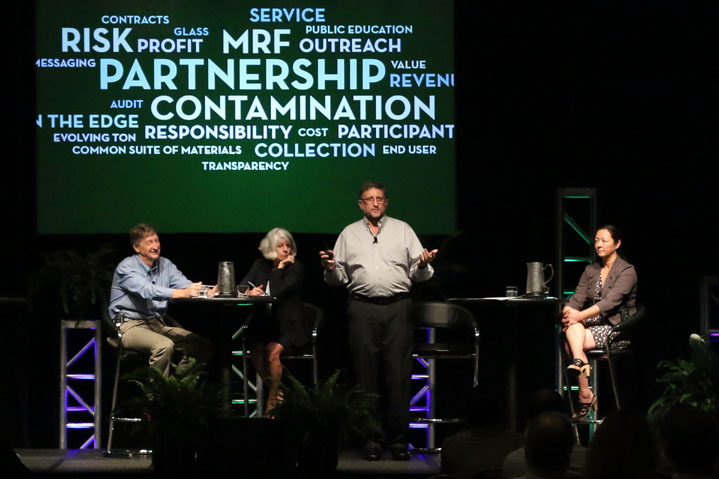 When it comes to materials processing contracts, the debate is often framed in black and white: taxpayers versus shareholders battling to collect the financial rewards of recycling and avoid the costs.

But, according to one industry veteran, negotiators should understand the other side’s needs, and that recognition should be reflected in contracts.

Mouw, from the North Carolina Department of Environmental Quality, was one of four speakers to take the stage at this year’s Resource Recycling Conference to discuss the crafting of MRF-municipality contracts. The session included Susan Robinson from Waste Management, Mitch Kessler from Kessler Consulting and Anne Germain from the National Waste & Recycling Association (NWRA).

The session, part of the conference’s first-ever MRF track, explored timely issues affecting contracts, including lower commodities values, higher contamination rates and a constantly evolving ton. Adding to the tension in those areas is the fact that the public and leaders are pushing for ever-higher diversion rates.

Realities of the ton

For the past two decades, North Carolina has tracked the blended value of commodities coming out of the back end of materials recovery facilities (MRFs) in the state. Those prices have dropped in recent years, and the reality is they’re not expected to rebound fast, Mouw said.

“The blended values will stay close to operating costs of MRFs for a very long time to come,” he said. “And that’s what we have to work from.”

Many contracts were written with the belief that China would continue to show enormous demand for imported scrap and that materials scarcity would drive recycled commodities prices, he said. But analysts now predict demand for recyclables to remain lukewarm for the foreseeable future.

Robinson of Waste Management focused on the changing stream, noting that her company has seen a significant shift of materials heading into MRFs resulting from the evolving ton and contamination over the past decade.

For example, a decade ago, when some existing contracts were signed, newspaper tonnages sat at the heart of the deals, she said. Today, it’s a greatly diminished fraction of the stream, and in another 10 years it will probably disappear completely.

Given the changes, NWRA’s Germain called for flexibility in contracts, allowing both the addition and removal of materials, depending on commercial markets for the commodities.

“We’ve seen some markets come out of nowhere,” she said. “But those markets sometimes disappear and those should be accounted for in the document.”

Mouw presented what he believes is the framework for a fair contract: the inclusion of floor prices per ton, which could be negative in current markets. The model agreement also included options to share revenues when prices are high and noted clearly defined residue thresholds with expectations of who pays to dispose of residue.

Contracts should also have a long enough term with renewal options to allow MRF operators to upgrade equipment and simultaneously assure the community of future processing capacity, Mouw said. Lastly, contracts should call for stream audits and establish expectations for continued communication.

Robinson focused on how contracts can be built to effectively react when conditions shift in the middle of a deal’s time frame, which tends to be five years for MRF contacts and seven or more years for collection contracts.

She also said that if contracts have a zero floor price provision, they should allow MRF operators to manage materials with zero or negative value outside the recycling program. She also called for triggers to allow contract changes based on changes in material quality and or shifts in the mix of inbound materials, as well as commodity pricing fluctuations.

“Say this is how we’re going to conduct the audit, everybody agrees to it, you agree on a frequency and then you agree on how adjustments to the blended value or compensation structures are going to occur as a result of this,” she said.

At the negotiating table

Handshake deals, still relatively common in the industry, don’t deliver the trust and transparency that’s needed today, Mouw said. Issues such as shared risk and reward in changing market condition and ongoing communications need to be addressed in writing.

“The current dialogue is about uncontrollable issues that are convenient because they’re virtually unsolvable,” he said. “We could adjust for them in contracts, but we can’t fix any of those directly.”

He believes it’s time to shift the dialogue to the core issues that can be controlled: identifying objectives, communicating openly, providing full transparency, recognizing the costs of service and realizing that all waste and recycling is local.

For example, he said, the industry has failed to be transparent about the costs of recycling collection, processing and marketing. There’s a joint responsibility to communicate that message, he said, noting that many of his municipal clients resist doing so.

He also called for transparency between the public and private partners.

“I don’t think you can be transparent enough,” he said. “I’ll leave you with an image: the clear shower curtain. That’s what you should be seeing. Sometimes it’s pretty, sometimes it’s not.”