Q&A: ‘Trashbot’ could be the future of public-space collection 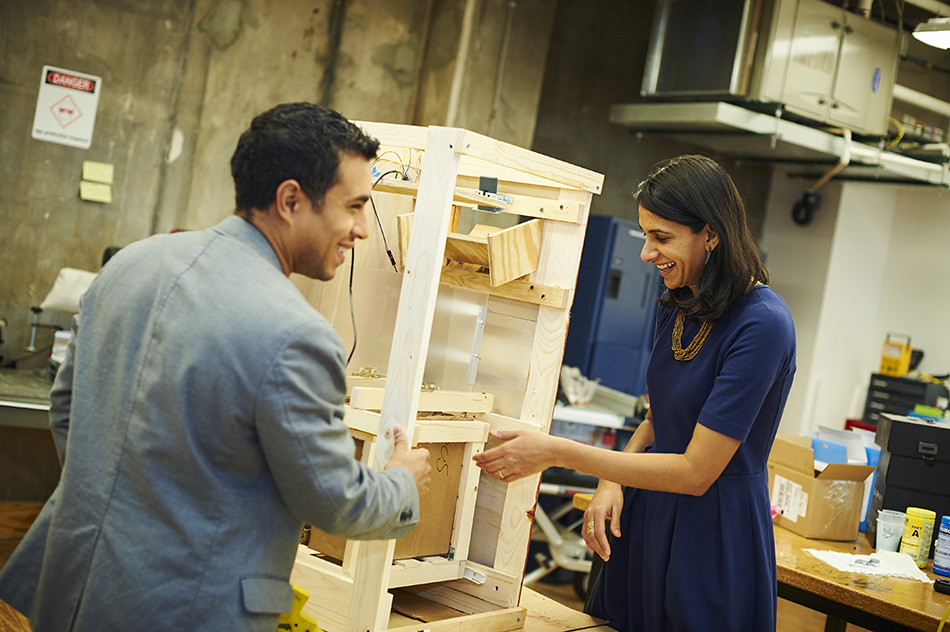 A startup is using robotics, artificial intelligence and the cloud to combat recycling contamination at one of its sources: public collection bins.

Pittsburgh-based CleanRobotics developed a robotic receptacle that automatically senses and sorts materials into either a landfill-bound garbage can or single-stream recycling bin. The Trashbot, as it’s called, uses a variety of sensors to keep non-recyclable materials out of the MRF-bound bin.

The cloud-connected devices can be programmed remotely to accept or reject different materials, depending on what’s desired in the local recycling stream. They also provide notifications when the receptacles are full, helping to improve collection efficiencies.

The company, nearly a year old, plans to target sustainably minded businesses needing nice-looking receptacles, said Charles Yhap, CleanRobotics’ co-founder. CleanRobotics is planning to start by charging around $1,000 for a Trashbot but eventually wants to move toward providing the hardware as a service and charging wireless connectivity subscription fees.

Yhap, the company’s chief operations officer, spoke with Resource Recycling to provide more details about the technology and efforts to get it into the marketplace.

Question: How exactly does the receptacle work?

Yhap: The CleanRobotics pilot is called Trashbot and, essentially, as a user, what you would do is you would walk up to it and throw an item of waste into one of the chambers. From the user’s point of view, you just see an opening. Toss it in and it senses it, makes a classification and then either sorts it into a landfill bin or a recycling bin. And that’s it. Then you just walk away and don’t have to think about it anymore.

Yhap: Exactly right. Recycling rules and capabilities vary by locale. For us, there’s no education that’s required. It’s just a software update. The machine is cloud-connected so we can just push it to the relevant areas to accommodate recycling capabilities.

Question: What kind of sensors does it have to do the decision making?

Yhap: Right now, we have three sensors. We have a computer vision camera, a weight sensor and an inductance sensor. But most of the classification is happening with computer vision, which is just a red/green/blue camera. The way the machine works is it uses a machine-learning algorithm that improves over time. To start off with, a human being has to basically train the computer and then kind of code the types of materials. We’re working on developing another sensor that will also be able to give more specific resolution on the type of material that’s going in, in addition to the computer vision that’s just the regular camera. You can think of it as computer vision on steroids.

Question: So it has an element of artificial intelligence, then, if it’s able to learn on its own?

Yhap: Yes. So right now it has to be trained by a human and double-checked by a person, which right now is engineers. I’m going to be stepping in and doing that as well in the next week. But, eventually, it will be learning things on its own. And the more Trashbots we have out there the more data we have coming in, the better and more accurate it will get.

Question: What does commercialization look like right now? What’s its status?

Yhap: We were accepted to a hardware accelerator in China. We went in January, myself and two engineers, and we built one prototype. We came back from China with the prototype. We just finished piloting it at a large tech company in Pittsburgh. The pilot actually went way better than we expected. We expected the sorting accuracy to be around 60 percent. It came back at 81 percent after just very basic training. So we’re very excited about those promising results. The next step is to implement the redesign we have with the current prototype to make it better, faster, more robust, and then pilot that and get some more user feedback at the Pittsburgh International Airport and the David L. Lawrence Convention Center. Then, after implementing those lessons, (we’ll) make version 2.5 or 3.0 and go to market with that. But we are taking pre-orders.

Question: How did you first develop this?

Yhap: The idea was actually my co-founder’s (company CEO Vaish Krishnamurthy). Have you ever been to Whole Foods and you’re on your way out and you see these places to put your trash? Both of us are very environmentally conscious and we care about recycling, we care about doing things right, but you go up to the hot bar and on your way out you’re trying to figure out where to put your trash. It just takes so long and it’s so confusing.

Question: Are you looking for feedback from the recycling industry?

Yhap: We’re always looking to speak with folks in the industry: recyclers, commodity purchasers, haulers. If anyone is interested in speaking with us, we love learning and getting more information on folks’ experiences and pain points and ways that we might be able to make this recycling value chain more profitable and more cost effective and better for the environment. We’re eager to speak with anyone and everyone. We’re also hiring, so that’s one thing to put out there, too.