Organics recovery at a crossroads 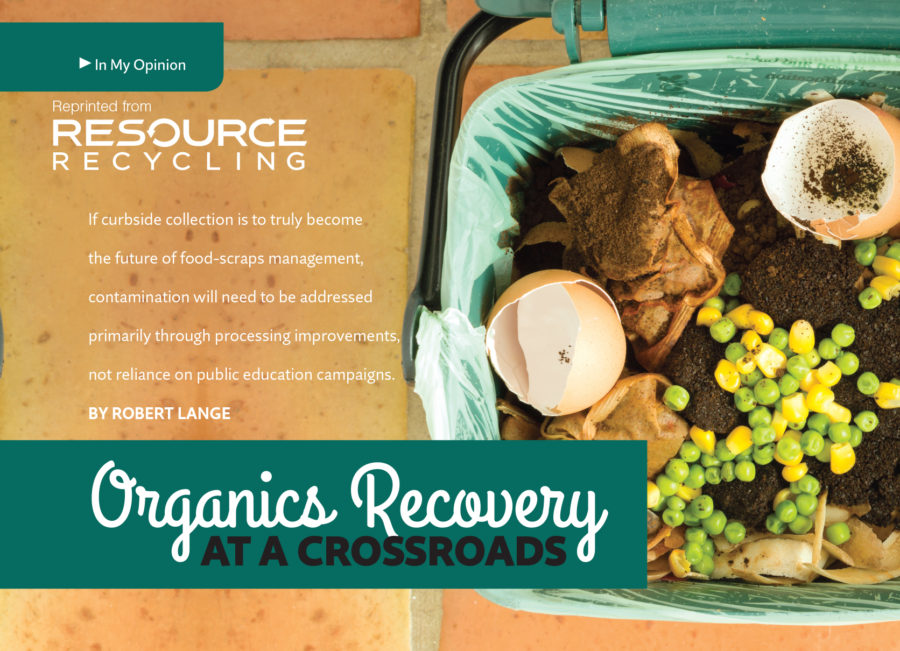 Over the last half decade, the topics of food-scrap collection, composting and new technology for organics conversion have generated as much media heat as a well-managed compost pile.

Food scraps, on the other hand, stand out as an opportunity, given the high percentage of this material typically contained within a municipal or county waste stream. And the push for moving forward with food-scrap initiatives has come primarily from environmental advocates and elected officials, who are well aware that in today’s world, rising diversion rates and other green accomplishments can equate to political gold.

However, as we’ve seen in the traditional materials stream, greater tonnages of any municipal material typically come with a major catch: contamination. As more food-scraps programs become implemented, stakeholders will inevitably encounter plastic bags and other non-organic items in the mix. This leads to some key questions: How clean a stream can we reasonably expect in the realm of curbside food-scrap collection? And where should we focus efforts to remove items that don’t belong?

Food scrap diversion stands at the same crossroads that traditional recyclables encountered decades ago. In most cities and counties in the U.S., there are now small but enthusiastic community-based volunteer efforts available to both willing residents and commercial entities to ensure food scraps are captured for local composting. 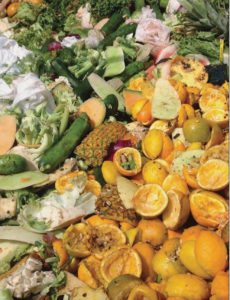 Extremely clean loads of food scraps are necessary for programs relying on yard debris processing facilities, which have generally been unable to handle high contamination levels.

These community-based efforts are designed in a similar manner as the early drop-off programs for metal, glass, plastics and paper, relying on the discipline of individual volunteer participants to drop off food scrap loads free of both non-organic contaminants and items, such as meat and dairy, that are more challenging to compost. In some instances, local entrepreneurs provide direct collection using bikes, vans and other low-tech means.

With enthusiasm bubbling among residents and elected officials, municipal and county solid waste management organizations have begun to explore the viability of providing direct curbside service for food scraps. These efforts tend to rely upon an infrastructure developed and permitted primarily to accept and process yard debris. The initial assumption has been that set-outs by residents will be clean enough for existing yard debris facilities to accept with little or no modifications to equipment or permitting.

However, from both the operational and regulatory standpoints, yard debris facilities are not equipped to allow for the high level of contamination that typically accompanies post-consumer food-scrap loads.

Yard debris composting facilities have gone through their own evolution over the last decade, and the transition has been based on taking in fewer contaminants, not more. Early on in the yard debris sphere, it was deemed acceptable to allow residents to set out material in plastic bags. The thinking went that the convenience for residents provided by bag allowance would result in higher participation and capture rates. However, it quickly became apparent the typical yard debris facility could not easily remove plastic from the massive loads collected and delivered in the fall and spring of each year.

Facilities use heavy equipment designed to deal with the incoming material in bulk and operate in large open fields. Any de-bagging that may take place happens as part of the windrow development and turning process over the months during which the composting process takes place. This leaves the final de-contamination of loads for the back end of the process when the fully composted organics, including the remaining non-organic contaminants, are ready for screening.

The screening process, while effective to a degree, has proven limited in its ability to fully remove non-organic contaminants (particularly plastics) from the finished compost. For this reason, most yard debris collection programs have adopted program guidelines that require program participants to set out yard debris for collection either loose or only in paper bags.

In short, the collection and processing of yard debris over the last decade or more has undergone an evolution in reverse, from the tolerance of higher levels of contaminants to the setting of lower and lower levels of tolerance for non-organic contaminants. 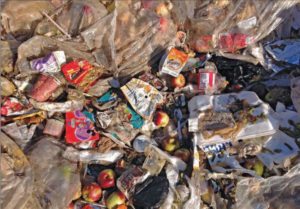 The push for more widespread collection of organics inevitably results in dirtier loads.

One reason for this is related to the plastics bag challenges outlined above. Set-out convenience options must be afforded participants of food scrap source-separation programs to result in anything close to acceptable participant set-out rates. And the natural starting point when it comes to establishing this critical convenience component is plastic bag acceptance.

Food scraps are highly putrescible, beginning to decompose shortly after being placed in a receptacle for set-out, unless refrigerated beforehand. And the warmer the weather, the more rapidly this process is initiated. As part of the decomposition process, food also begins releasing odors and liquids as well as attracting vermin, running the gamut from fruit flies to rodents. These elements make the handling of food scraps more challenging than yard debris for the generator, the collector and the processor.

Clearly, allowing plastic bags to be used to hold food scraps will help mitigate those issues and open pathways for greater program participation. But that creates problems at the processing stage.

There are people, particularly the manufacturers of biodegradable bags, who suggest that the use of biodegradable products as a substitute for traditional plastic bags will support food scrap processing efforts. There are several reasons why this is a faulty assumption.

Let’s avoid entering the quagmire of analyzing what is and isn’t “biodegradable,” and instead look at processing realities when large amounts of organic material are handled. To process post-consumer source-separated food scraps, which will inevitably contain traditional plastic bags or biodegradable bags, operators must rely on an infrastructure that can quickly and effectively remove the organics from the non-organics.

In such a process, differentiating traditional plastic bags from biodegradable bags is not possible, at least not at the present state of mechanical separation. Furthermore, trying to remove non-organic items in general at this point will also result in the loss of many of the actual organic materials targeted by programs. The present state of mechanical separation technology is most successful at separating wet organics from the non-organics and dry organics only. To further separate out the dry organics remaining with the non-organics would be cost prohibitive.

Secondly, given the primitive state of manual processing at many facilities receiving food scraps, it is impossible to expect that distinctions can be made between traditional plastic and biodegradable plastic bags. Most of these facilities rely on manual laborers to wade into and sift through piles of food scraps to separate and remove non-organics. In this unpleasant process, there is no time to make a reasonable determination about the actual composition of different types of bags that are visually identical. Even if a bag’s labeling supplies that information, there is neither time nor the proper conditions to facilitate that determination.

And what about the development of alternative organics recovery technologies, such as anaerobic digestion? It’s true many of these new technologies have advanced significantly to the point where clean organics can find a home as feedstock. However, as described above, clean organics are not what is generally supplied by the participants of public or private programs, nor what can be delivered by the collection vehicles servicing these programs. 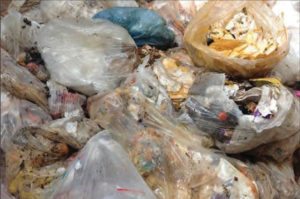 Plastic bags remain a paradox for leaders of food scrap programs. Bags are necessary for high resident participation, but they are not easily sorted from material at the processing stage.

While there are some conversion technologies that can handle higher levels of contamination, at present only a small number of these options are operational and many of them remain untested when it comes to curbside-collected material.

Embracing contamination instead of battling it

So how can we resolve the food scrap contamination issue? More public education is the traditional answer. The belief is that if enough outreach is provided, the public’s behavior will eventually change to significantly reduce the amount of contaminants to a tolerable level.

Unfortunately, this strategy ignores the fact that non-organic contaminants will always be part of set-outs in a large food scrap source-separation program. Without the allowance of those non-organic contaminants, widespread resident participation will not occur. And in the hierarchy of needs for program managers, participation/quantity is ultimately far more important than the quality of the material collected. Quality can be addressed through advances in technology, but without full and regular participation by program participants, no food scrap source-separation program can survive for long.

That means programs will require processing-site operators to abandon demands for pure organics and embrace the fact that curbside-collected food scraps and other organics are always going to include non-organic contaminants. Rather than expecting the generator to behave better or the collector to radically change the behavior of its customers, it is the job of those accepting organics from source-separation programs to clean them up to the standard needed to produce viable feedstocks. A processing infrastructure with mechanical equipment designed to free organics from non-organic contaminants quickly and efficiently with limited manual labor is required.

Furthermore, as we collectively transition from boutique pilot programs to municipal and countywide source-separated food-scrap programs, we in the field of solid waste management should be striving to replace all manual separation of organics from non-organics with mechanical separation as quickly as possible. While targeting food scraps is important from a solid waste management and sustainability standpoint, it should not be accomplished by further leveraging the income disparity inherent in our economic system. Environmental justice is frequently cited in relationship to the siting of solid waste-related facilities, but so far I have not heard complaints about the fact that some of the country’s current food scrap source-separation programs are wholly dependent for their success on the poorest and most disadvantaged amongst us wading through post-consumer food to remove contaminants.

As with any alternative that results in a higher net benefit, upfront costs will be part of the equation. Who will pay for this necessary new infrastructure? As we’ve seen in regards to the processing of traditional recyclables over the last three decades, each political jurisdiction must create its own path to implementation.

In some parts of the country, government has invested heavily in infrastructure development and absorbed a substantial portion of the risks associated with potential program failure. In other areas, the private sector has chosen to accept the substantial risks alone in return for potential business opportunities and profits. In either case, stakeholders can expect challenging times as they aim to achieve the balance required for “sustainability.”

Robert Lange is the director of the Office of Beneficial Reuse Planning, Infrastructure Development & Management within the Bureau of Solid Waste Management of the New York City Department of Sanitation. He can be contacted at [email protected]