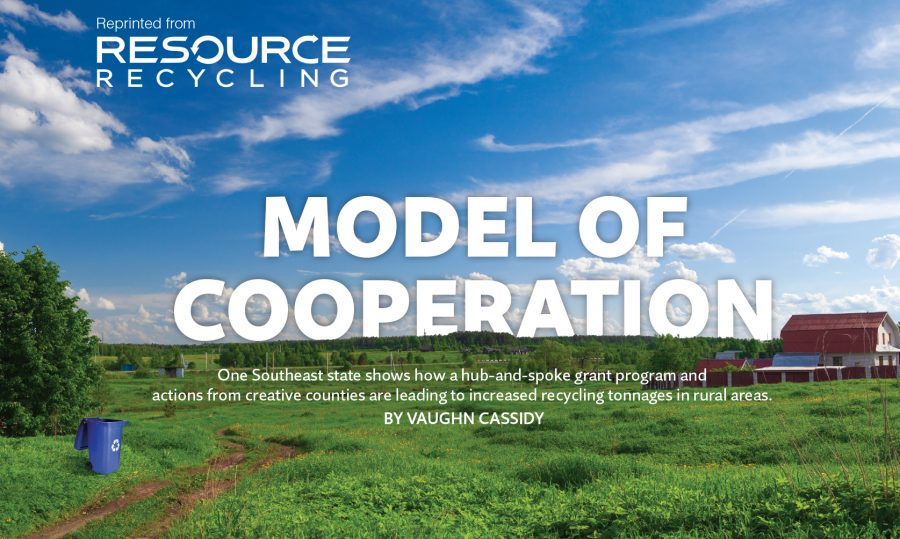 In a challenging economy, communities are leveraging strategic partnerships to provide increased recycling opportunities while maximizing revenues and reducing operational costs. The chief hurdle for local recycling programs is making sure enough material is available to make collection and processing affordable and practical. For rural areas this tends to be an even greater challenge.

The hub-and-spoke model has proved to be a successful strategy in overcoming barriers for rural recycling programs. This involves one county or city acting as a central processing center, or “hub,” that receives materials from surrounding communities, which act as the “spokes.”

The benefits of this model are many, including improved collection efficiency, reduction in operating costs and better participation from the residential as well as industrial community. Efficient usage of balers, which often represent one of the largest expenses for recyclers, provides an example of potential operating-cost savings in this model. In the hub-and-spoke arrangement, the participants share costs, enabling them to take actions such as purchasing a horizontal baler that handles larger volumes and creates denser bales in comparison to a vertical baler.

One area’s 100 percent boost in tonnage

To further understand these efficiencies, we can look at the West Tennessee Regional Recycling Hub, located in Henderson, Tenn. The project came out of a request for proposals from the Tennessee Department of Environment and Conservation (TDEC).

The counties of Chester, Hardin and McNairy partnered to write and submit a grant proposal in 2011 to establish a regional recycling program. The partnership received a grant in the amount of $282,500 from the TDEC’s Division of Solid Waste Management to support a pilot hub-and-spoke project. The hub received a second grant in 2012 of $300,000 to upgrade equipment and buy the additional balers needed process the increased materials received.

In 2011, the counties recycled just over 1,000 tons from their combined programs. In 2013, the hub recycled 2,160 tons, including 18 tons of electronics and nearly 3 tons of batteries. The counties of McNairy and Hardin recycled 816 tons, and nearby Decatur County, not officially part of the hub, contributed 14 tons. The region saw a tonnage increase of more than 100 percent over those two years. Last year Chester County recycled over 1,500 tons and the total for the hub was 3,001 tons. Partner counties now also include Hardeman County and Henry County.

Those extra tonnages made a deep impact. Before the siting of the hub, Hardin County had difficulty making the economics of recycling work. “This makes recycling practical for us,” said Randy Etheridge, solid waste director for Hardin County. “Every situation in the state is different, but this approach helped us reach our goals.”

In 2013 Hardin County recycled over 11 tons of cardboard alone – a significant increase over the previous year.

A hub for outreach

Education is another element that is being addressed by the counties in Tennessee. Though often neglected in many local programs, teaching residents about recycling is very important. Citizens who are well-educated about how and what to recycle can vastly improve the efficiency and effectiveness of a county program. With such outreach in mind, an old East Chester modular school building has been remodeled for use as the West Tennessee Regional Recycling Hub Education Building. 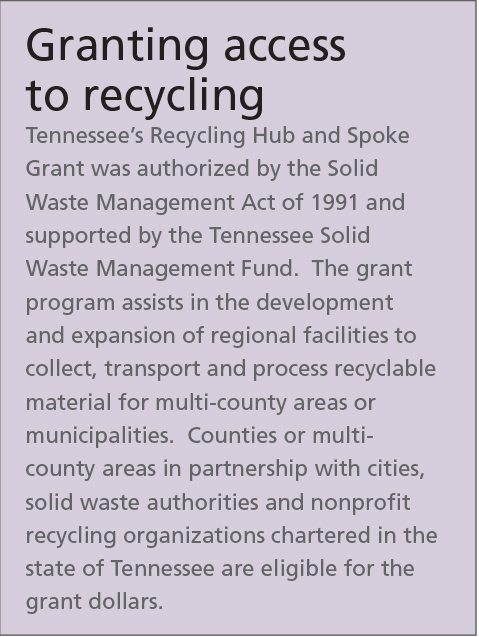 Amber Greene, the recycling coordinator for the Chester County Solid Waste and Recycling Department, works all year to train students, residents and businesses on recycling. “I go into the schools and give presentations, and I hold poster board contests and Christmas recycling contests,” she explained, noting the Chester County Middle School came in fourth in the state in the Keep America Beautiful Recycling-Bowl last year. “It’s fair to say that our numbers doubled last year due to our education in the counties.”

According to Greene, the curbside program operated by the City of Henderson currently has 397 residents subscribed with more signing up almost daily. All three counties have gone to curbside recycling programs that are growing in popularity. Industries are benefiting as well. Automotive parts manufacturers Arvin Sango and Premier Mfg. in Chester County, for example, are taking advantage of the West Tennessee hub to help them reach their goal of sending no material to landfills.

The success of the hub-and-spoke model is being re-created throughout the state, with 29 counties participating in the last three years and nearly $4 million in grant money distributed for specific activities to reduce costs, promote recycling and increase the revenues for cities and counties.

This model of cooperation, exemplified by the West Tennessee Regional Recycling Hub, will continue to benefit Tennessee for years to come. A recent report from the state’s Division of Solid Waste Management stated the following: “Many of the Tennessee hub-and-spoke projects reached planned capacity three to five years ahead of projections. This is a testimony to their success.”

Vaughn Cassidy is an environmental specialist with the Office of Sustainable Practices in the Tennessee Department of Environment and Conservation. He can be contacted at [email protected]