One of the most iconic statues in Atlanta sits in the city’s Woodruff Park and depicts a woman with outstretched arms raising a phoenix skyward. The artwork symbolizes Atlanta’s rebirth after the Civil War to become a major international city. But in many ways, a bird on the verge of flight is also an apt symbol for Atlanta recycling.

In 2012, Mayor Kasim Reed announced a 90 percent diversion goal as part of a larger commitment to help make Atlanta a top-tier city in terms of sustainability. Power to Change, the city’s action plan to achieve that vision, identified 300 stakeholders that could work together within 10 impact areas (see graphic below). It’s clear waste diversion has a place at the table: One of the identified impact areas is materials management and recycling. 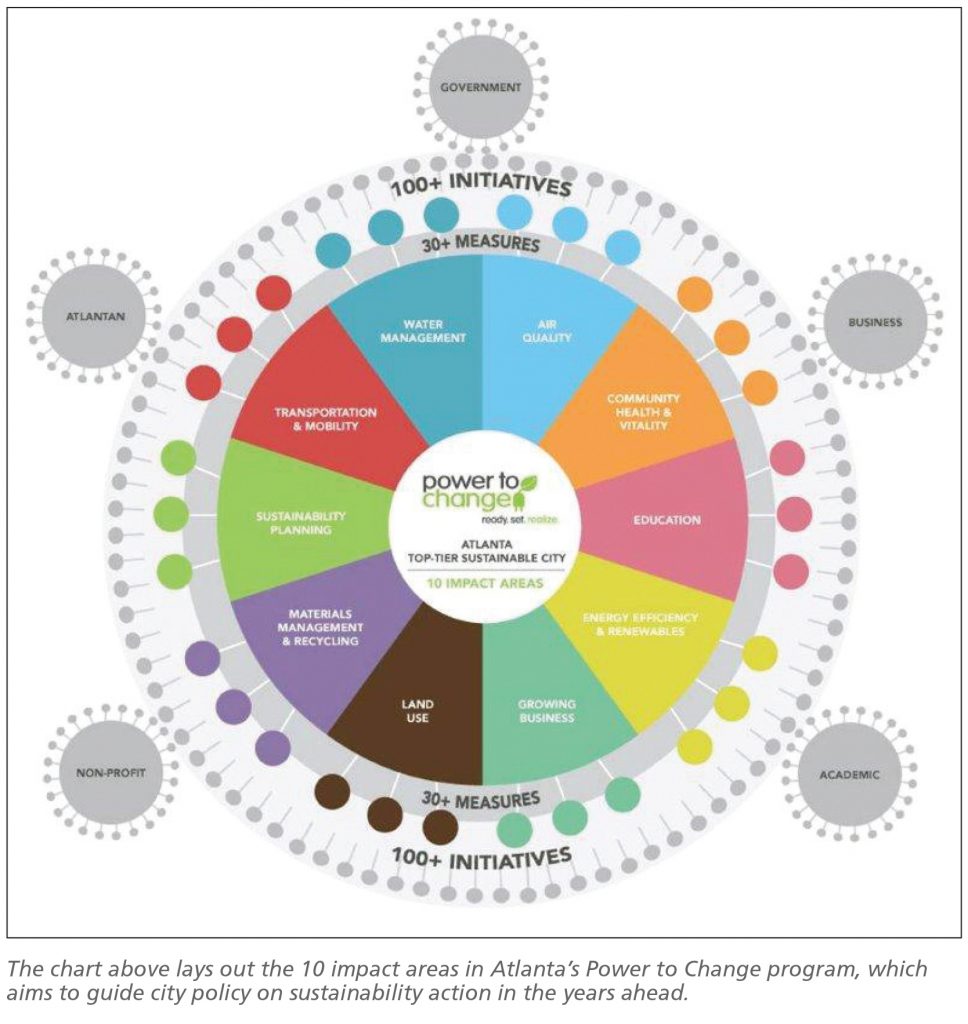 So how can this major Southeast metropolis move from plan to action on recycling issues? In short, the strategy is to appropriate attention to the multitude of different types of waste generators in the city. Less than half a million people live within the city limits, but the Atlanta metropolitan area has more than 5.5 million residents and an estimated 331,450 commute in for work daily. Furthermore, 44 million visit Atlanta each year, according to the Atlanta Convention and Visitor’s Bureau.

This article describes how a variety of partners are working together to target all the necessary segments of waste generation to progress toward Atlanta’s lofty goals.

Atlanta residents have had access to curbside recycling for years. But like many cities, Atlanta recently made big changes, transitioning to single-stream collection and processing. In the fall of 2012, the City delivered the last of the 96-gallon rolling carts to the 96,000 households served by the city’s Department of Public Works, replacing 18-gallon bins used in the past. The transition contributed to a nearly 14.4 percent increase in tons collected in the curbside program between 2012 and 2014, as shown in the table below. 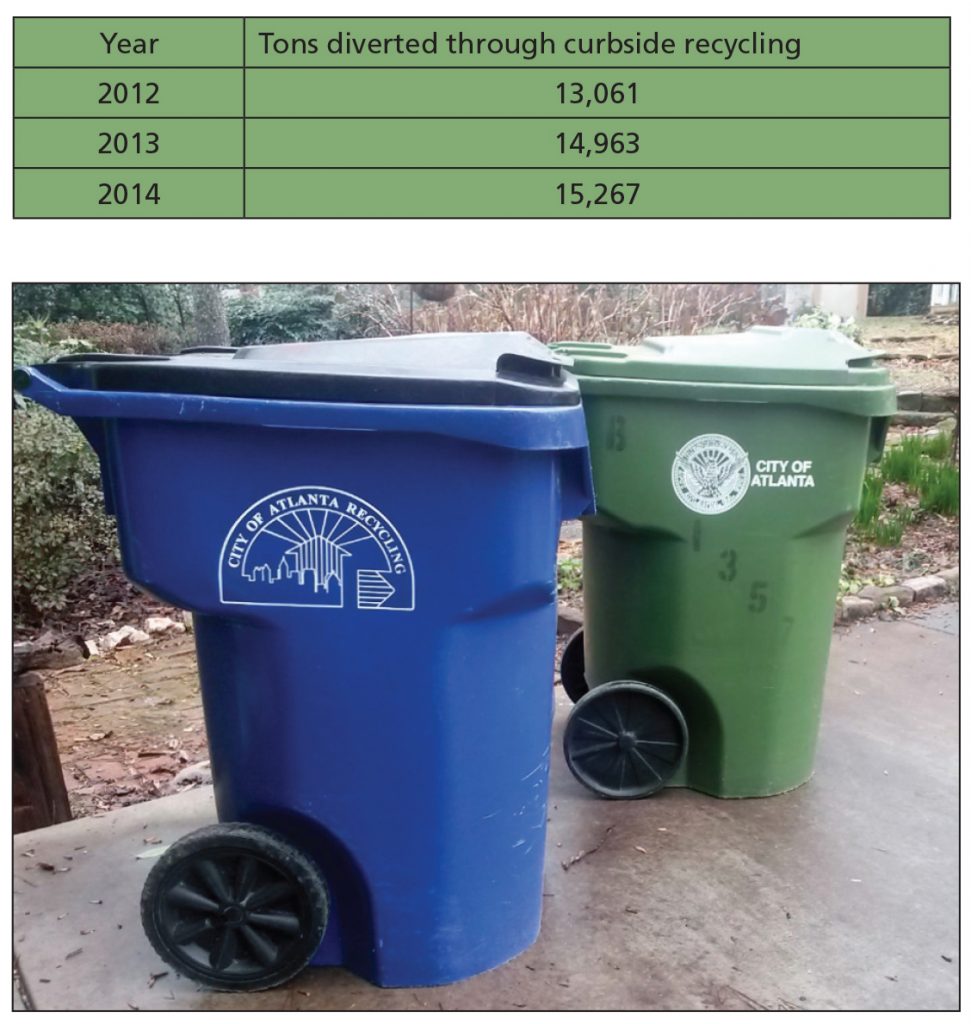 But the city is aiming for more. In 2015, after testing several approaches to encourage participation, the City of Atlanta, in partnership with a company called Recycling Perks, started an incentive program for households that recycle. Residents earn points toward goods and services at local businesses each time they place their recycling cart on the curb.

However, as community recycling leaders nationwide know well, these steps to increase diversion also have the potential to increase contamination. The City has taken steps to address this reality. When a recycling cart contains high levels of non-recyclables, collectors leave the materials in the cart (picking it up later in the week on a special garbage route). Collectors can also leave a contamination notice clarifying what can and cannot be placed in the recycling cart. After multiple violations, the City can issue a citation. To date, city officials have generally avoided moving all the way to the citation step, instead mailing a postcard to repeat violators and informing them of potential penalties and further details on what can and cannot be recycled.

Over half of Atlanta’s residents live in multi-unit structures that are not served by the city’s curbside program. Private haulers collect garbage from residences with six or more units, under contract with a property owner, manager or association. To ensure these residents also have access to recycling, the City passed an ordinance in 2007 that requires multi-family property owners (or property owner associations) to offer recycling. Property owners must provide at least 3 gallons of recycling-container capacity for each residential unit and must also arrange for collection and processing of, at minimum, the materials collected in the curbside program.

To demonstrate compliance, property owners or managers are required to report annually on the amount of recyclables collected. This reporting must include a description of the size and number of recycling containers on the property, as well as details on the service level for the receptacles. In an effort to ensure new multi-family properties incorporate space for recycling into site design, each building permit application must demonstrate that there is sufficient space to locate and service solid waste and recycling containers.

Starting in 2015, the City began to step up enforcement of this ordinance.

Meanwhile, a program aimed at collecting electronics, mattresses, paint and other hard-to-recycle materials has become more accessible to all city residents, in both the multi-family and single-family realms. Historically, Atlanta residents have taken items not collected curbside to one of several drop-off events around the city that are typically held three Saturdays each month. Keep Atlanta Beautiful has organized many of these regular drop-off events.

In November 2014, LiveThrive, a local nonprofit organization, opened a permanent Center for Hard to Recycle Materials (CHaRM) on land provided by the city. This facility, which is open three days each week, takes household hazardous waste plus a long and growing list of other materials. Between April and November of this year, the CHaRM diverted significant volumes of a range of materials as indicated in the following chart: 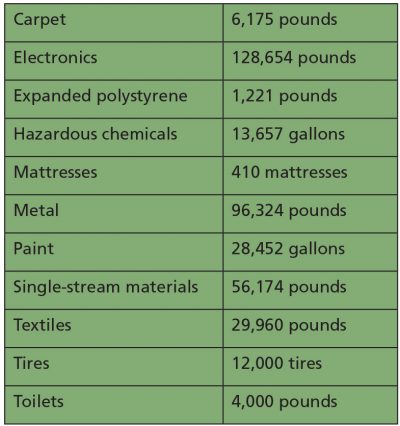 Business leaders and associations have spearhead many of the commercial recycling programs in the city, often through the city’s Community Improvement Districts (CID), which are authorized by the state to raise revenue for services, including recycling. The income is generated via taxes and fees on non-residential property.

One such CID, in collaboration with a community organization called Livable Buckhead, teamed with a private recycler to increase diversion and reduce waste disposal costs for neighborhood businesses. In its first several months, the first five buildings to participate in this program increased recycling by 18 percent. In addition, the Georgia Restaurant Association collaborates with the CIDs and the city on a “Zero Waste Zone” program in four business-dense communities. The effort has seen participation from over 50 businesses, primarily restaurants, and recently announced participants had diverted 1 million pounds cumulatively.

In a recent survey of commercial property managers in Atlanta, over 70 percent reported some type of recycling takes place on their properties. However, there is currently no consistent reporting mechanism to track the materials diverted through these efforts. In October 2015, property managers participated in a summit to discuss how to jointly increase recycling and reporting on their activities and tons diverted.

Meanwhile, the city’s “Better Buildings Challenge,” which has been very successful at encouraging and tracking reductions in energy and water consumption in commercial buildings, is putting more of an emphasis on tracking successes in waste reduction as part of this effort.

Out-of-towners: Initiatives at airport and elsewhere

For the 260,000 people passing through Hartsfield-Jackson Atlanta International Airport each day, the concourse spaces and waiting areas provide the first – and sometimes only – view of the city. Although the airport diverts a significant amount of the material generated internally, it has recently begun to focus on diverting what passengers generate. The airport installed 320 single-stream recycling collection containers in December 2014.

Additionally, the Department of Aviation is soliciting proposals for the development of a facility on airport property to recover material and energy from food residuals and other materials generated at the airport. Once this facility is operating, it will also receive residential yard trimmings from the rest of the city collected by the Department of Public Works.

A number of other tourist- and business-traveler-geared locations have also ushered in waste diversion programs. Perhaps most notable are the Georgia World Congress Center and the Georgia Dome. In 2013, a combined 2.3 million people visited these two facilities. The Georgia World Congress Center Authority, which operates both facilities, diverted 752 tons from the two venues in fiscal year 2015, including 285 tons of organics sent to a compost facility and 7 tons of food donated. The Authority has a goal to increase its waste diversion by 10 percent in fiscal year 2016. 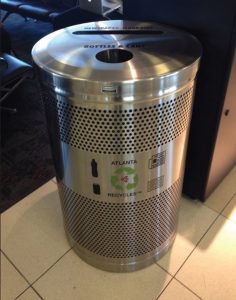 Public-space initiatives also hold potential in other realms. With relatively moderate temperatures most of the year, Atlanta is the site of many outdoor fairs, festivals and concerts. The City requires the owner of any property where an outdoor event is held to provide a recycling container next to every trashcan, and the recycling receptacle must accept aluminum, glass, and PET and HDPE containers. Furthermore, if the property is owned by the city, the permit holder for the event must provide recycling containers (which can be borrowed from the city for a deposit) as well as collection and processing of the commodities listed above.

Atlanta has long been defined by its business-oriented environment, so to garner support for recycling, it makes sense to demonstrate the ways the recycling industry contributes to the city’s economy. A 2015 report issued by the Institute for Scrap Recycling Industries indicated 1,754 jobs were generated by scrap processors and brokers in Atlanta and the businesses that support them. These businesses alone, excluding collectors and end users of recovered material, had an economic impact of over $400 million in 2015, according to the report.

The expanded recycling in Atlanta has required real dedication and investment on the part of city government. In addition to new recycling carts and collection vehicles, the city has increased the number of recycling staff multi-fold and now has a full-time zero waste manager working in the mayor’s Office of Sustainability. Also, to foster communication and collaboration on materials diversion initiatives, a group called Atlanta Recycles has been established. The coalition of governmental, corporate and environmental entities has a mission “to promote Atlanta as a national leader in environmentally responsible living by fostering a culture of sustainable practices through resource conservation, recovery, and recycling.” Meeting monthly, the members of the coalition’s steering committee coordinate and support one another’s ideas and actions.

With immense environmental challenges facing cities across the globe, it’s clear that large population centers need to make dedicated efforts to move the needle on sustainability. Atlanta has laid out its hopes in this area. Landfill diversion across all generator types is one key way the city is rising toward its goals.

Abby Goldsmith and Boyd Leake are the co-chairs of the Atlanta Recycles Steering Committee. Goldsmith is the principal and owner of A. Goldsmith Resources LLC and can be contacted at [email protected]