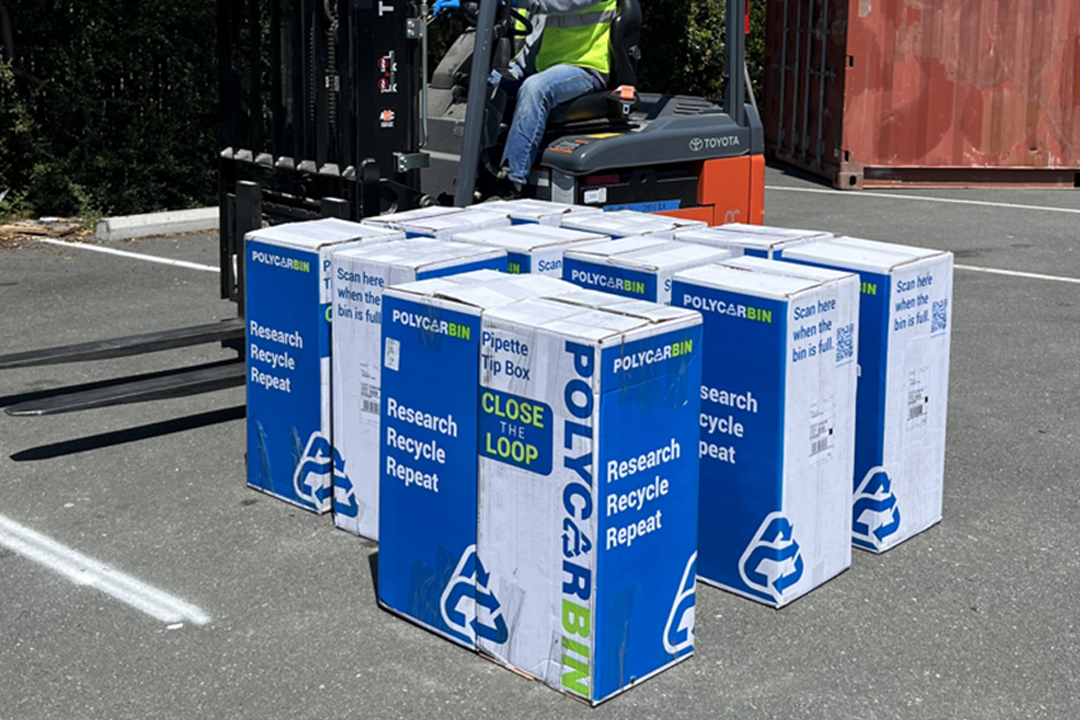 Polycarbin partners with area recyclers to process collected lab plastics, then Polycarbin brings the recycled plastic to several different contract manufacturers that mold it into lab products. | Courtesy of Polycarbin

The co-founders of Polycarbin met in medical school, on track to become plastic surgeons. That’s a point of irony now, they said, as their lab plastics recycling business continues to grow.

Noah Pyles, co-founder and chief operating officer, said he and James O’Brien, co-founder and CEO, wanted to create a way to close the loop on lab plastics after they met at the University of Pittsburgh. Polycarbin was their answer.

Headquartered on the West Coast, the company collects lab plastics from the San Francisco Bay Area, Southern California, New England and parts of the mid-Atlantic region, then recycles that plastic back into laboratory products. The company is handling between 40,000 and 80,000 pounds of material a month.

“One of the key missions of our company is setting a new precedent for producer responsibility,” Pyles told Plastics Recycling Update. “I want scientists to know that Polycarbin is committed to bringing them sustainable products and then taking them on the back end and ensuring that they end up in the most sustainable destination possible.”

After collecting the plastic, Polycarbin partners with area recyclers to process the material, then Polycarbin brings the recycled plastic to several different contract manufacturers that mold it into lab products.

The company also strives for transparency, Pyles said, because many people “want to feel like we’re doing the right thing and we trust that when we recycle something it’s going someplace responsible, and we’ve found for decades now that a lot of the time it isn’t.”

Pyles said when he and O’Brien met in medical school, they had about 15 combined years of prior lab research experience. Pyles had been a research technician at Johns Hopkins School of Medicine, and O’Brien a research fellow at the Massachusetts Institute of Technology’s Koch Institute for Integrative Cancer Research before attending the University of Pittsburgh. They started calculating how much plastic they had produced in their time working in the labs.

“Back when I was at Hopkins we used to measure our productivity and our efforts by the stacks of [quantitative polymerase chain reaction] plates we’d pile up on the table. Looking back on it, it’s like wow, that was actually just 10 pounds of waste, pure plastic waste that ultimately was incinerated or buried underground,” Pyles said.

“So we decided that we’d try to build that infrastructure, locally at first, and then as we grew we kind of realized that this is a systemic problem that manifests as billions of pounds of plastic waste ultimately burned or buried every year,” he added.

The company was incorporated in 2020, but Pyles said by late 2019 the pair had committed themselves to the idea. They worked with the University of Pittsburgh’s Vascular Medicine Institute to test their recycling system, building recycling boxes in a friend’s garage and putting them in labs. The pair found they could get a clean enough plastic stream from labs to make processing feasible.

“Once we had that information, we were kind of like okay, the scientific community wants this, they deserve this, and so we’re going to try to build it for them,” Pyles said.

Polycarbin’s business model seeks to both save labs money on the disposal side, because many labs pay a high price to dispose of lab materials, and then to use that plastic to create affordable, sustainable products for labs to purchase, Pyles said.

“We view it as the responsibility of our company to take full responsibility for every piece of material that goes into products we produce,” Pyles said. “We view ourselves as stewards of this plastic and we don’t produce anything we cannot recycle ourselves.” 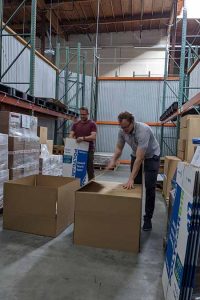 Polycarbin offers a range of products, and Pyles said they are in the testing phases to add more. They take mixed-color polypropylene and make it into a black pipette tip box, and use clear polypropylene to make centrifuge tubes in both 50 milliliter and 15 milliliter sizes. He said they’re looking to use the clear PP for well plates and pipette tips in the near future.

“The quality of polypropylene coming from these laboratories is so high you can extract that in a pretty pure sense and put it right back into products,” Pyles said.

Polycarbin prices the new products competitively, Pyles said, and so far “we have been able to meet nearly all of our customers where they are.”

“We don’t view a green premium as something that is good for the mission of the company,” he said. “We want to ultimately supplant as much virgin material in the market as possible because that creates a more sustainable supply chain.”

Pyles said the company is “having a lot of luck and a lot of traction selling these products to the same communities that are ultimately giving us this plastic,” but not all labs that want to recycle are interested in buying the recycled products.

“We have honestly been trying to keep up with demand for recycling services while at the same time promoting the sustainable procurement end,” Pyles said. “We like to communicate to our customers that in order to actually be part of the circular economy you have to be committed to buying products that are made sustainably.”

That’s vital, because Pyles said almost half of the indirect emissions associated with a laboratory come from the consumables labs are “buying on a daily basis in enormous quantities.”

Looking forward, Pyles said he and O’Brien want to bring the company international. They’re also a couple months away from launching a collection and reuse system for polystyrene, making it into petri dishes.

They’re also looking to get their carbon emission tracking system third-party certified, and Pyles said that should be possible after their next round of fundraising. The company recently raised $2 million in a seed round of funding. Polycarbin wants to share that certification data with customers, he said.

“We can share it with our customers and make it available to anyone who wants to audit it because we believe in a future where if you play with all your cards facing up, you stand to at least set a new bar for the expectation of the customer,” Pyles said.