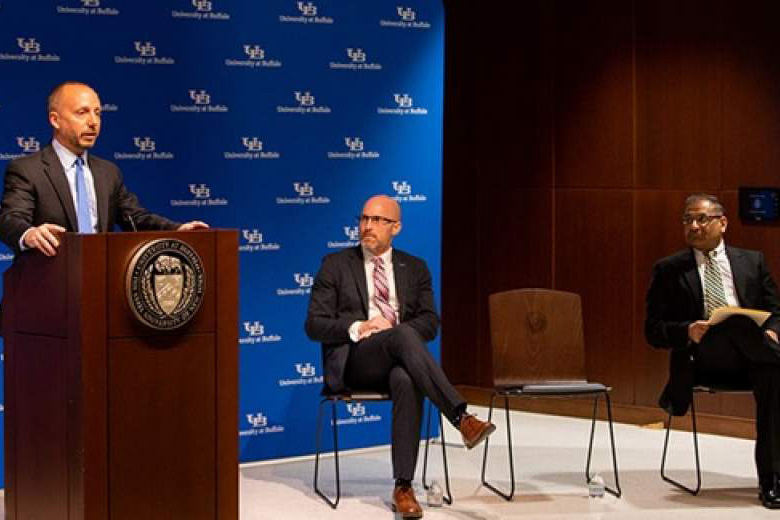 The state of New York will direct millions of dollars toward plastics recycling research at the University at Buffalo. | Credit: Meredith Forrest Kulwicki

The award, from the Department of Environmental Conservation (DEC), will support the New York State Center for Plastic Recycling Research and Innovation and expand on the current partnership between the two entities, a press release said.

In the release, DEC Commissioner Basil Seggos said the initial partnership “has been so successful that several companies and other academic institutions have reached out to the university about the plastics recycling research underway.”

The new funding comes after the state gave the University at Buffalo a $1.9 million grant for its RENEW Institute in 2020.

The York State Center for Plastic Recycling Research and Innovation will host a multidisciplinary team of university researchers and scientists, recycling industry experts and DEC employees. They will integrate social sciences, economics, communication, engineering, and plastics and materials science to address plastic recycling and pollution.

According to the press release, areas of focus will be how to develop secondary recyclable markets to ease the burden on municipal recycling programs, best practices for streamlining recycling, mapping the reverse supply chain for plastics in New York and conducting a “deep dive” into the structure of the collection, disposal and recycling industries.

The center will also try to improve efficiency in collecting and processing plastics; research plastics in natural environments, agriculture, food and medical industries; study what the public knowledge of and attitude toward recycling is; and improve high-speed plastic sorting via imaging technologies.

The funding is from the state Environmental Protection Fund (EPF), which Gov. Kathy Hochul increased from $300 million to $400 million in the 2022-23 state budget. That’s the highest-ever level of funding in the program’s history, the press release said.

Amit Goyal, a professor in the University at Buffalo’s Department of Chemical and Biological Engineering, will be the center director. Goyal said investments such as this one “will ensure that New York State plays a leadership role to develop innovative strategies for plastics recycling and help make recycling initiatives more effective” and that the University at Buffalo’s team was “uniquely positioned” to develop solutions for plastics recycling.

“We are excited to expand on our current project with the DEC on assessing and improving plastic recycling as well as developing outreach and educational programs,” he said.