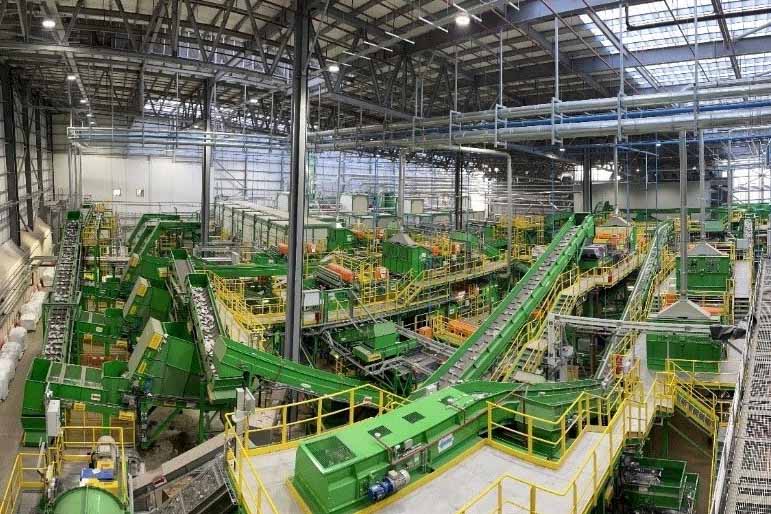 Two large, new facilities in Europe will be able to process a combined total of over 200,000 tons of plastic scrap using high-tech equipment. The following are more details on the PreZero and Viridor facilities.

PreZero sorts by color and material in Germany

“The new facility is the most advanced light packaging sorting plant in Europe, capable of sorting the packaging fractions by color and, very importantly, even filter black plastics,” a press release said. “This results in extremely high-quality output that can be recycled into new products.”

It has an annual throughput of about 120,000 tons and can take light packaging made of aluminum, composites with aluminum content, film PE, PP, PS/EPS, PET, PVC, cartons, paper and cardboard, the press release said. The result is 18 different output fractions, all separated by material and color.

Wolfgang Köser, joint project manager, said it was the largest project to date for STADLER.

In addition to the 38 near-infrared sorters, the facility also has ballistic separators, robot-assisted secondary sorting and 272 conveyor belts on five levels, supported by over 1,000 tons of steel.

“The continuous level concept facilitates the operation of the system and ensures good accessibility to all the equipment for cleaning and maintenance,” Köser said.

The plant also has a fully automated bunker management, freeing staff members up from the baler, the press release said.

“The desired bale weights – and consequently bale lengths – can be achieved according to the customer’s specifications through the weighing cells under all bunkers,” joint project manager Benny Kalmbach said. “This has the advantage that the trucks can be loaded optimally for the best possible transport result.”

After taking a year to build, the plant’s ramp-up is on schedule, the press release said.

U.K.-based Viridor used AMUT technology in its new polymer recycling facility, which is co-located with and powered by the company’s energy-recovery facility.

The plant, based in Avonmouth, England, is the largest multi-polymer recycling plant in the U.K., according to a press release.

AMUT’s ECOTECH division designed and developed a custom-engineered plastic recovery system, which they integrated into a high-efficiency washing plant. It uses less fresh water than other washing systems, the press release said, and overall the system also reduced energy consumption and chemical use.

The turn-key plant will process 90,000 tons of plastic scrap per year, turning PET, HDPE and PP scrap into flakes and granules that will be sold for use in food packaging and other commercial products, the press release said.