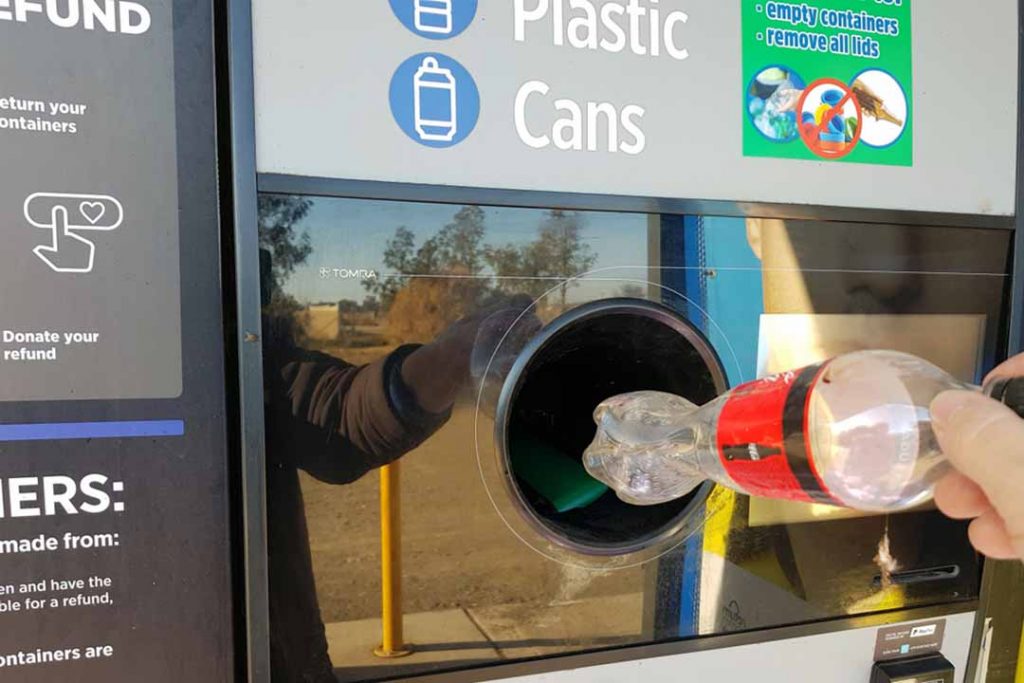 Many in the U.S. may be unfamiliar with reverse vending machines, because only 10 of 50 states have deposit redemption programs. | Karen McFarland/Shutterstock

We’ve read the statistics, over and over.

“Since the 1950s, some 8.3 billion tons of plastic have been produced worldwide, and to date, only 9% of that has been recycled,” The Guardian has noted.

“Just 8% of plastic waste in the United States is sorted for recycling,” the Break Free from Plastic Pollution Act points out.

No argument here – these percentages are low. China’s 2018 National Sword policy, with its ban on imports of most plastics and other materials, added to a crisis in U.S. recycling, and the COVID-19 pandemic, which saw many recyclers concerned over health and safety temporarily suspend service, hasn’t helped.

A report by the Ellen MacArthur Foundation, which promotes a circular economy that reduces waste and keeps products in use, estimates that by 2050, there could be more plastic than fish in the world’s oceans.

Yes, the picture is bleak. Recycling rates must improve. But some of the rhetoric has gotten out of hand. More to the point: We have got to stop minimizing the contribution that recycling makes.

A line from the film “The Story of Plastic” goes: “We cannot recycle our way out of this mess.” We believe this insinuates that recycling serves no purpose and it could take the pressure off personal responsibility. Yes, there are those calling for an end to all single-use plastic products. But we need to champion today’s recycling efforts and start saying things like “let’s do better,” instead of rhetorically draining a critical tool of its value.

We also need to make recycling easier and more attractive for the consumer, particularly in the COVID-19 era, and there is a way we can do this that may not be familiar to many Americans: reverse vending machines (RVMs).

RVMs accept PET bottles for recycling and give consumers a refund or their container deposit. Found around the world, they’re an automated way to collect, sort and handle the return of used drink containers. They’ve been around for decades and are typically installed in regions with robust container deposit laws, but many Americans don’t know about RVMs because only 10 of our states have such laws.

But we don’t need legislation. RVMs could be paid for and maintained by beverage companies, who would then offer consumers discount coupons on their various products (not just beverages) inside the very store where the shoppers just recycled their containers. These coupons would have to offer a discount large enough to incentivize RVM use, but that’s the idea: RVMs should sit outside of every superstore and big supermarket in the country, making it easy for and incentivizing consumers to recycle.

I promise you, with that kind of ubiquity, recycling and collection rates would increase.

Why would beverage makers want to voluntarily create a takeback system, without regulation? Because it would help them ensure the supply of material they need to meet their PCR goals. Getting ahead of any legislation, rather than waiting for it, is beneficial as well.

The first RVMs appeared in the 1970s, but, like all things automated, they’ve come a long way since. They are clean and sleek, with high-definition interfaces, and can be linked through an app to an account such as PayPal for payment or allow the user to donate their refund to a charity.

Established equipment providers are working hard to develop the technology further. Tomra, the world’s largest RVM maker, plans to introduce RVMs that can accept 100 beverage containers at a time in various markets in the months ahead. The idea is to avoid waiting in line while others return one bottle at a time. For an idea of how easy these machines make the recycling process for consumers, just search “Tomra RVM” on YouTube.

As we tackle the pandemic as well as climate change, this news couldn’t come at a better time. RVMs require no human contact. And, by helping to increase recycling rates, we can make more new bottles from old bottles, cutting our collective carbon footprint and protecting our oceans and waterways from the scourge of plastic pollution.

RVMs can make this as easy as grocery shopping. Let’s make it a reality.

Leon Farahnik is CEO of CarbonLITE Recycling, the world’s largest recycler of plastic beverage bottles, with plants in California, Texas and Pennsylvania.