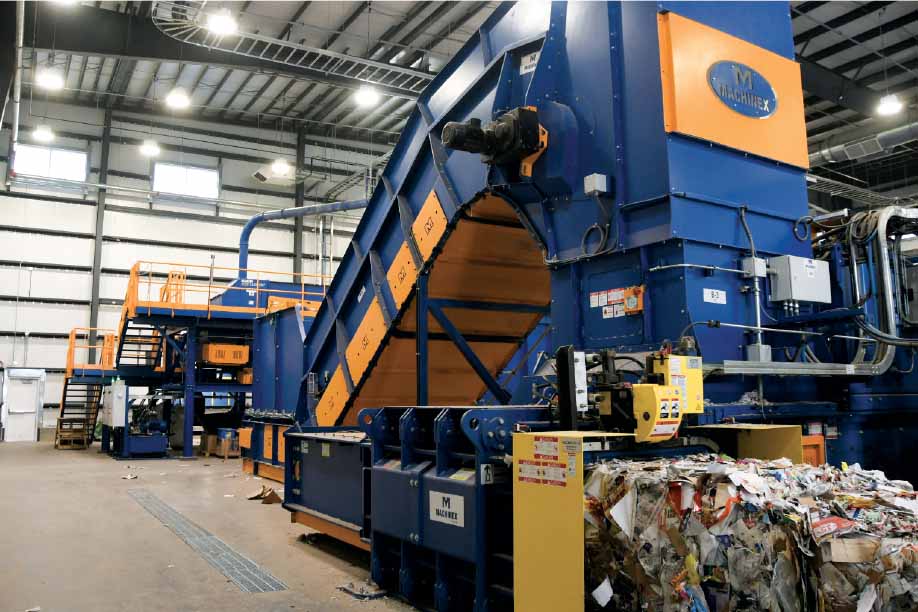 The Lethbridge MRF sorts and bales recyclables from 30,000 single-family houses and over 2,500 multi-family units.

A municipal materials recovery facility in Canada’s Alberta province was built with future growth in mind. And plastics recovery is a clear part of the equation.

Opened last year, the single-stream facility was designed to sort up to 8 metric tons per hour. The operation was built with the understanding it would initially use only about half of the capacity and handle more tons over time, said Mandi Parker, corporate sustainability manager for the city of Lethbridge.

Lethbridge has a population of around 93,000.

Lethbridge’s multi-family housing sector could help drive that future volume growth, in addition to growing commercial volumes and material from neighboring cities. The MRF sorts and bales recyclables from 30,000 single-family houses and over 2,500 multi-family units. But Lethbridge, which is located in southern Alberta, has another 4,000 apartment and condo units that aren’t yet served.

The 46,235-square-foot recycling facility sits close to Old Man River and was commissioned on March 25, 2019. A grand opening ceremony attended by local fourth- and fifth-grade students was held May 8. Less than a week later, the first curbside load arrived. The MRF’s opening coincided with the launch of the citywide curbside recycling collection program.

Nearly 90% of the city-owned facility’s square footage is devoted to equipment, most of which was supplied by Quebec-based recycling equipment company Machinex. The remainder includes the office, loading dock and service platform. The MRF cost about $7 million Canadian (around $5.2 million U.S.).

The main processing line is made up of over a dozen pieces of equipment, all supplied by Machinex except for the magnet and wire-tie system. 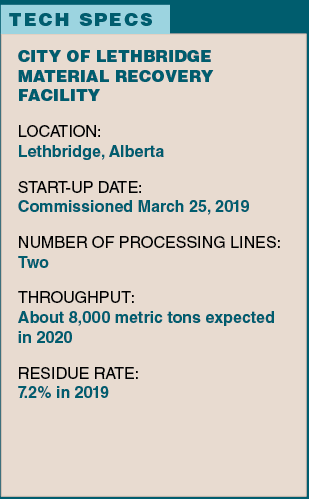 First, a back feeder drum feeds material into the system at a steady rate using a drum with teeth rotating over a flat pan steel belt. A chain roller conveyor then carries material to a climate-controlled presort area (daytime temperatures can stay near freezing in the winter and get up to 80 degrees Fahrenheit in the summer in Lethbridge).

After presort, material heads into a series of disc screens, including a MACH OCC separator, fines screen, and a Mach separator, which uses three adjustable decks to provide the primary 2D/3D separation. Then, the final separation between fiber and containers is done by a ballistic separator, which uses metal slats with openings mounted on eccentric bearings.

From there, a Steinert magnet removes ferrous metals and an eddy-current separator ejects aluminum. A blower system conveys the non-ferrous metals from the eddy current to the product bunker.

For residue, the MRF uses two compactors to compress the fraction in 40-cubic-yard bins prior to disposal at a landfill. The facility’s residue rate was 7.2% in 2019.

The MRF also has a direct-to-bale line for OCC, SRPN and mixed paper, among other materials.

One of the facility’s main challenges is plastic bag contamination. Bags are removed in presort, but the MRF hasn’t found a viable market for the material, Parker said. “We are also getting lots of fiber with the inbound stream and some of this carries over to the container line, where it can make recovering some of the more valuable items challenging at higher throughput rates,” she said.

The City of Lethbridge Material Recovery Facility employs 18 staff on one shift Monday-Friday.