American recycling professionals might be surprised to learn that container deposit laws are experiencing explosive growth around the world.

While most U.S. programs are suffering from acute neglect – resulting in closures of more than 1,300 redemption centers in California, for instance, and backsliding redemption rates in other states – outside the U.S., the numbers tell a different story. In January 2017, nearly 300 million people worldwide had access to deposit laws. Since then, 15 new programs have been announced in quick succession, with the largest in India, Turkey, the United Kingdom and Romania.

Data analysis by the Container Recycling Institute shows that by the time all of these programs are implemented over the next two years, they will cover another 313 million people, more than doubling the number of individuals covered from just two years ago.

Furthermore, thanks to the passage of the Single-Use Plastics Directive in the European Union and circular economy commitments from global brands, deposit programs almost certainly will grow to reach significantly more people in the EU over the next decade. With programs also under consideration elsewhere, it’s reasonable to predict worldwide coverage of at least 1 billion people by 2030. 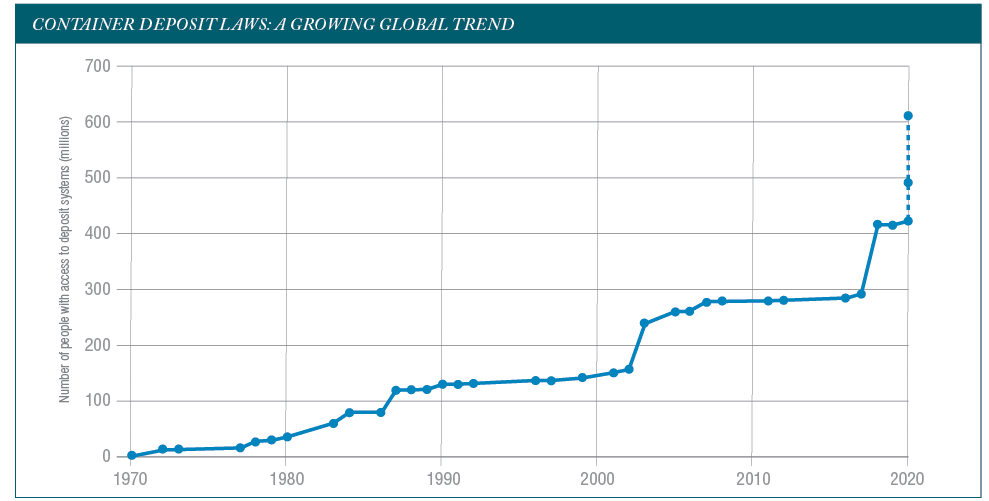 After decades of steady growth since 1970, use of container deposit laws across the globe is now expanding rapidly. With new programs coming on-line, in two years these laws will cover 613 million people worldwide – double the number of people covered in 2017.
© Container Recycling Institute, 2019

Why the focus on deposit laws? Simply put, these programs typically result in beverage container recycling rates that are two to three times higher than the rates of other recycling programs, especially if the deposit is set at a meaningful level. And deposits reduce beverage container litter by producing a financial incentive to not litter in the first place.

In 2018, Australia’s national science agency, CSIRO, released a study that evaluated the effectiveness of container deposit laws when it comes to litter reduction on Australian and U.S. coasts. CSIRO noted: “The proportion of containers found in coastal debris surveys in states with [deposit laws] was approximately 40% lower than in states without [the laws]. … These results provide strong evidence that fewer beverage containers end up as mismanaged coastal waste in states that provide a cash refund for returned beverage containers.”

Given that deposits offer a proven method of capturing beverage containers for recycling, governments worldwide are increasingly turning to these programs (also referred to as deposit return schemes in many nations or “bottle bills” in the U.S.) to reduce litter and marine debris, cut down energy use, avoid greenhouse gas emissions, lower waste collection and landfilling costs, and provide financial resources for organizations and individuals.

Most recently, the impetus for the global surge in deposit laws can be traced largely to increased awareness of marine plastic pollution – as CSIRO’s study showed, deposit systems can reduce such pollution significantly.

Campaigns such as Sky Ocean Rescue’s 2017 “Plasticus” tour in the U.K. (showcasing a 10-meter whale made out of the amount of plastic that enters the ocean each second) helped to further bring the marine litter issue to the forefront. In addition, David Attenborough’s “Blue Planet II” – the U.K.’s most watched TV show in 2017 – included a highly impactful episode on plastic pollution in our oceans, leading to a public outcry to reduce plastic packaging waste.

As U.K. Environment Secretary Michael Gove said in 2018: “We can be in no doubt that plastic is wreaking havoc on our marine environment – killing dolphins, choking turtles and degrading our most precious habitats. It is absolutely vital we act now to tackle this threat.”

To understand the trajectory of deposit legislation, let’s go back to the beginning.

In the 1950s and 60s, refillable “deposit” bottles were replaced by throwaway, no-deposit beverage containers that created litter and wasted resources.

In response to the growing epidemic of roadside trash, the world’s first deposit law was passed in 1970 in the Canadian province of British Columbia. Called the Litter Act, it became the first mandatory refund system for soft drink and beer containers, and it introduced the world to extended producer responsibility, a concept in which product manufacturers are mandated to help fund or manage recovery of the goods they put on the market. 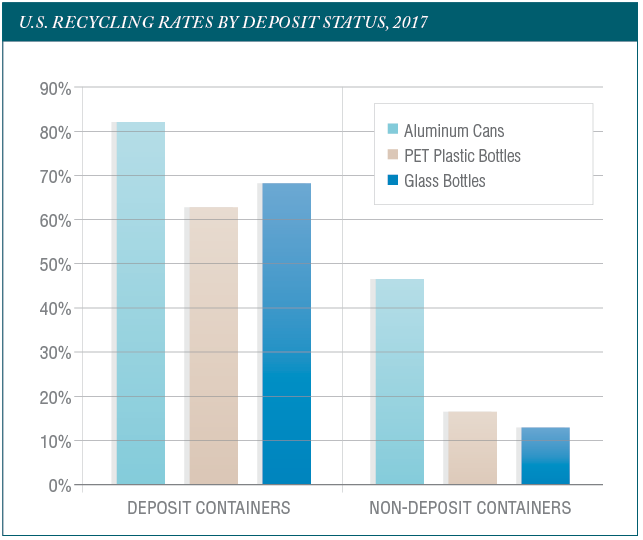 Over the following two decades, similar laws passed in 10 U.S. states. Hawaii became the 11th bottle bill state in 2005, but in 2010, Delaware’s bottle bill was repealed, bringing the total back down to 10. Currently, around 90 million people in the U.S. have access to a container deposit system, according to analysis from the Container Recycling Institute.

Meanwhile, eight of Canada’s 13 provinces and territories passed deposit laws between 1970 and 1996, and two more followed by 2007. Eight countries in the EU had implemented deposit systems by 2010.

In Australia, early-mover South Australia enacted the world’s fifth container deposit law in 1975, but it took 36 years before another Aussie jurisdiction followed suit (the Northern Territory, in 2011). However, the rest of the nation moved quickly after that, and today Victoria is the only Australian region without an approved deposit law – meaning that more than 16.1 million Australians, or 70% of the country’s population, are or soon will be covered by these programs.

Other countries around the world, like Israel and the island nations of Barbados, Palau, Kiribati and Micronesia, have had deposit laws in place for more than a decade. In addition, the governments of Cyprus, Hong Kong and Belarus have announced that they are studying deposit implementation.

Looking ahead in both EU and U.S.

The European Union is moving forward with several bold new waste reduction measures, including the Single-Use Plastics Directive that passed in May 2019. The directive requires EU member states to collect 90% of beverage bottles by 2029, with an interim target of 77% by 2025. This ambitious requirement will almost certainly necessitate that each member state adopt a deposit law – with very few exceptions, there is no other way to achieve a 90% recycling rate for containers.

Today, there are 17 EU/EFTA (European Free Trade Association) countries that already have a deposit law and 15 that do not (see chart below). The remaining countries without a law have a combined population of 276 million people. Assuming those governments pass laws to meet the EU’s rules, their populations will add considerably to the current global total of 613 million people covered by deposit programs. If a few other governments around the world that are assessing CDLs proceed with enactment, coverage would expand to roughly another 18 million people. 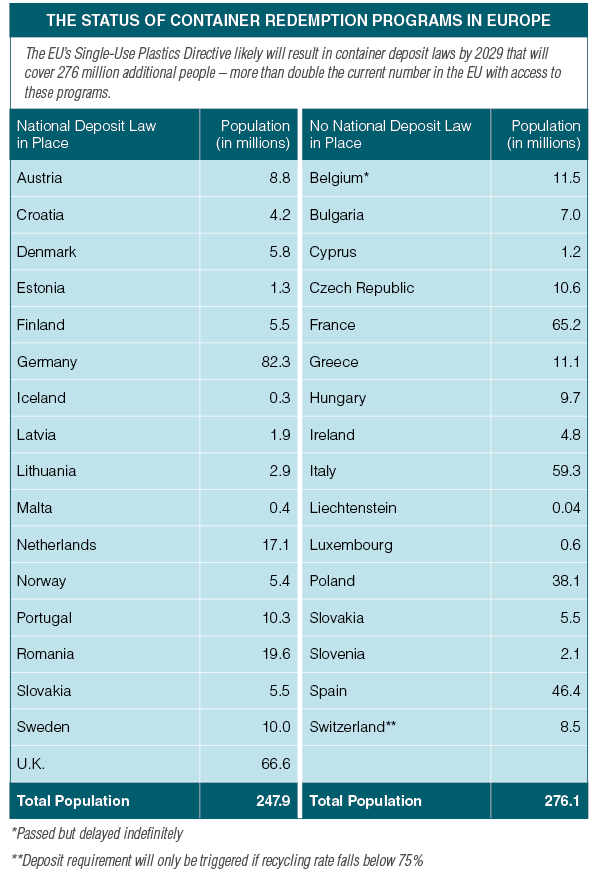 The future of deposit adoption in the U.S., however, is a little less clear.

While no new bottle bills have been passed in 15 years, 2019 did show an uptick in interest in states without deposits. Legislators from nine U.S. states introduced a bill for a new deposit law last year (see sidebar). That represents a change from most previous years, when on average only two to four states would see legislation introduced.

Furthermore, in 2019, discussion began around the possibility of a national bottle bill in the U.S., thanks to action from two members of Congress. Sen. Tom Udall, D-N.M., and Rep. Alan Lowenthal, D-Calif., in July floated an outline for legislation they said they plan to introduce, and it includes national extended producer responsibility for plastic packaging, minimum recycled-content mandates for certain materials, a nationwide container deposit and more. As of this writing, the bill has yet to be introduced to Congress, but the move from those national lawmakers illustrates the rising call for recycling improvement among the U.S. population. 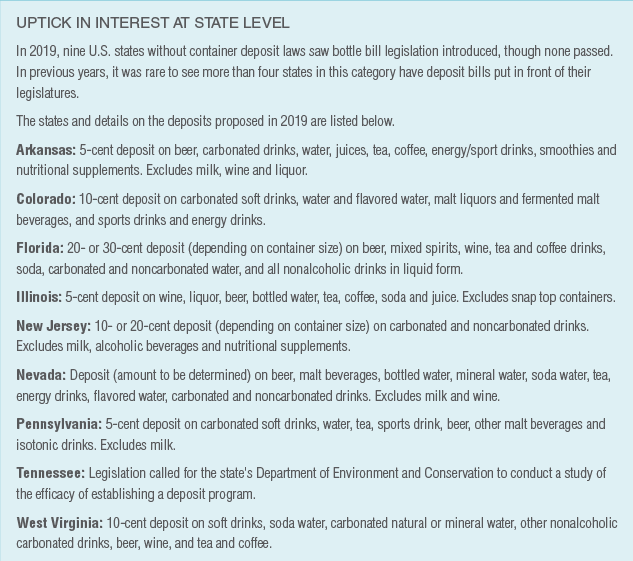 The impact of brand commitments

Over the past two years, a number of international brands, including Coca-Cola, Ikea, PepsiCo, Unilever and Walmart set plastic reduction goals with deadlines as early as 2020 or 2025. The most ambitious came from Coca-Cola, whose “World Without Waste” campaign proposes to “collect and recycle the equivalent of every bottle or can” it sells globally by 2030, as well as increase to 50% its use of recycled PET in plastic bottles.

Sounds great, but what’s the game plan to hit those objectives? In 2017, the PET recycling rate in the U.S. was just 29.2%, and recycled plastic content nationally averages just 7% in PET food and beverage bottles (that 7% number was derived via analysis based on data in the latest PET recycling report from the Association of Plastic Recyclers and the National Association for PET Container Resources).

Clearly, more recycled material needs to get into the pipeline for product makers to hit their targets. In October of 2019, Coca-Cola, Dr Pepper Keurig and PepsiCo pledged $100 million through an initiative called “Every Bottle Back” that strives to improve the North American recycling infrastructure. That’s a good start and laudable effort, but if powerful brands truly are committed to a waste-free world, they will get behind a variety of proven policies, including deposit laws.

In order to recover containers at a rate that will enable these corporations to meet their stated targets – and reduce plastic pollution – we need the political will to enact several important changes for deposit frameworks.

First up is modernization of existing programs with state-of-the-art and consumer-pleasing technology. In Canada’s Alberta province, redemption centers use machines that count dozens of containers per minute – officials have a goal of no customer waiting more than six minutes in line at redemption centers. And in Oregon, the system keeps getting reinvented year after year as technology changes (more on this below). This type of work is needed in all deposit systems.

Second, more coverage is going to be required to supply the raw materials that beverage companies say they require, which should be accomplished through both expansion of existing laws to cover all relevant beverage types, and establishment of deposit systems in jurisdictions without them.

The third improvement needed is simplification of the legal structure of existing programs, using best-in-class concepts from around the world.

Several U.S. states haven’t updated their deposit frameworks in decades, ignoring technological advances, more current operational procedures and, in recent years, stagnating handling fees and shortfalls in supplementary state processing payments to redemption centers. In addition, laws in four states only cover carbonated beverages, as though bottled water, sports drinks and energy drinks were never invented. Due to these factors, redemption rates in several states have fallen by about 10 percentage points in the last five years.

It’s also important to note that the container deposit value of 5 cents, used in most states, is clearly too low in 2020, as what was worth a nickel in the 1970s is worth just a penny today. Deposits must rise to at least 10 cents to achieve sustainable recycling rates.

We have the model on how to improve deposit systems. In the last few years, Oregon has taken several steps to expand and modernize its law into a world-class program by:

Coordinating to produce benefits for all

As nations around the globe continue to introduce deposit legislation, it’s more important than ever for industry, government agencies and other stakeholders in the U.S. to work together to maximize the financial, environmental and societal benefits of the most effective recycling system available.

We can make this happen.

Susan Collins is president of the Container Recycling Institute (CRI), a leading authority on the economic and environmental impacts of used beverage containers and other consumer product packaging. Its mission is to make North America a global model for the collection and quality recycling of packaging materials. She can be contacted at [email protected] And more information is available at container-recycling.org.