California’s ban on single-use plastic bags, which became effective in November 2016, is currently the only statewide ban in place in the nation.

This article will report on the details of California’s legislation banning single-use plastic bags, which also includes restrictions on other types of shopping bags, along with an update on its implementation.

California initially passed the statewide ban on plastic bags in September 2014 when then-Gov. Jerry Brown Jr. signed Senate Bill 270 into law. The legislation prohibited most grocery stores and pharmacies from distributing single-use plastic bags after July 2015, expanded the ban to convenience stores and liquor stores in July 2016, and directed certain retail outlets to charge a minimum of 10 cents for recycled paper bags and reusable grocery bags.

However, before the law was scheduled to go into effect, it was put on hold when a measure to repeal the ban qualified for the ballot. The American Progressive Bag Alliance (APBA) submitted more than 800,000 signatures by the December 2014 deadline in support of a referendum on the law. With at least 555,236 of the signatures determined to be valid, the California Secretary of State announced in February 2015 that the referendum qualified for the November 2016 ballot.

However, in that 2016 vote, California voters backed the ban, and the legislation became effective immediately.

Enactment of SB 270 resulted in the addition of Chapter 5.3 (commencing with Section 42280) to Part 3 of Division 30 of California’s Public Resource Code.

Under the law, most grocery stores, retail stores with a pharmacy, convenience stores, food marts, and liquor stores may not provide single-use plastic carryout bags to their customers. The law does allow these retail establishments to provide customers with a certified reusable grocery bag or recycled paper bag at the point of sale for a charge of at least 10 cents.

Reusable grocery bags must be produced by a certified manufacturer and may not contain lead, cadmium or any other toxic material. Importantly, SB 270 states that, to demonstrate compliance with this safety requirement, reusable bag manufacturers may obtain a so-called “No Objection Letter” from the U.S. Food and Drug Administration, a review process that can take the agency some months to complete.

Each reusable bag also is required to:

Further requirements exist for reusable grocery bags made from plastic film, including specifications on the minimum amount of post-consumer recycled material that must be used to manufacture the bags.

In addition, the reusable plastic film products must be capable of carrying 22 pounds over a distance of 175 feet for a minimum of 125 uses and be at least 2.25 mils thick (1 mil is one one-thousandth of an inch). Labeling requirements for reusable grocery bags made from plastic film are also specified.

Further, reusable grocery bags made from plastic film that are compostable must meet ASTM International Standard D6400 for compostable plastics. 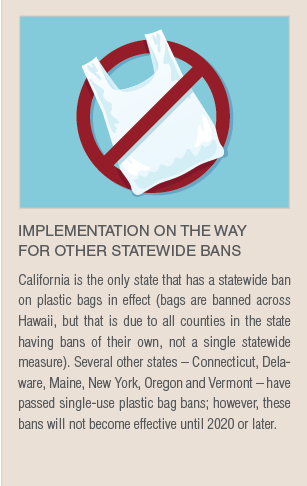 Third-party certification applications can be submitted through the Reusable Grocery Bag Reporting System (RGBRS). Once a proof of certification has been submitted, the name, location and contact information of the reusable grocery bag producer, along with specified bag information, will be published on a list of of Certified Reusable Grocery Bags and Producers (CRGBP).

CalRecycle was directed to establish a certification fee schedule to generate revenues sufficient to cover, but not exceed, the costs to implement and run the program. On April 16, 2019, CalRecycle approved a final draft of the regulations on the Administrative Certification for Reusable Grocery Bags. These regulations were approved on July 17, 2019 and became effective the same day (see California Code of Regulations, Title 14, Division 7, Chapter 4, Article 7, sections 17988.1- 17988.7).

The relatively swift publication came as a surprise to some in the industry, as the regulations imposed additional certification requirements that have been perceived as rather onerous.

The legislation also required CalRecycle to provide a report on the status of SB 270’s implementation. To comply with this requirement, on Feb. 25, 2019 CalRecycle published “SB 270: Report to the Legislature: Implementation Update and Policy Considerations for Management of Reusable Grocery Bags in California.”

The first recommendation is to clarify the definition of “store,” since it is currently not clear whether a store that primarily sells non-grocery items but also sell snacks is included the definition.

Suggestion number two is to resolve inconsistencies between SB 270 and the pre-existing statute for the At-Store Recycling Program governing the collection of reusable grocery bags for recycling.

Third, CalRecycle asks for guidance on what criteria should be used to determine whether reusable grocery bags made from plastic film are “recyclable in this state.”

Finally, the agency recommends confirming the number of bags that customers paying via the WIC Program or with electronic benefit transfer (EBT) cards may receive without charge, since some stores are only offering a single bag at no charge.

CalRecycle also recommended expanding the reporting requirements for stores and increasing the minimum fee for recycled paper and reusable plastic grocery bags. While stores currently are not required to provide data regarding bag usage, CalRecycle sent a letter requesting data on bag usage to 64 corporate offices, covering 6,565 stores statewide. Responses to the letter resulted in information on customer transaction from 1,405 stores.

During the first year of implementation, CalRecycle received more than 400 inquiries regarding the law. These included questions with respect to bag certification requirements, statutory definitions, and the role that FDA’s NOL process plays in confirming the safety of materials that are used to make reusable grocery bags.

Since many of the inquiries involved topics that were beyond CalRecycle’s statutory authority to interpret, the agency collaborated with the California attorney general’s office to develop a set of frequently asked questions to provide responses to stakeholder inquiries. Despite this clarity, a host of new questions have arisen due to the publication of the new certification regulations that came into effect in July.

Thus, while the mandate to ban single-use plastics bags has been clear, implementation of the ban has been much less straightforward.

Mitzi Ng Clark is a partner in Keller and Heckman LLP’s San Francisco office. Her practice encompasses a wide range of regulatory issues, including FDA pre-market clearance requirements for food and food-contact materials, local and state regulations concerning plastics and chemicals, and other manufacturing issues. She can be contacted at [email protected]