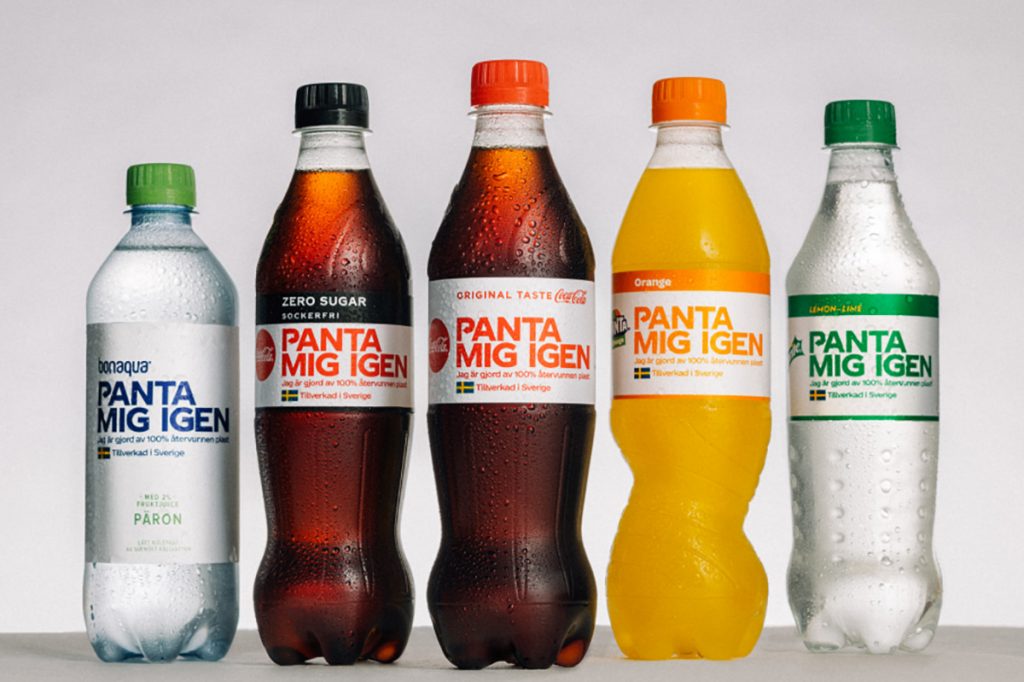 Coca-Cola Sweden says that about 205 million bottles per year are made from 100% recycled plastic and will carry the recycling labels. | Coca-Cola Sweden.

A Coca-Cola bottling firm is rolling out labels on certain PET bottles sold in Sweden that downplay the brand name in favor of prominent recycling messaging.

Coca-Cola European Partners, which bottles Coca-Cola products across Europe, this month announced changes to certain bottles distributed in Sweden. The bottles, which are made from 100% recycled plastic and produced locally in Sweden, will carry new recycling labels that “represent a radical departure from its standard international label design.”

Instead of featuring the well-recognized branding for Coca-Cola, Fanta, Spite and Bonaqua (flavored water), bottle labels will “become white, transformed from their signature colors” to clearly communicate a recycling message.

The messaging will note the following (in Swedish): “Recycle me again. I am made of 100% recycled plastic. Made in Sweden.”

Sofie Morsink Eliasson, general manager at Coca-Cola European Partners Sweden, said the move will help to increase the recycling rate across the country.

“We have a great deposit system in Sweden – where the majority of the bottles are collected – and today, 85% of all PET bottles are deposited and recycled,” she said in a statement. “The ambition of the initiative is to increase the level of recycled bottles still further towards our goal of 100% by 2025.”

According to Coca-Cola Sweden, about 205 million bottles per year are made from 100% recycled plastic and will carry the recycling labels.