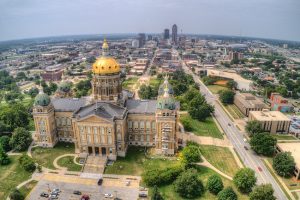 The Iowa Statehouse in Des Moines.

Lawmakers in Iowa and Tennessee recently passed legislation that eases regulation for gasification and pyrolysis facilities that handle recovered polymers.

The similar bills – SF 534 in Iowa and SB 923 in Tennessee – define gasification and pyrolysis as activities distinct from solid waste processing. The pieces of legislation in both states also categorize feedstocks for those processes separate from solid waste.

Such distinctions are important because they would allow operators that use those methods to be regulated more akin to manufacturers than solid waste facilities.

“Iowa and Tennessee become the most recent states to create a welcoming environment for businesses to convert more post-use plastics into valuable raw materials, thereby keeping more of our plastic resources out of landfills,” Craig Cookson, senior director of recycling and recovery at the American Chemistry Council’s Plastics Division, said in a statement.

The Iowa legislation, which had been opposed by the Iowa Recycling Association, passed the state Senate by a vote of 45-3 on March 13 and passed the House of Representatives by a vote of 90-6 on March 28. Iowa Gov. Kim Reynolds signed the bill into law on April 8.