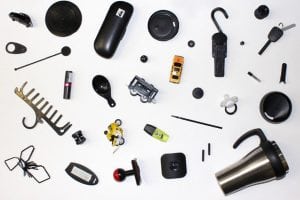 A sample of products containing bromine, as found by researchers.

A researcher has found black plastics from electronics are being recycled into a variety of household applications, despite still containing additives that he says could be hazardous.

Plastics from electronics are filling a demand by product manufacturers for black plastic, but research by Andrew Turner of the University of Plymouth in the U.K. shows ineffective sorting and processing causes additives in the material to carry over into new products.

E-plastics, such as ABS, HIPS and PC, contain additives to change their physical properties and alter performance. Brominated flame retardants (BFRs) are a common example of an additive in many e-plastics.

Although there is a demand for black plastic, recycling of the material “is hampered by the availability of suitable technology to sort this material efficiently,” Turner wrote in the study, titled “Black plastics: Linear and circular economies, hazardous additives and marine pollution.“

Legislation in Europe and some U.S. states focused on electronics recovery has contributed to this trend, because black plastic from e-scrap is often more readily recovered than black packaging plastic, according to the study.

But poor sorting of e-plastics means the additives contained within the plastic can carry through the recycling process. Turner described increasing instances of BFRs appearing in “a range of products where they are neither needed nor expected,” which presents “an unnecessary hazard to the consumer.” The study found BFRs in new items such as coffee cups, toys, kitchen utensils, glasses cases and jewelry.

“The reconstitution of (waste electrical and electronic equipment) into consumer products is a pervasive, global issue affecting plastics across a multitude of sectors and that is likely to have wide-ranging impacts on the environment and on human health,” Turner wrote.

A full solution is complicated, in part because of the dearth of information covering the path by which plastics containing potentially harmful additives are recycled. But Turner identified a stopgap measure that could be taken in the short term.

“Realistically, the most acceptable immediate objective would be a reduction in the impacts of hazardous additives through the recycling of black plastic into goods where human exposure is minimal,” Turner wrote, offering examples such as pallets, lumber, road signs and more.