The upward price trends for recovered PET and natural HDPE continues, according to the latest market data.

By contrast, the national average price of color HDPE continues to drop. It is now 14.25 cents per pound, down 22 percent from late April, when it reached a high of 18.19 cents per pound. This also represents a return to July 2017 levels, when this grade traded at 14.38 cents per pound. 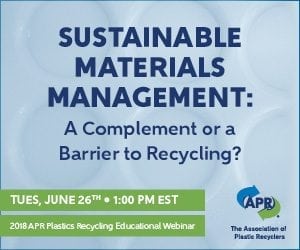