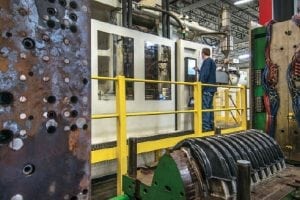 Water management is a solid end market for recycled plastics.

Among the largest buyers of recovered plastic in the country, Champion Polymer Recycling processes and feeds recycled plastic to its parent company, Infiltrator Water Technologies (IWT), which molds a variety of septic and stormwater treatment products.

There’s a sizeable appetite for the goods made of recycled PP, PE and PS. Millions of the IWT systems have been installed worldwide.

“Today, nearly half of the septic systems installed in North America use an Infiltrator Water Technologies product,” according to IWT. 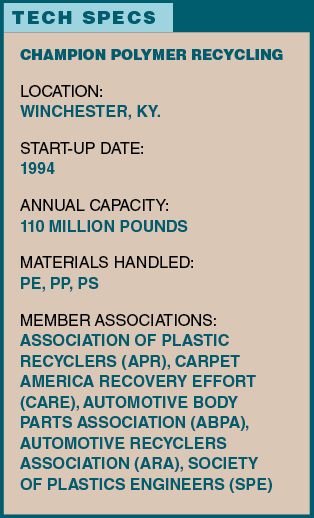 About three-quarters of the recovered plastic comes from post-industrial sources, and the remaining quarter is post-consumer plastic. The HDPE, LDPE, PP and PS is sourced from the automotive, building materials, beverage and bottling, food processing, grocery/baker and distribution center industries. The company’s processing technologies allow it to utilize plastic streams that are unusable to other companies, according to IWT.

The bead-marking equipment uses recycled polystyrene, which is melted and injected with gas and made into a small rod-shaped bead. The bead is heated and the entrapped gas expands, giving it a shape and size equivalent to a packing peanut. This bead is then assembled into a drain product called EZFlow.

Champion Polymer Recycling has roughly 650,000 square feet of processing and warehousing space in Winchester. IWT’s product manufacturing occurs in a total of 400,000 square feet spread across multiple states. All told, IWT has the capacity to process up to half a million pounds of plastic per day.

The end products are made from 95 percent recycled content, according to IWT.