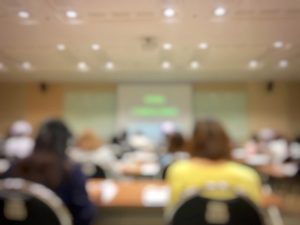 Many recycling associations are preparing for their biggest gatherings of the year, and three group leaders recently explained how China-related market disruptions will be tackled at their events.

Although 2013’s Green Fence campaign in China was a precursor to the current situation, for some groups, last summer’s announcement of a ban on certain recyclables flowing into China had a larger effect on the strategies of their organizations.

“This made a bigger impact in terms of how we really thought about the theme of the conference and how we thought about this year,” said Anne Piacentino, executive director of the Washington State Recycling Association (WSRA).

For associations in regions more insulated from export markets, China will still play a role in their conferences, but it will represent more of a reminder to push for action at the local level.

“We’ve gone through these market cycles before,” said Kerrin O’Brien, executive director of the Michigan Recycling Coalition (MRC). “This one, I think, is going to prove to be more significant, because it is an indicator that China may not be as significant a player in the future. And we will really need to – if we want to be successful – look at new opportunities.”

Marie Kruzan, executive director of the Association of New Jersey Recyclers (ANJR), agreed that the Chinese import restrictions seem as if they’ll be longer-lasting than earlier disruptions.

“With the Gulf War, you knew it would be over at some point in time, shipping containers would come back and you’d start moving material again,” Kruzan said. But with the current market change, “I don’t see this coming back to anywhere near the level it was before.”

The timing of China’s announcement last summer gave the WSRA time to start planning its programming accordingly. Piacentino said WSRA understood immediately that China’s decision was going to be a major issue for the industry, and therefore would be important to cover at the conference in May 2018.

WSRA found itself “not really knowing what was going to happen between then and May, but knowing this needs to be talked about whether the storm has passed or not,” she added.

The association has a conference committee that picks a theme each year for the annual gathering. Due to the massive change in the market since last summer, the group chose a theme around the idea of “navigating the waves of change.” That means that although there is a specific markets session, every other session is designed to tie into the National Sword impact and response, as well.

The conference will ask attendees whether the market changes have presented any opportunities, as well as surveying how the fallout has challenged the industry.

Piacentino said she thinks the doom and gloom stories of major negative impacts are well-known by now. The association held a policy forum during the fall to discuss some of the nuts and bolts of the new Chinese policies. With those bases covered, the upcoming forum’s discussions are geared more toward the hopeful side and where the industry is going.

“At our conference, we try to have content that really gets folks out of their day-to-day, to get the big picture,” she said.

ANJR is planning to have a session dedicated to markets and the National Sword fallout at its annual conference April 30.

Kruzan said key recycling stakeholders across New Jersey are also coming together before the conference in a separate meeting to brainstorm ideas for keeping the state’s recycling industry viable.

“Every step of the system needs to be there,” Kruzan said. “To do this right, there’s got to be a concerted effort.”

That means bringing in municipalities as well, explaining to them that MRF contractors can only do so much as long as material from residential programs continues with the same degree of contamination. Local governments also need to be forewarned that recycling contracts are not going to be the same as they were before, Kruzan said. “You’re going to be paying a great deal more than you were paying – a lot of contracts have been revised to say, ‘Every six months we’ll look at it again.'”

For New Jersey, the market change has come during a time of change in state politics. In recent years, the state’s recycling fund, much of which is available as grant money for municipalities, has been targeted as a source of funding for other governmental departments, Kruzan said. This year, the state has a new governor, Democrat Phil Murphy who replaced longtime Republican Gov. Chris Christie, and Kruzan’s hopeful the fund will be more secure against budget cuts.

The China fallout in New Jersey was delayed longer than some regions. The West Coast, Kruzan said, was highly dependent on exporting. A lot of the plastic collected in New Jersey has been shipped south to plants in the Carolinas and elsewhere in the Southeast. That initially shielded the Northeast from the impacts, until operators on the West Coast started sending material to those same processors in the South.

“California had no place to send it, so they were willing to ship it to them,” Kruzan said.

“If you’re desperate, you’ll take anything to move it out of the plant,” Kruzan said. “It was a business decision. The South plants could get it cheaper from California.”

Michigan has been insulated for a period of time against the market disruptions, but pricing impacts, in particular, have begun to hit the state.

“Things are slowing down here and Chinese officials have been on-site to verify that the material they do buy is high quality,” O’Brien said. But she noted that “it’s not as severe as what’s happening on the coasts.”

MRC is hosting its annual conference in mid-May, and although the China ban is not a central theme, it will certainly come up as a topic of discussion. O’Brien said MRC’s strategy is to push the message of market development and material quality.

“We know that it’s not going to get better on its own,” she said. “We need to pull ourselves up by our bootstraps and really develop that consistent quality and ample supply so manufacturers can make those choices.”

She said the conference will include emphasis on cleaning up the stream through public education and reducing contamination at the sorting level. It will also include brainstorming on how to boost local markets and attract to Michigan businesses that will use recyclables in manufacturing.

The market disruption comes as the state’s solid waste laws are being updated, O’Brien explained. The reforms seek to provide institutional oversight and enforcement of recycling programs, and potentially some funding.

“As that happens, there will be more requirements of these programs, but there will be a level of state leadership, involvement and funding that hasn’t been there before in a significant and ongoing way,” O’Brien said. “That will be good for Michigan in that we can all turn our attention to the important tasks at hand.”

The timing of the state attention toward recycling programs makes the current market downturn feel different than other downturns, O’Brien said, including the 2008 financial crash. “There wasn’t even hope on the horizon at that point,” she said. Now, she sees good things in the future of Michigan’s recycling industry.