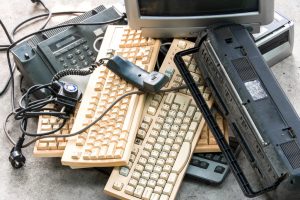 Researchers from the University of Illinois have developed a non-toxic method for recycling polycarbonate plastic, which is often used in electronics and other products but has been difficult to cost-effectively divert from the waste stream.

The researchers, Sriraam Chandrasekaran and B.K. Sharma, found that the solvent they chose can recover a clean stream of polycarbonate (PC) from e-plastics. It is particularly effective for plastics that contain just two polymers, such as PC and polyamide (PA).

The PC resin is known for durability and its ability to insulate electrical components. In addition to electronics, it is used regularly in construction and automotive applications.

The approach from Chandrasekaran and Sharma offers a non-toxic solution for recycling materials that have often been exported or sent to disposal. A select few North American facilities process e-plastics.

The research team hopes the solvent they studied, which is called N-methyl-2-pyrrolidone (NMP), can help make an impact quickly.

“The idea we had right from the beginning was commercialization,” said Chandrasekaran. “NMP is a commercially used solvent and it’s economically feasible as well.”

Chandrasekaran and Sharma are based at the Illinois Sustainability Technology Center (ISTC), a program of the Prairie Research Institute at the University of Illinois. They presented their research in a paper titled “Materials and energy recovery from e-waste plastics,” published in February in the ACS Sustainable Chemistry & Engineering journal.

The team has worked on plastics recovery previously, targeting other resins and investigating the use of pyrolysis for materials that are not typically recovered in MRFs. After publishing a number of papers focused on that sector, the researchers came in contact with HOBI International.

HOBI processes mobile devices at a number of locations, including a Chicago facility near the researchers. HOBI leaders described to the research team how plastics in e-scrap are less frequently recycled than the higher value metals found in the stream.

“Most of the time it’s either incinerated or it ends up in a landfill,” Sharma explained. “We started researching how we can extract some useful polymer out of these plastics.”

Existing recovery methods often use other solvents and aim to dissolve the entire polymer, recovering the monomers for reuse. It can be “quite intensive, and not cost effective,” Chandrasekaran said.

There are also health and environmental concerns with existing practices. One common solvent, DCM, has a relatively low boiling point at about 35 degrees Celsius, and puts out carcinogenic vapor.

“We do not want to use some kind of solvent that, even at slight leakage, would threaten the environment,” Chandrasekaran said.

The team wanted to come up with a safe method of polymer recovery, and also wanted it to make use of a solvent that already exists and is commercially available. They set out on a research project funded in part by HOBI and by ISTC’s Hazardous Waste Research Fund.

Chandrasekaran and Sharma found their solution with the NMP solvent. It’s been used in the paint and petrochemical industries to strip off polymers in those applications. NMP has a boiling point of nearly 200 degrees Celsius and is non-carcinogenic. That means it can be heated to the point at which the polymers dissolve, without fear of vaporizing the solvent itself.

For the best results, the process should be used on plastics that contain polycarbonate and one other polymer, such as polyamide. NMP yields polycarbonate of high purity, suitable for reuse in a variety of applications including electronics, construction materials and more.

The process is less well-suited for more complex materials that include additional polymers such as ABS or PMMA.

“For those types of plastics we found we can still recover polycarbonate from it, but it’s not very energy efficient or economical,” Sharma said.

The team tested a pyrolysis method to convert those more complex mixtures into oil. Doing so reduces the solid content of the plastic to about 40 percent of its original mass, and that material can be landfilled.

Next, the researchers plan to investigate solvent reuse, to determine how many times NMP can be recycled before it loses its potency. So far, they’ve found that it can be reused at least twice without losing efficacy.

“Once we demonstrate it on a larger scale, this is something that can be done in a centralized facility,” Sharma said.