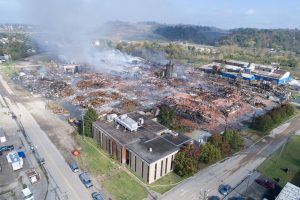 Fire crews have extinguished a blaze at a recycled plastics facility in West Virginia that burned for more than a week, shutting down businesses, government offices and schools.

The massive fire occurred at an Intercontinental Export-Import (IEI-Plastics) facility in Parkersburg, W. Va. It sent a plume of smoke over the city, forcing residents to stay inside due to air-quality concerns, drawing a visit from the governor and precipitating at least three lawsuits seeking class action status.

The Parkersburg News & Sentinel reports the site was used to store plastics and other materials that have not yet been identified. State regulators have ordered the company to provide information on which materials were in the warehouse.

Investigators are still working to determine the cause of the fire, according to news reports.

According to its website, IEI Plastics was founded in 1987 to buy and sell post-industrial plastics. It currently sells high-end feedstock and commodity goods domestically and internationally, and its services include grinding, optical sorting of pellets, toll processing, storage and more.