All eyes on optical

With the volume of recovered plastics rising and with more large materials recovery facilities (MRFs) coming on-line, the use of optical systems to sort plastics by resin and color is becoming more common.

Such demand and investment from processors has helped to push forward optical innovation. To help readers understand the state of sortation technology, this article offers a general status update. The assessment focuses only on optical methods and does not include hand-held resin identification devices or other technologies, such as electrostatic or machinery relying on density separation.

From agriculture to infrared innovation

Though it’s often framed as a method at the cutting edge of recycling technology, optical sorting itself is a 90-year-old sector. The original technology was developed to sort tomatoes, rice, coffee beans and other agricultural products.

In terms of plastics sorting, the first color sorters were used in the late 1980s to separate clear from green PET, and initial resin-identification units were brought to the market to sort PET and HDPE containers. These new units replaced the crude burn and sniff resin-distinction method.

Optical separation can handle various forms of plastics, including bottles and other whole products or shredded material such as flake. Also, some units sort plastic pellets. Sorting machines are used in various recycling applications, including MRFs and plastics reclamation plants.

A typical system includes an in-feed conveyor; resin identification, using a sensor and a computer; and pneumatic separation. Such systems often use a metering device, such as a vibratory feeder or disc screen, to produce an even flow with little or no clumping.

In terms of general resin sortation technology, two methods are used: X-ray and spectroscopy. In systems relying on X-ray, the unit analyzes the plastics on an elemental level. This includes XRF technology (X-ray fluorescence).

In terms of spectroscopy, several technologies read various lightwave lengths, including Fourier transform infrared (FTIR), near infrared (NIR), midrange infrared (MIR) and Raman laser. These spectroscopy technologies beam a light or a laser onto the plastic and then measure absorption and/or refraction, given that different organic molecules absorb light at different wavelengths. They look for compounds, such as carbon-hydrogen, carbon-oxygen or carbon-carbon. That elemental information allows the machine to determine the plastic type and to sort accordingly.

Each optical approach has its merits and constraints. For example, XRF can detect bromine and chlorine, thus distinguishing between halogenated and nonhalogenated plastics. X-ray systems are also good at sorting very dirty plastic. However, as a whole, X-ray units are less prevalent in plastics sorting and tend to be better suited to metals identification.

A downside to the spectroscopy methods, meanwhile, is that they cannot identify bromine additives, such as those used as a fire retardant. Also, while FTIR and Raman laser methods offer more detail than NIR, and are better at identifying black and highly colored plastics, NIR is faster and cheaper, and it dominates the marketplace.

Plastics can also be sorted by color using vision technology, which employs cameras (often CCD linear cameras), and innovation such as visual-range spectrometry. 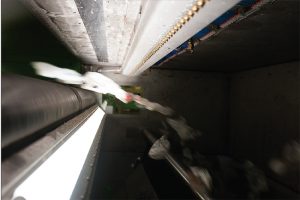 Innovation in optical sortation has occurred at a rapid pace. By one estimate, the number of equipment models available from manufacturers has grown four-fold in the past decade.

Many factors determine how effective and efficient a sorting unit can be at a MRF or reclaimer.

Material specifics help determine productivity. For instance, when operators aim to use a device for multiple sorting categories, the overall efficiency and processing capacity may be reduced.

Processors also note that size variability affects efficiency, with problems arising if the targeted materials are too small or thin. Thus, one unit might sort 7 to 8 tons per hour as it handles uniform material and moves it into several categories. But when the same device is used to handle multiple resins and lightweight plastics, throughput might drop to 2 to 3 tons per hour.

How is optical effectiveness being improved? In interviews with nearly two dozen experts, the following sortation findings and trends were listed:

The future of sortation

Optical sortation equipment makers and users point to a handful of operational factors that could change the industry over time. 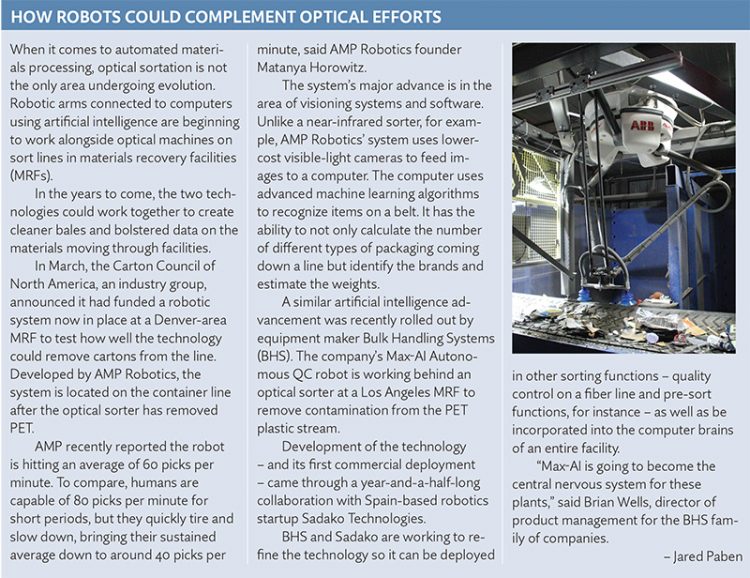 Equipment suppliers are focusing on new sorting challenges that have hindered the efforts of many stakeholders throughout the plastics recycling value chain.

The next stage of sortation will likely involve machines that can work faster and feature higher spatial and spectrometry resolution. Higher resolution is needed to handle the new packaging forms mentioned above. The challenge will be to capture these materials from the residential recycling stream and then further separate components.

The shifting nature of the plastics stream is something that will continue to be a key issue for processors. The optical solutions that will succeed in the marketplace will be those that can evolve alongside the material mix.

Jerry Powell is the founder and executive editor of Plastics Recycling Update, and he can be contacted at [email protected]. In the development of this article, technical experts at several firms provided comments, including those from B+B, EagleVizion, Green Machine, MSS, NRT, Pellenc, Sesotec and Tomra.