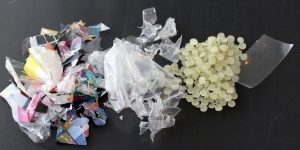 A Spanish company is rolling out a deinking technology capable of removing pigments from a variety of recovered resins, a step that eases processing and boosts value.

An executive at Cadel Deinking recently presented the patented technology at the Association of Plastic Recyclers (APR) Technical Forum, which was held in early March in conjunction with the Plastics Recycling 2017 conference in New Orleans.

Adriana Pineda Vazquez, who works in business development for Cadel, told the crowd her company has a pilot plant in Alicante, Spain, where it demonstrates the technology. The plant is capable of processing 220 pounds per hour.

The company and technology have their roots in a venture called Olax22, which owns a 50 percent stake in Cadel. Olax22 is a joint effort by the University of Alicante and Gaviplas, a plastics packaging converter. Cadel Deinking was started in 2014 to commercialize the technology. It started launching it to the market in 2015, when the pilot plant was built, Pineda told Plastics Recycling Update.

According to Olax22, the water-based deinking technology is patented in more than 20 countries.

“The innovative character of this project lies in the formulation of water-based products, which differs from conventional de-inking solutions formulated with a solvent base,” according to the Olax22 website. “The fact that the whole process is carried out with a water base represents a significant advantage from the economic and environmental point of view.” 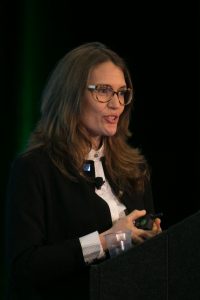 Pineda said inks impart color and odor, and they affect the mechanical properties of recycled plastics. They can also cause processing problems and add extra costs, she told the APR Technical Forum attendees.

Researchers’ goals were to avoid the use of solvents, make the deinking process as easy as possible and have the washing system circulate in a closed loop to reduce residue, she said.

After grinding, the plastics are introduced to a water-treatment system. In the system, they enter a deinking reactor where they’re exposed to the reagent before they’re rinsed with water to remove traces of pigments. Both the deinking solution and the rinse water are reused in the system. Then, the plastics are dried, melted, extruded and pelletized.

The deinking process allows reclaimers to use one degassing step, instead of two, Pineda said. One degassing step is still required because of residual humidity that remains on the washed fluff.

The technology also extends the life of a melt filter, she said. A packaging manufacturer could use it for in-house scrap recycling, or a reclaimer could use it to boost the value of recycled plastics it sells on the market.

The technology works on a variety of inks, regardless of whether they were included in masterbatches or printed onto a plastic. But the deinking solution can work on laminated packaging only if the layers are first separated so it can come in contact with the dye in inner layers. That’s an area where Cadel Deinking is currently researching.

“The results obtained at a laboratory level indicate that it is possible to separate the plastic layers and remove the ink that was between them, and so allowing them to be recycled,” according to the company’s website.

Cadel is working to commercialize the existing deinking technology by licensing it to third parties. It will either offer turnkey plants or provide instructions for assembling a deinking plant, Pineda said. That allows for adjustable processing capacities, depending on the customer’s needs.