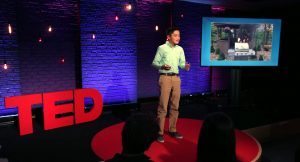 A process of recycling expanded polystyrene for use as a filter medium was the subject of a recent TED talk. But the presenter was a bit younger than your typical plastics recycling executive.

Ashton Cofer, one of four teens from Ohio who developed the patent-pending process, spoke during a six-minute presentation published online this month. He presented at a December 2016 event put on by the New York City-based nonprofit group TED, which helps spread ideas via on-stage talks.

The four youths won thousands of dollars in multiple high-profile contests for their research. They developed a process through which EPS is recycled into activated carbon with a surface area of 108 square meters per gram of material.

The youths won the 2016 FLL Global Innovation Award presented by XPrize, which brought them a $20,000 award.

They also earned a STEM-in-Action grant through a competition called eCYBERMISSION, which is sponsored by the U.S. Army. Teams winning those awards receive up to $5,000. A project write-up for that event includes details on their trials and the recycling process.

Additionally, the team won the Scientific American Innovator Award from the Google Science Fair competition. That award provided a $15,000 scholarship, to be split among the four teammates.

Plastics Recycling Update wrote about the team and its research when it was a Google Science Fair finalist.