What will Trump’s pick for EPA mean for recycling? 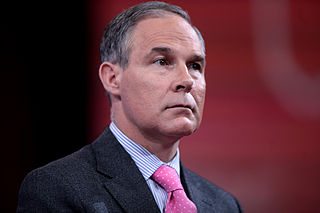 Pruitt has served as the Oklahoma attorney general since 2010. During his time in office, he has sued the EPA several times in an attempt to overturn federal regulations on coal, fracking and other fossil-fuel industries. Pruitt has been described as a climate change denier by The New York Times and other publications.

Resource Recycling could find no involvement or opinions from Pruitt regarding solid waste management or recycling. On the campaign trail, Trump made no specific comments about solid waste and recycling. His EPA comments were focused mainly on criticising the Clean Power Plan, which limits carbon dioxide emissions from power plants.

Michael Patton, a longtime conservation activist in Oklahoma, told Resource Recycling picking Pruitt to head the EPA “is like putting Satan in charge of the Church.” Patton worked for several decades managing one of Oklahoma’s largest residential recycling programs.

In addition, food waste reduction has emerged as a major talking point for the agency. Current Administrator Gina McCarthy and Mathy Stanislaus, the assistant administrator for the Office of Land and Emergency Management, which oversees waste management and recycling, have both spoken a lot on that subject. The EPA even held a conference with the Southeast Recycling Development Council on food waste in 2015.

The EPA has 15,000 employees, 79 of whom are political appointees. Of those, 14 require Senate confirmation — that includes Pruitt and Stanislaus, who was nominated by President Obama and confirmed by the U.S. Senate in 2009.