A quick stop for collection 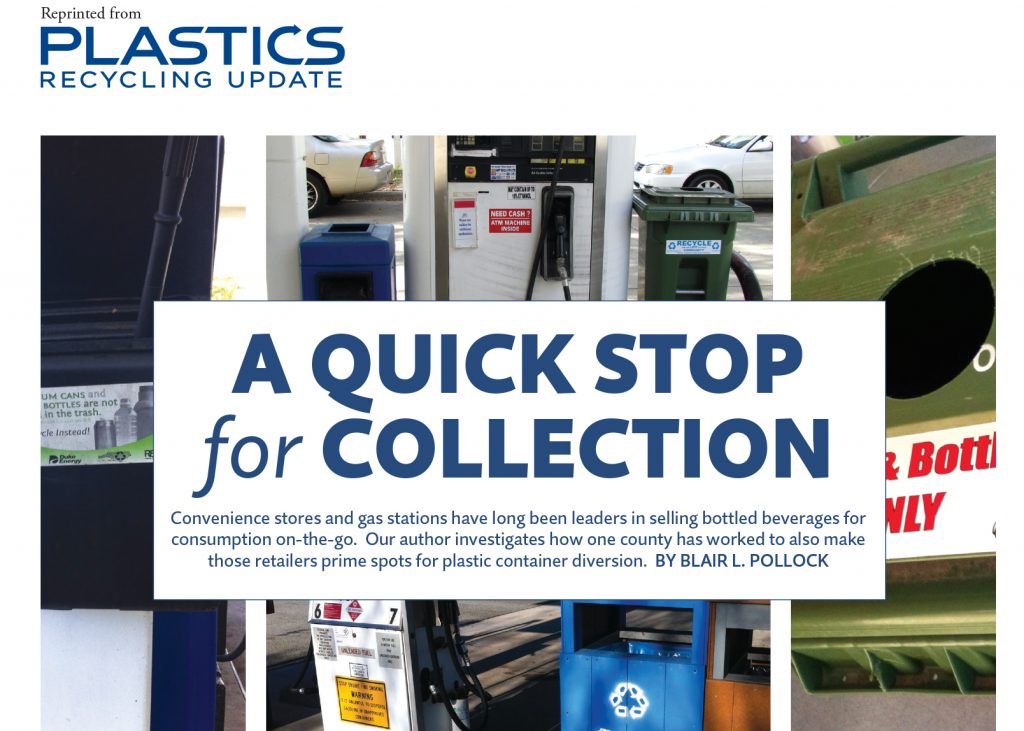 Analysis of plastic container recycling rates in North America often point to an inconvenient truth about convenience: Because plastic water bottles and other containers are designed to be easily utilized away from home, they tend to be discarded in environments without well-established recycling infrastructures.

How can the plastics recycling industry address this issue and set up more collection points in key locations? A well-established effort focused on gas stations in one North Carolina county offers insights on how local governments and businesses can work together to make plastics progress in the away-from-home environment.

For over 20 years, the Recycling Division of Orange County, N.C.’s Solid Waste Management Department has slowly been building a network of convenience stores that have recycling at their gas islands as part of advancing overall away-from-home recycling throughout the county.

Orange County is located in central North Carolina and has a population of just under 134,000. The county seat is Hillsborough, and the county is also home to the town of Chapel Hill, the location of a major University of North Carolina campus. Of the approximately 30 convenience stores with gas pumps throughout the county, 16 now have recycling collection and carts provided by the county.

The county’s informal program began with a single location that was serviced by a local curbside recycling contractor – the recycling program manager lived nearby, knew the store owner, gave him a blue bin and added the stop to the route. Simple enough start.

Many of the stores in the program utilize county-issued carts to collect materials, though the Cruizers chain chose its own style – a larger recycling container instead of a cart is located at each pump island. The NCDOT site, meanwhile, uses a homemade wooden bin.

The county estimates that over 700,000 cans and bottles are collected from these 16 stops each year, an analysis that assumes each cart is half full each time it’s collected. This convenience store infrastructure is complemented by pedestrian-oriented collections bins maintained along high-traffic areas in our three towns – Carrboro, Chapel Hill and Hillsborough. Recycling carts or containers are also available in every park operated by the county and towns. 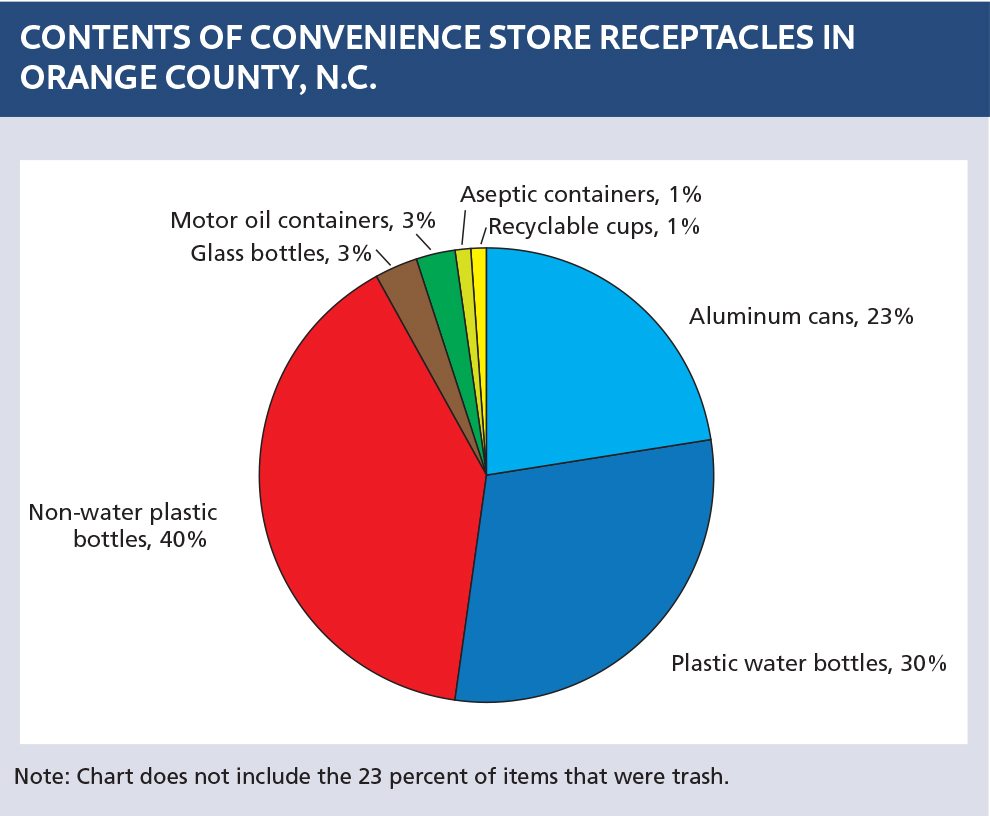 These locations together create a platform for a robust and well-used away-from-home recycling program that helps divert a significant number of plastic containers into the recycling stream.

In March 2016, county staff did a one-day collection sampling from eighteen recycling carts at six different convenience stores and found that 70 percent of items were plastic bottles, 23 percent were aluminum cans and the remaining containers were a variety that included some aseptics containers, recyclable cups, glass bottles and motor oil bottles. The local MRF has indicated it can handle those non-plastic and non-aluminum materials in small quantities.

The study also found trash made up 23 percent of the mix, or 87 of the 383 total items. Those are not included when calculating the percentages of recyclable material shown in the graph on this page.

‘A win for everyone’

The initiative has been a welcome addition for many retailers because it helps them meet customer expectations.

One newer participating convenience store brand is The Pantry, which is now part of the Circle K chain. The six The Pantry stores in Orange County have now been part of the program for a year.

“We have gotten great feedback from our customers in Orange County,” said Paul Stoner, regional director of operations at Circle K. “In our business, we not only create a lot of recyclable trash, we sell a lot of items that can be recycled and to be able to offer our customers a way to responsibly dispose of that is a win for everyone.”

Proving the success of container collection efforts at a few of the stores in North Carolina could have positive repercussions nationally – Circle K operates nearly 8,000 locations across the U.S. “I think many of our directors would be willing to offer this service to our customers as we continue to strive to be positive stewards of the environment,” Stoner said.

To bring more businesses into the fold, county employees recruit stores one at a time, the old-fashioned way: County representatives stop in, buy gas or snacks and ask the owner or manager if the business wishes to participate. Staff follow up via email or ground mail, offering a simple no-fee contract to assure stores’ engagement and understanding of the program.

While the answer more often than not from store owners has been “yes,” it is also useful for the county to understand the thinking of those who decline. 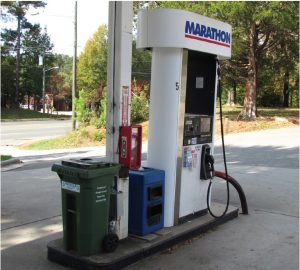 One operator stated he did not want his staff to have to “maintain” the cart as described in our contract. Thus, we later clarified in the contract language that stores are simply asked to wipe down the exterior of the collection receptacle and to call us if high levels of contamination are present. Even that apparently was more work than that one business wanted to take on, however.

One unexpected issue for participating stores was seen when the originally placed 35-gallon barrels blew away in a winter storm. The county replaced those donated barrels with repurposed 35-gallon rollcarts that had come out of service at government offices when converting to single-stream collection. We drilled a restrictive hole in the lid and drilled holes at the lid edge for cotter pins to prevent lifting the lid.

The biggest problem, however, may be that those carts are an “olive drab” green rather than the varying shades of blue that have become associated with recycling over the past 30 years since the origins of the blue box program in Toronto. And in fact, the county has otherwise stuck to the blue motif for all other county recycling containers.

The county has tried to solve that color conundrum by plastering the carts with stickers that identify them as recycling collection receptacles, stating “cans and bottles only.” We’ve found it is much simpler and easier to communicate this message than also using phrases such as “all clean, dry paper.” The result is relatively low rates of contamination given the fact that these receptacles are being used by people who are stopping for gas and taking that opportunity to clean out their cars.

Tool in the fight for more plastics recycling

Along with stickers on the carts, the county has tried with sporadic success to place a state-generated sticker on the surrounding trash containers stating that it’s illegal in North Carolina to dispose of plastic bottles or aluminum cans and they should be recycled. Sometimes the stickers are removed or ignored, but they do act as another “weapon” in the fight to capture recyclable plastics and other materials.

In 2009, the state passed a law adding plastic bottles – as well as pallets, oyster shells and oil filters – to a statewide landfill ban. In the wake of that action, the state reported doubling the plastic bottle tonnage recovered, so even though the ban is largely unenforced, the law initially had an impact. As North Carolina has not been successful in passing a bottle bill, we make do with using the law and, in Orange County’s case, by trying to make recycling as convenient as possible.

Blair L. Pollock is a solid waste planner for Orange County, N.C. He can be contacted at [email protected]