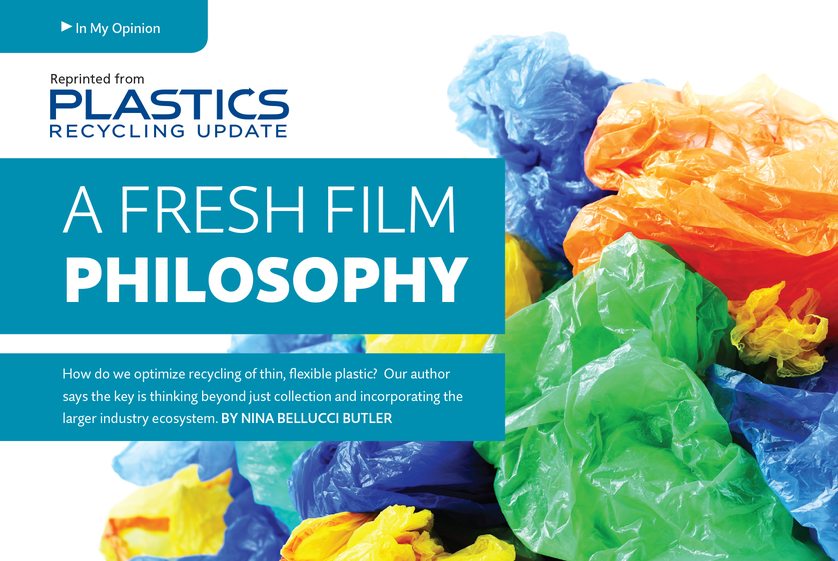 The debate over how to handle plastic film in the recycling stream is certainly nothing new to industry veterans. For years, local governments and haulers have seen the material in curbside bins, materials recovery facility operators have complained of plastic bags gumming up equipment, and return-to-retail efforts have gained traction when partners aligned on messaging and outreach.

Today, companies of all types are finding their niches in the film-recycling pipeline, and more than a few groups have formed to address plastic film recycling issues. All share a common goal of significantly increasing film recycling.

Fortunately, there is little risk of duplication as each entity is focused on a unique angle of the issue. However, a question remains: Will the efforts align, complement one another and allow stakeholders to finally overcome film-recovery challenges?

Why film recycling has struggled

The term “film” includes all thin, flexible plastic. Think plastic grocery, food-storage and bread bags as well as the overwrap used for bulk packaging of products like beverages, paper towels, bathroom tissue, diapers and air pillows. The vast majority of this film is made of LDPE or HDPE and is highly recyclable – if kept clean and dry.

Then there is multi-layer flexible film packaging, which is not so readily recyclable and is used for products like squeezable snack pouches. Multi-layered film is growing in usage as more brand companies switch from rigid containers to pouches in the quest for lighter, more efficient packaging.

A number of factors have contributed to struggles in collecting and recycling post-consumer plastic film over the years. These issues include the following:

Given all of the challenges above and inconsistent demand for PCR generated by recovered film, there has been limited investment in reclamation of scrap film. Therefore, there is little wash capacity in the U.S.

In addition, the changing film packaging stream creates a moving target and contributes to increasing contamination challenges for the reclamation industry. This fact further deters investment in reclamation.

A number of stakeholder initiatives have been launched in recent years to try to address those barriers and move the needle in the film recycling space.

For example, the goal of the American Chemistry Council’s Flexible Film Recycling Group (FFRG) is to increase U.S. film recycling from 1 billion pounds to 2 billion pounds by 2020, and it focuses primarily on the challenges of awareness and access.

A flagship program for the FFRG is the Wrap Recycling Action Program, which is a multi-stakeholder awareness campaign involving partners such as government agencies, the Association of Plastic Recyclers and the Sustainable Packaging Coalition. Those are groups that can amplify messaging about the most responsible ways of handling plastic film: reduce, reuse or return to drop off as oppose to litter, waste or place in the curbside bin.

The move to prioritize return to retail over curbside collection is driven by low demand for unclean material, steady demand for high-quality material and the high cost of processing film in the MRF.

Another project, Material Recovery for the Future, seeks to develop solutions for flexible film processing at the MRF level. Some quantities of film will always end up at MRFs so solutions are needed. The effort is backed by resin makers and brand owners that exist in the flexible film space, and it’s testing different sortation methods to try to find ways to reliably handle the packaging.

It makes sense there would be a mix of strategies to try to overcome plastic film barriers. As with other materials, silver bullet solutions are rare when it comes to increasing film recovery. The long-term solution will likely consist of a hybrid collection strategy.

Why not shoot for the most usable stream of feedstock by collecting film so that it remains clean and lightens the load on our MRFs? There is a segment of society that’s motivated to do the right thing and will likely take the steps needed to keep film clean and out of the waste stream if they are properly educated.

Of course, there are those less motivated. And there is the fact that some film is not clean. Stores will absolutely reject at-store collection if food contamination becomes an issue. In this way, pouches pose risk to at-store collection.

That brings us back to the hybrid idea. We may eventually reach a point where we aim to direct pouches through the MRF while retaining a return-to-retail system for clean, dry stretchy film.

The magic of markets

However, within all the discussion about the best methods for collection, there is a caveat. If markets for recovered material are strengthened, the collection conversation changes dramatically. If there were strong markets for film, including pouches, it’s likely MRFs would take actions to separate a lot more of the material. 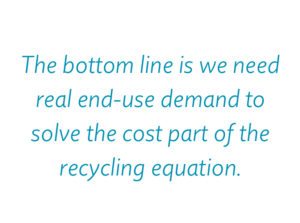 So how do we stimulate more markets for film? It’s impossible to control the price of virgin, which affects the price of PCR, but we can encourage more use of PCR. Currently, brand companies that produce products that consume a large portion of the market for polyethylene (the majority resin used in film) have little demand for PCR. This lack of appetite comes from the fact their products have very narrow specifications as they strive for lighter, better packages.

It’s difficult for trade associations to invest in market development. Many celebrate the Closed Loop Fund and hope the initiative can fill the development need. The Closed Loop Fund provides funding (mostly loans but also grants) to stimulate growth in the processing of a variety of materials, including film (polyethylene as well as multi-layer film). With backers such as Walmart and Goldman Sachs, the group has high-impact goals, such as building replicable models of municipalities unlocking additional investment in recycling. If the group can support new markets, it could have a significant impact on addressing the biggest challenge for recycling of films and all other plastics – demand for recycled material.

At the same time, a key element in creating a reliably robust film recycling system over the long term is strong direction on design for recycling. Such direction ensures reclaimers end up with material that actually can become the building blocks of high-value PCR. The Association of Plastic Recyclers has a history of filling this role through its Design Guide for Plastics Recyclability, test protocols and awards for plastic packaging innovation that harmonizes with the current recycling industry.

Our MRFs are struggling to handle the ever changing stream of material. What would the process look like if the entity using the material was connected to the entity producing and processing the scrap? That type of collaboration and communication through the chain is what can really fuel growth of film recovery.

Taking a cue from nature

We need to connect the material processing dots and realize innovations that enable greater use of recycled material in new products. Natural ecosystems do not waste, and the plastics ecosystem should operate similarly.

The bottom line is we need real end-use demand to solve the cost part of the recycling equation. Collection is not recycling, and funding only collection will fail to enhance the plastic film recycling ecosystem as a whole.

Nina Bellucci Butler is managing director at consultancy Moore Recycling Associates. She also serves as a technical and strategic advisor to the American Chemistry Council and was integral in the development of the Wrap Recycling Action Program, a public/private partnership to increase plastic film recycling. She can be contacted at [email protected]